A new trial testing a novel HIV therapy has seemingly cured a 44-year-old man, one of 50 participants. Five UK universities collaborated on this therapy, which is said to attack the virus even when it lies dormant. Usually HIV likes to hide in CD4+T lymphocytes—a certain type of white blood cell. But so far, the virus is undetectable in the man’s blood, according to The Sunday Times.

Until now, only one person has been verified HIV-free after contracting the virus. In 2007, the so-called “Berlin Patient” received a stem cell transplant to treat leukemia. Afterward, his doctors were astonished that Timothy Ray Brown no longer showed any sign of infection.

To treat Brown, doctors first used chemotherapy to destroy the cancer. This would have demolished his immune system as well, particularly those white blood cells where HIV tends to hide. Next, Brown was given a bone marrow transplant to replenish his white blood cells. The donor was later found to have a genetic predisposition to resist HIV. Despite not taking drug therapy anymore, no HIV has since been detected in his system.

HIV/AIDS research had stalled by the time. Medical experts called it all but incurable. Brown’s case gave renewed hope and researchers a new avenue to explore. Now it seems a London social worker may be the first to have been purposely cured of the virus. 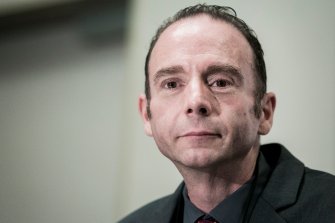 Timothy Ray Brown, the “Berlin Patient,” was the first to be accidentally cured of HIV.

The trial is ongoing. These are preliminary results. It won’t be finished and published until 2018. But according to Mark Samuels, the managing director of the National Institute for Health Research, so far experts are reservedly enthused. “We are exploring the real possibility of curing HIV,” he said. “This is a huge challenge and it’s still early days but the progress has been remarkable.”

Researchers at Oxford, Cambridge, University College London, King’s College London, and Imperial College London collaborated on the study. A vaccine or a cure has been wanting for decades. A crafty enemy, HIV/AIDS has proven one of the most complex diseases medical science has ever confronted.

The virus attaches itself within a cell, and using the cell’s own DNA it hides and replicates. Antiretroviral therapy (ART) is the treatment commonly used today. It stops the virus from replicating. Yet, it does not affect dormant viruses. HIV has the ability to hide for months, years, even decades undetected. This has made it difficult to cure. And the slow speed at which the immune system learns to protect itself from the virus has made a vaccine all but impossible. 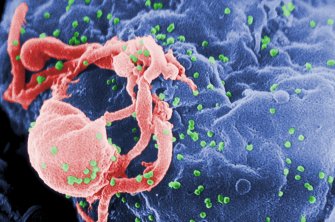 The green dots are HIV attacking cells in the immune system.

Though it seems like the pandemic of yesteryear, the need remains great. 37 million people are infected worldwide, according to the WHO. Certain hotspots such as sub-Saharan Africa have been crippled by it. This first cured patient gives many around the world hope.

Imperial College’s Sarah Fidler was a consultant physician on this study. She was cautiously optimistic. “It has worked in the laboratory and there is good evidence it will work in humans too, but we must stress we are still a long way from any actual therapy,” she said. Even if it is successful, five more years of testing are required. Even so, those who lived through the HIV/AIDS crisis of the 1980s and 90s revel at the idea of one of history’s most infamous illnesses coming to an end.

The first ever recorded HIV case in the U.S. occurred back in 1979. The media began to really take notice a little later, in 1981, when gay men in Los Angeles and New York started coming down with a mysterious disease. It gave flu-like symptoms, even though patients seemingly, had healthy immune systems.

A world map of people living with HIV/AIDS.

By 1982, after much hysteria, the term “acquired immunodeficiency syndrome,” was born. The first AIDS clinic opened that year too, in San Francisco. But it wasn’t until the 1984 that it was discovered that a virus was causing it. In 1985 the FDA approved a blood test to screen for HIV.

By 1994, the virus became the leading cause of death for Americans between the ages of 25 and 44. Regardless, it wasn’t until 1997 that an effective therapy was available. That year, highly active antiretroviral therapy (HAART) drugs became available, the first o inhibit the virus’s ability to replicate.

The FDA approved Truvada in 2012. A combination of two different drugs, those on it can lead normal, healthy lives, as long as they take their medicine regularly. But it cannot rid the body of HIV. It can however, block transmission to other partners, which is why some in high-risk populations take it to protect themselves. For this use, it is known as pre-exposure prophylaxis (PrEP).

Still, there remains a lack of knowledge about the therapy, since the manufacturer doesn’t advertise it. Others stay away, for fear being stigmatized for taking it. So even though it can be controlled today, a cure would change the calculus of HIV entirely.

To learn more about HIV resistance, which led to this discovery, click here:

It turns out it’s hard to make work at an Amazon warehouse fun.
Up Next
Neuropsych

A recent study from Yale University find that dogs are better at resisting peer-pressure and filtering useless information than human beings – but there’s value in that human flaw.