There are a couple of shirts I should never expect back, according to my wife. Instead of being miffed, I should be happy. A study out of the University of British Columbia (UBC) finds that women derive comfort from the smell of their partner. It helps relieve stress. While the smell of a strange male triggers the opposite effect. The results of the study were published in the Journal of Personality and Social Psychology.

The olfactory system is one of the oldest and perhaps most developed. It also draws up some of the most potent memories. Previous research has shown that another person’s scent can cause feelings of attraction. But until now, nothing was known about how it effects the stress response. So UBC researchers decided to look into it.

Marlise Hofer was the study’s lead author. She’s a graduate student in the university’s Department of Psychology. “Many people wear their partner’s shirt or sleep on their partner’s side of the bed when their partner is away, but may not realize why they engage in these behaviors,” she said in a press release. “Our findings suggest that a partner’s scent alone, even without their physical presence, can be a powerful tool to help reduce stress.” 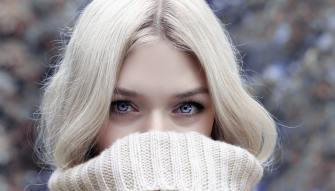 Women often instinctively wear their partner’s shirt and gain stress relief from it, without knowing why. Credit: US Air Force.

To conduct the study, Hofer and colleagues rounded up 96 hetero couples. The men were given a new t-shirt and asked to wear it for 24 hours. They were also told to not use any deodorant or body spray, not to smoke, and to abstain from eating certain foods. These might interfere with their body’s natural scent. Next, the t-shirts were collected and frozen to preserve their aroma.

Then, the women were brought in. The female of our species is known to have a more prominent sense of smell. The ladies were asked to sniff a random t-shirt, either one that had been worn by their partner, a stranger, or one that remained unworn. The women weren’t aware of which one they were smelling.

Afterward, they were asked to take part in a stress test. This included a mental math exercise, a mock job interview, and answering questions about their stress level. They also each gave a saliva sample, which researchers used to measure their cortisol levels. Cortisol is the stress hormone.

Those women who had encountered their own partner’s t-shirt were calmer before and after undergoing the stress test. Women who identified the shirt as their partner’s had the lowest levels of cortisol. This lead researchers to believe the effect works best when a woman knows what it is she’s smelling. On the reverse end, those who’d smelled a shirt from a stranger had higher cortisol levels before and after the stress test. This might be an evolutionary response, Hofer said.

“From a young age, humans fear strangers, especially strange males, so it is possible that a strange male scent triggers the ‘fight or flight’ response that leads to elevated cortisol,” Hofer explained. “This could happen without us being fully aware of it.”

Assistant professor in psychology Frances Chen was the study’s senior author. She said that with people on the move so frequently nowadays, these results could give people a way to cope with stress when they’re far away from their partner. “Our research suggests that something as simple as taking an article of clothing that was worn by your loved one could help lower stress levels when you’re far from home.”

To learn more about the olfactory system, click here:

Related
Hard Science
Some earthquakes last for seconds, others for minutes — and a few for decades
What do you call it when the Earth shakes for three decades?
Sponsored
What childhood “money story” is shaping your financial behaviors?
Here are the signs that you inherited “money anxiety” from your parents.
The Present
The “maritime Indiana Jones” who salvages shipwrecks now wants to tow icebergs
Simple physics makes hauling vast ice chunks thousands of miles fiendishly difficult — but not impossible.
Neuropsych
Inside the brains of aging dogs
In a citizen science project, thousands of pet dogs are helping scientists to understand what happens to memory and cognition in old age.
Neuropsych
The most common source of awe might surprise you
It’s us.
Up Next
Mind & Brain
Time is actually slowing down and will come to a halt, says a radical theory
A theory proposes that the universe is not speeding up in its expansion but that time is actually slowing down.