Many of us have been enjoying the 2018 Winter Olympics in Pyongyang. All of the athletes there are pretty amazing, but the figure skaters stand out, especially if you’ve spent any time on the ice yourself. Their spins and jumps — especially their jumps — can be jaw-dropping to us mere mortals. Though few skaters are actually physicists themselves, they might as well be given their mastery of key principles of motion.

Though we may not be physicists ourselves, we can understand enough to appreciate some of the science behind their powerful and yet somehow elegant athleticism.

Spins are all about physics’ conservation of momentum, and though dazzling on their own, they’re also a critical element in skaters’ gravity-defying jumps. There are few physics concepts involved.

First, inertia. Newton’s first law states, “An object at rest stays at rest and an object in motion stays in motion with the same speed and in the same direction unless acted upon by an unbalanced force.” The degree to which an object resists the influence of such a force is its inertia. The moment of inertia in skating is the measurement of the distance the skater’s mass extends outward from the axis on which he or she is spinning. The further it is from the axis, the larger is its moment of inertia value.

Next, there’s momentum, the amount of force it would take to stop a moving object. And here’s the thing: Unless some outside force slows down the object, an object’s momentum is conserved, remaining constant.

In the case of a spinning object, or skater, the force is referred to as angular momentum. It’s the product of multiplying:

Let’s say — using simple numbers with no relation to the real world to make this easier to follow — that:

And so, this is what a skater does by pulling in his or her arms close to the body: The moment of inertia goes down, and the angular velocity, or speed, goes up.

You can try this for yourself if your chair spins by holding your arms out as you rotate and then pulling them in close to your body to reduce your mass — your chair spins faster. Or just watch.

This shrinking of a skaters’ moment of inertia during rotations is a big part of generating the requisite high speeds required for multiple spins during a jump, as well see.

The trust pair skaters must share is almost hard to imagine given the death-defying throws and potentially head- and spine-cracking death spirals. To calculate force the male skater needs to exert to remain anchored to the pivot point in the death spiral is a lesson in physics all by itself, according to Real World Physics Problems. It starts with these values. 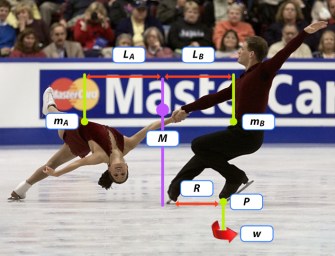 The pair can be considered as a single rigid body, and a new value we need is M’s centripetal acceleration, aC — the force with which M wants to push inward into the spiral, threatening to dislocate Pelletier’s skate anchored at P, in the current direction of the centripetal force. aC= w2R, that is, the rotation rate squared times the radius of the circle being traveled. With aC in hand, we can work out the force Pelletier would need to hold onto his toehold. 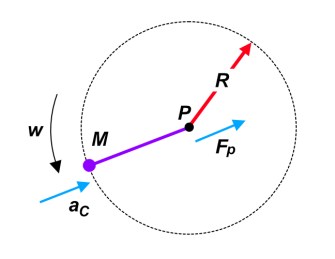 Most of these labels are familiar except:

The formula is Fp = (MA + MB)w2R, or Pelletier’s force plus the center of his and sale’s mass, times the rotation rate squared times the radius. Whew.

All of which is to say the man in a death spiral needs to apply only slightly less than his body weight to stay put, and thus crouches down for optimal leverage as his other skate lays sideways on the ice and his partner turns around him.

A good deal of the fun of watching Olympic figure skating comes from the astonishing jumps. For those of us not clear on what differentiates a lutz from an axel, here’s an explanation of what’s what.

There are six types of jumps, and they fall (poor choice of words there) into two broad categories, depending on the part of the skate from which the jump is launched. The number descriptors — quad, triple, etc. — refer to the number of rotations a skater makes while in the air.

Skaters don’t get super-high off the ground: Men tend to jump around 18 inches and women about 16 inches, according to Ithaca Collge sports science professor Deborah King. That’s compared to, say, a male basketball player who may reach 30 inches or a woman jumping upward around 24. (Hamidou Diallo has leaped over 44.50 inches!)

Interestingly, each skater gets pretty much the same amount of time in the air every time he or she jumps, so the number of spins is really about how quickly and effectively the skater can reduce the moment of inertia.

The leading skater when it comes to quadruple jumps these days is the U.S.’s Nathan Chen, who can quad the toe loop, loop, salchow, flip, and lutz. There’s some question if — and when — we’ll ever see a jumper hitting five spins in a jump. WIRED refers to the idea as “impossible, definitely bonkers.” 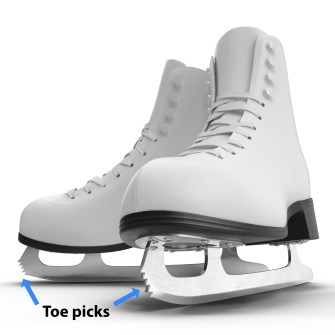 These jumps begin with the skater pushing upward from the jagged front edge, or “toe pick,” of their skate.

Skate blades actually have a groove called a “hollow” running their length, offering a skater two distinct edges — inner and outer — from which to jump. The front of the groove angles slightly inward toward the big toe, and its back outward toward the pinky toe. Jumping from an edge requires bending the knee and then propelling upward off the ice.

All of that having been said, there are the six types of jump — the examples below were compiled by Vox.

This toe jump begins with the skater moving backward on one foot’s outside edge, jumping from its toe pick, and landing the jump on the same edge of the same foot including the toe pick. Since he’s launching with the toe pick, he doesn’t need to bend his knee to push off.

The loop is much the same as the toe loop, but it’s strictly an edge jump: The bent knee reveals that the backward-moving skater is launching off that outside edge alone without the toe pick. He lands the same way.

The salchow’s another edge jump, from the inside edge of one foot and landing on the outside edge of the opposite foot.

In the toe-jump flip, the skater goes backward into the jump on the inside edge of one foot, and user the other foot’s toe pick to jump. She lands on outside edge of the first foot.

This toe jump is similar to the flip, though the skater lands on the foot whose toe pick initiates the upward movement.

This edge jump is the only jump that occurs going forward. It’s especially hard since it requires an extra half-rotation to position the skater to glide backward during landing. The skater jumps off from the outside edge of one foot and lands on the other foot’s outside edge.

While it’s easy to judge the value of a skater based on his or her athletic abilities, a skater’s technical score is just one half of the story, and there’s also an artistic judgment made. Of course, art is hard to quantify and for commentators to describe, so much of the focus remains on physical feats of skill.

It’s likely that the skaters themselves are aware of the physics behind what they do to varying degrees. For us, it’s fun to think about it, but in terms of the eye-popping performances at the Olympics and other top-line competitions, it might just as well be magic.

Compared to Earth, Mars is small, cold, dry, and lifeless. But 3.4 billion years ago, a killer asteroid caused a Martian megatsunami.
Up Next
Starts With A Bang

Ask Ethan: How Do We Know Space Is Expanding?

The Universe may defy our intuition, but that’s what science is for!If you take a look out at the Universe, and in every direction you look, you see objects rushing away […]