Sound like a science-fiction novel? It isn’t. It’s a study from several prominent biologists and researchers published recently in Science Magazine, and their research shows that cows have a standing chance of inheriting the planet if and when humans die out or leave. After humans started migrating out of Africa, the largest land mammals have died out in each territory that humans have spread to. It’s somewhat of a human hallmark, making other species extinct, although we’ve kept cows around for both food and leather. We’ve actually prioritized cows over other species, leading to a 1.5 billion total cow population across the globe. That’s more than cats and dogs combined: there are only 500 to 600 million dogs in the world and about as many cats.

If global warming keeps going at its current pace, Stephen Hawking estimated last year that humanity has about 100 years left to find a new planet to live on and only 1,000 years left on this planet before the heat completely kills all life. Pre human-kind meddling, larger animals simply adapted to climate change. But at this accelerated pace, species go extinct at an astronomical level. Between 24-100 species every day become extinct, and that’s a conservative estimate. Because there are so many cows on the planet, it’s fairly safe to say that even if all humans died out tomorrow all cows would have to do is graze and slowly move north as the planet got hotter. That’s conjecture, sure, but from a strictly numerical standpoint, there’s a good chance that cows will enjoy a very short time at the top of the food chain before the planet becomes completely uninhabitable except for cockroaches.

Will cow celebrities like Kownye West and Kim Cowdashian hold interviews with Anderson Coowper? Will cows hold elections, and elect their own JFC (John F. Cowneddy)? Will there be bovine novelists, like Franz Cowfka or Jack Kowerac? These puns might be silly, but the science isn’t: we better get our global warming under control or else we’re just building all this for cows.

And even if they do just take over all our stuff, they may not be able to enjoy it. Take a look at this Far Side cartoon (prophetic!), which may soon be less a funny ha-ha and more-so the harrowing and stark reality of a not-too-distant future: 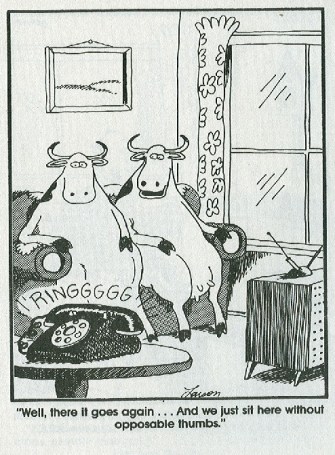 While most participants fibbed a little bit, laptop users were much more likely to lie – and by a lot more.
Up Next
Culture & Religion

Who is the biggest musician of all time?

After Beyoncé’s landmark Coachella performance, a look back at the biggest musical stars ever. It’s impossible to pick just one as the biggest, but fun to try.