Kittens and puppies growing up together isn’t that strange, but most people don’t imagine this with baby cheetahs in the mix.

The cheetah is the fastest cat, in terms of running. In terms of breeding, it might be one of the slowest, to the point where it doesn’t happen at all. National Geographic reported in December 2016 that there were around 7,100 left in the wild. This is close to complete extinction. The population got so low for several reasons, including poaching, desperate farm owners protecting their land, and also the nature of the cat’s panicky personality. Cheetahs are anxious and nervous. Equipped with thin bodies built for speed, they’d rather outrun enemies than put up a fight. Their jaws are not as strong as other cats, and their teeth are not as large, so if another predator comes along after a cheetah has made a kill, the cheetah will likely not defend its food. In zoos and habitats, the instinct to remain anxious and alert doesn’t leave, even if they are safe from predators. In this case, their energy has nowhere to go. They are stuck, jittery and restless, waiting for something to happen.

When cats are this nervous, they aren’t as likely to mate.

Many zoos, such as the Cincinnati, Columbus, Metro Richmond, and San Diego zoos, have had canines and cats cohabiting in order to save the species, according to CBS News. In 2013, the Dallas Zoo raised two cheetah kittens and a black Labrador puppy, only two days younger than the cats, together. 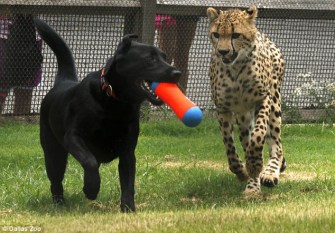 Pairing the animals for a new cross-species litter works because of the animals’ personalities. Though dogs and cats are very different, and dog people may not see eye-to-eye with cat people, it is clear that one can help the other by learning to be more playful and relaxed. The overall goal is for the puppies to teach these small differences of behavior to the cheetah cubs. They play together, and the dogs calm the cats when needed, as a litter mate, sibling, and best friend, through thick and thin.

This is not the only way that dogs have helped to save the species. The Cheetah Conservation Fund encouraged the use of large dogs, specifically the Anatolian Shepherd, on farms in areas of Namibia where cheetahs are native. Since cheetahs learned sometimes it is easier to sneak onto farmland for a good snack rather than hunt, most of the time farmers shoot them down to save their herds. However, the Anatolian Shepherd is scary enough to keep cats from creeping onto the land. With a bark, the cheetah goes running, and there is no reason for the farmer to harm the animal. Since 1994, when the use of the Anatolian Shepherd was first introduced in Namibia, the cheetah population has reportedly doubled in size. Right now it is possible to donate to the Conservation Fund, or even sponsor an Anatolian Shepherd to participate in the program.

While a trip to Namibia is likely not an easy option, heading down to the local zoo is. Many zoos now are hopping on the conservation train by bringing in dogs to stay with their cheetahs, often adopted mutts from local shelters or they are sometimes Labradors or Shepherds. Now it is easy to witness the unusual dual-species friendship firsthand. It is heartwarming enough to see from the CBS news video, as a Labrador dog cuddles and licks a cheetah after surgery. The caretakers even stressed that they believed the cub wouldn’t have made it without her canine sibling. While dogs and cats might be neighborhood enemies, in the game of conservation, their friendship can save the species.

Cause of worst mass extinction ever found

A new study reveals what caused most life on Earth to die out during the end-Permian extinction, also known as the Great Dying.
Hard Science

42,000 years ago Earth experienced “end of days” with mass extinctions

A reversal in Earth’s magnetic field 42,000 years ago triggered climate catastrophes and mass extinctions. Can the field flip again?
Thinking

And if they could, would they care, asks philosopher John Gray in his new book.
Health

A new study finds that dogs fed fresh human-grade food don’t need to eat—or do their business—as much.
Up Next
Starts With A Bang

The nearest supernova of our lifetimes turns 30, and still shines