Malnutrition is a serious problem in the developing world. A lack vitamin-A for instance affects millions, mostly populations in Africa and Southeast Asia. Delivering a supplement to each person would be impractical and costly. Thanks to genetic engineering, scientists have now created golden rice. This is much like the rice these populations already eat, only it contains beta-carotene—the precursor to vitamin-A, potentially saving millions from ill health. This is only one of the many developments in an exciting new field known as biopharming, a process that uses genetic engineering to turn plants and animals into factories for the production of commercial or medical compounds. It is not to be confused with bio-farming or organic farming.

A plant or animal with genetic material not originally its own is called transgenic. DNA may be modified within a species, or genes may be transplanted from one species to another, resulting in a desired effect. This is a way of creating a lot of a highly desired substance at low cost. For instance, crops such as tomatoes, corn, and tobacco are now being used to produce high-grade, and highly sought after pharmaceuticals. Transgenic plants can also be modified for environmental purposes, such as removing toxins from polluted water or soil. 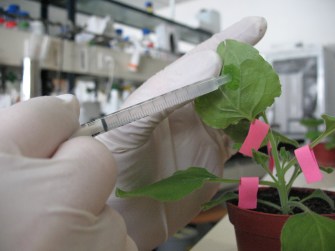 Biopharming is now an intrinsic part of agriculture. It seeks to improve the quality, shelf life, and nutritional value of food, while helping crops become pest-resistant, drought-resistant, and carry other desirable qualities. Genetically modified organisms (GMOs) are transgenic crops used for commercial purposes. Mass production of such food reduces costs.

It’s not all hard uses of course. There are whimsical possibilities as well. For instance, Suntory— a Japanese firm has created blue roses, which have been genetically modified using pansy genes. Modified microorganisms such as bacteria, fungi, and yeast are being used to create an enzyme used in cheese making. Historically, an element found in a cow stomach called rennet has been used to clot cheese. But since the demand for hard cheeses has surpassed all available rennet, another method was required to meet demand. The enzyme, called chymosin is popular among cheese makers today.

Animals are being used in biopharming too. Cows have been imbued with the ability to produce human antibodies. Once the animal is produced, collecting and purifying those antibodies is an inexpensive process. Insulin and other drugs based on human proteins are good candidates for biopharming as well, within animals. Goats too are getting into the act. There are goats that produce human antithrombin (ATryn), used to treat a rare blood disorder. This process has recently been FDA approved. On the commercial side, goats have been genetically modified to produce spider silk within their milk, the strongest material in the world. It will be used in bulletproof vests, and in medicine, to create artificial tendons. 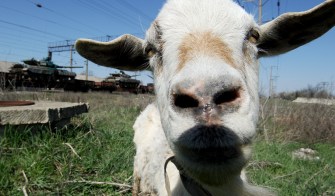 Today, the methods used to biopharm have a low success rate. In the future, when more reliable methods are worked out, researchers can use biopharming widely to produce drugs, antibodies, or vaccines. They can also produce biologics that are inexpensive, and even test new drugs without putting human subjects in harm’s way. One thing scientists are developing now are edible vaccines. For instance, vaccine carrying bananas are thought to be the perfect delivery method for children, particularly those in the developing world.

With GMO crops, there is some fear that they have been under-regulated, which could lead to unknown problems in human health, food production, or the environment. But GMOs have become so intertwined within our agricultural and food production systems that it is almost impossible to parse them out, especially when it comes to the ingredients of processed foods. Even so, the state of Vermont is currently being sued by agricultural giant Monsanto for forcing all GMO products to carry a label.

In medicine, some biotech firms say the opposite is true. Regulators are risk-averse when it comes to drugs produced through biopharming techniques. Even so, with a possible cure for Ebola and other serious illnesses being offered, biopharming is expected to become a normal fixture in medical science. Meanwhile, the medical establishment and regulatory superstructure must learn how best to accommodate it, utilize its offerings, and safeguard against possible hazards.

How to tell a child that the Sun will someday die

Image credit: public domain image from VaniaRaposo of Pixabay, via https://pixabay.com/en/mother-daughter-children-sunset-429156/.When they ask, will you tell them the truth, or something comforting? Why not do both!“It is possible to commit no […]