An asteroid about the size of a New York City block is flying between the Earth (you may have heard of it) and the Moon (you may have seen it) at about 6pm EST today. That’s “pretty damn close” by aeronautic standards.

The moon is about 252,088 miles (405,696 km) away — so about 30 planet Earth’s could fit between here and the moon. The asteroid will pass at almost the exact halfway point between the moon and here, about 126,000 miles away. You won’t be able to see it with the naked eye. But a hobbyist telescope, pointed in the right direction at the right time, should be able to see it.

The asteroid that wiped out the dinosaurs was 6 miles wide, so in the grand scheme of things this isn’t a world-ending space rock — it’s worth reiterating that asteroid happened to hit at the “worst possible” place it could have, as only 13% of the land on Earth could create that much dust which is what ultimately wiped out the dinosaurs by effectively forcing a nuclear winter. But while the asteroid that’s zinging past us today is only 900ft long, it’s still too close for comfort. Consider this: the meteorite that created the Barringer Crater was only 160ft long and created this: 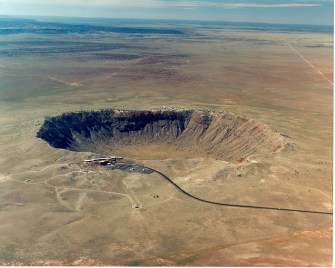 c/o Fossweb.com
Related
13.8
What kind of intelligence is artificial intelligence?
The initial goal of AI was to create machines that think like humans. But that is not what happened at all.
The Present
What’s effective altruism? A philosopher explains
Some effective altruists “earn to give” — they make as much money as they can and then donate most of it to charities.
Sponsored
How to avoid family fights about money
No family is immune to money conflicts, no matter how much they love each other. Here’s what to look out for.
L&D strategy
Best practices for a needs analysis [Templates included]
Conducting a thorough needs analysis requires care, curiosity, and open-mindedness.
Neuropsych
Memory and the benefits of forgetting
Forgetfulness isn’t always a “glitch” in our memories; it can be a tool to help us make sense of the present and plan for the future.
Up Next
Culture & Religion
Poll shows 66% of Brits couldn’t care less about royal wedding
Millions will watch on Saturday as Prince Harry marries retired American actress Meghan Markle, but a new poll suggests most Brits aren’t interested in the affair.