The Hubble Space Telescope has been dazzling us with stunning pictures of the universe since it’s launch in 1990. During that time it has revolutionized the way we think about the cosmos, providing evidence for black holes at the center of galaxies, proof of dark matter and Einstein’s theory of relativity, and the most detailed information and pictures of stars, planets, asteroids, and galaxies ever documented (discoveries which I detailed in a previous blog post entry IMAX Hubble 3D and the James Webb Space Telescope). But the Hubble, which celebrated its 20th anniversary last year, is set to retire in a few years and will be replaced by the James Webb Space Telescope.

But don’t count the Hubble out just yet. A few years before its final farewells, it is in the news once again by making a discovery that is fit for the record books. It hasn’t quite been confirmed yet, but it may have caught a glimpse of the most distant galaxy ever known. This new galaxy candidate is 13.2 billion light-years from Earth, which is roughly 7.75961975 × 10^22 miles. The confirmation of this new galaxy would edge it just above a previous discovery of a galaxy (UDFy-38135539) back in October that is just over 13 billion light-years away. Presently, Galaxy UDFy-38135539 currently holds the record for the farthest galaxy ever observed. Both galaxies were essentially discovered within the Hubble Ultra Deep Field which astronomers unveiled in 2004, calling it the deepest portrait of the visible universe ever achieved by mankind. Over a four month period (Sep 2003 – Jan 2004), Hubble’s Advanced Camera for Surveys compiled a million-second-long exposure that took approximately 400 orbits while taking two exposures each time around. The image in itself is quite amazing considering that it is estimated to contain approximately 10-12,000 galaxies in total. The image became so popular among amateur astronomers and star gazers that posters and prints of the Ultra Deep Field are available for purchase all over the Internet. 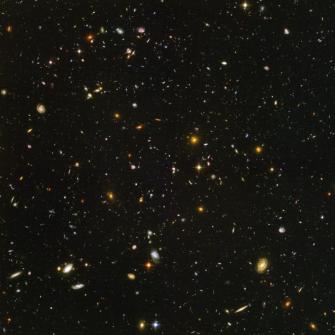 Rychard Bouwens, an astronomer from Leiden Observatory in the Netherlands, led the team that made the awe-inspiring discovery of this new galaxy by scanning a very small sector of the Ultra Deep Field—about 1/2 inch, or the size of a fingernail—for approximately 87 hours. “The idea that you can detect something from the beginning of cosmic time by looking at a patch of sky for 87 hours is just wild,” said Bouwens.

This is quite a big deal for those who study the nature and birth of our Universe. If this galaxy is really over 13 billion years old, then it existed just 480 million years after the Big Bang. The team is currently working on producing more detailed results of their findings, hoping to ultimately confirm these observations through further examination, which should be published soon.

The NASA image (displayed in this post’s thumbnail) was released on January 25, 2011 and shows an image of the candidate galaxy that existed 480 million years after the Big Bang (the z10 galaxy) as well as the position in the Hubble Ultra Deep Field (HUDF) where it was found. This HUDF WFC3/IR field — called HUDF09 because the WFC3/IR observations began in 2009 — is the deepest infrared image ever taken of the universe.

What the Tiger Mother Left Out

A cognitive scientist friend of mine made a good point the other day about Amy Chua’s assertion that “nothing is fun until you’re good at it.” It is, he said […]