Ask any archaeologist and they’ll tell you their job is a lot less whip and fedora and a whole lot more paperwork and cataloging. Sure, there’s the opportunity to get your hands dirty during an excavation, but much of the arduous work done by professionals consists of meticulous database management. It’s difficult work scanning everything you pull from the ground, and there’s a lot of data related to an object’s specs to track. It’s tedious work, which perhaps explains why Indiana Jones was always so irritable.

Luckily for all the real-life archaeologists out there, efforts are being made to simultaneously simplify and optimize the cataloging process. One major example is PRESIOUS, a collaboration between science institutions from Norway, Germany, and Greece, funded in part by the European Union.

PRESIOUS seeks to harness some basic principles of machine learning to revolutionize the organization and utilization of digital repositories. It allows researchers to create a digital scan of an object (rather than simply upload photos), and is augmented by a feature called “predictive scanning,” which works similar to the autofill feature in your search bar. Just as Google can accurately predict a search term before you finish typing, PRESIOUS will be able to fill in missing pieces of artifacts as they’re scanned. Predictive scanning will also prove useful in assessing the history and prognosis for an object with regard to corrosion and degradation. 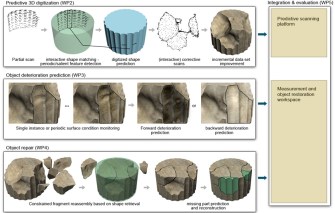 Let’s say, for fun, Indiana Jones had access to PRESIOUS when he recovered the Ark of the Covenant at the end of his first flick. A scan of the artifact could have given Indy details about environmental wear/corrosion, estimations of how broken pieces missing from the ark’s structure fit, and other important information for its further care. Of course, most objects uncovered by archaeologists are not as preserved (or spooky) as a fictional Ark of the Covenant, but you get the picture.

If successful, PRESIOUS could serve as a model for the next generation of cultural databases. Predictive scanning makes sense as an analysis tool in other industries like forensics and medicine. And easing the cataloging aspect of archaeology could grant researchers the opportunity to spend more time in the field, where they’ll no doubt continue the good fight against Nazis and child slavery.

Dogs Are Better at Reading Emotions than We Thought

New research demonstrates for the first time the domestic canine’s ability to discern between positive and negative emotions in humans.