Scientists have long believed that non-human animals care only about survival, spending their waking hours in search of food and engaging in activities that enhance their odds of survival in some way. Now a recent study in the Journal of Mammalogy of the way animals linger around their dead, and touch them, says we’re witnessing something much different than a survival instinct. It’s grief. They just don’t want to, well, say goodbye.

Co-author of the study, Melissa Reggente, a biologist at Italy’s University of Milano-Bicocca, told National Geographic the story of a bottlenose dolphin female seen carrying the body of a smaller dolphin — her calf? — through the Red Sea.

The study was compiled from 14 reports about the behavior of Indo-Pacific bottlenose dolphins, spinner dolphins, Orcas, Australian humpback dolphins, sperm whales, Risso’s dolphins, and short-finned pilot whales. The stories told of marine mammals encircling an adult seeming to mourn a calf, and of animals gently touching the dead with their fins.

In Science Alert co-author Robin Baird of the Cascadia Research Collective in Olympia, Washington, talked about an Orca who’d recently given birth seen carrying a dead newborn through the water. “She was trying to keep the dead calf up at the surface the entire time, balancing it on top of her head.” 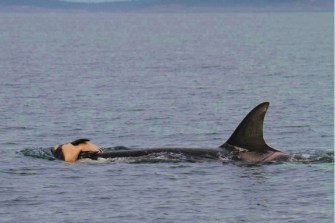 One of the reasons the report concludes that this is grief we’re seeing is precisely because these behaviors seem to have nothing to do with survival — it’s time spent not searching for food, for example.

It’s hard to be 100% certain we’re interpreting an animal’s behavior correctly, but with evidence mounting that animals feel emotions, it’s reasonable, and sad, to assume for now that they experience the sorrow of loss much the same as we do.

Having studied the ancient philosophers and their ideas of the virtues required to be an ideal man, Benjamin Franklin created his own list of thirteen virtues.