Virtually all young Danes have left the parental home by the time they're 34. Yet in Slovakia, almost 57% of young adults still reside in the Hotel of Mum and Dad. 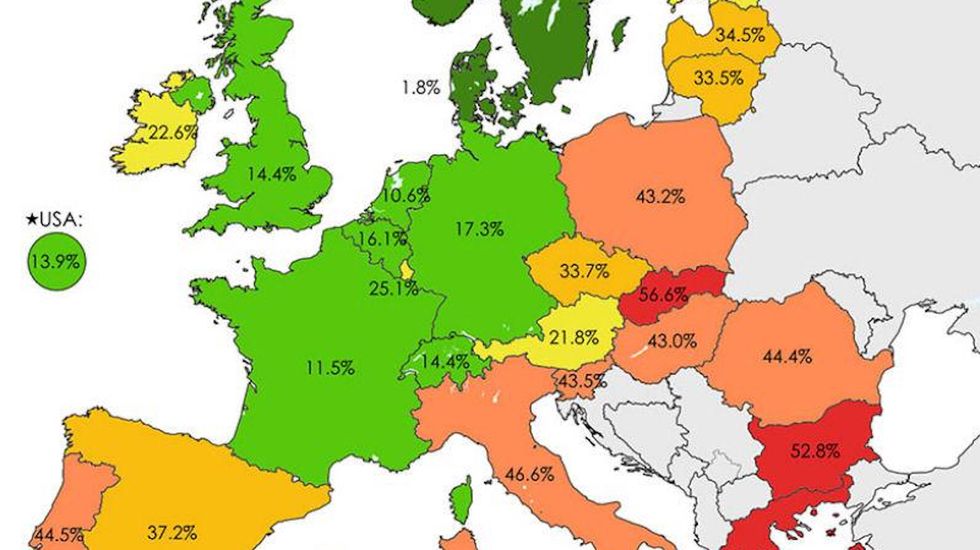 Who leaves the parental nest early, who stays longest? The divide is not just north-south, but also east-west

Less than 2% of Danes from the ages of 25 to 34 still live with their parents. That’s the lowest score in Europe. As this map shows, the rest of Scandinavia comes close, with just 4% of twenty-thirtysomething Norwegians, Swedes and Finns yet to fly the nest.

On the other end of the spectrum, more than half of Bulgarians and Greeks in the same age category are still under the parental roof. While that suggests a north-south divide in Europe between ‘leavers’ and ‘remainers’, there’s also an east-west fault line running through the continent.

In western Europe, most young people are quick to find a place of their own. Almost 90% of under-35s in France and the Netherlands have made their home away from home, as have around 85% of young Brits, Belgians and Swiss. Germans are a bit more reluctant to leave (or difficult to kick out), but still: 82% have left Mutti and Vati by their 35th birthday.

Not so their eastern European counterparts. Around 45% of Poles, Hungarians, Slovenes and Romanians from 25 to 34 years old are still living with their parents. The Slovaks are the anti-Danes: they hold the European stay-at-home record, with almost 57% of 25- to 34-year-olds still under their parents' roof.

The figures for eastern Europe bear more than a passing resemblance to those for southern Europe: Italy and Portugal are hovering around 45%, as are Romania and Slovenia (and Poland and Hungary), Spain's 37.2% puts it in the same decimal category as the Czech Republic (33.7%), Lithuania (33.5%) and Latvia (34.5%). Ireland's 22.6% is close to Estonia’s 20.2%.

Why are the Danes and other northerners so eager to leave home? And Why are Slovaks, plus so many others in Europe's east and south, so reluctant to leave the Hotel of Mum and Dad?

For the Danish question, two letters provide some of the answer: SU. This stands for Statens Uddannelsesstøtte, or Government Educational Support. This is the stipend all Danes can claim while pursuing their studies. Depending on their chosen education and living arrangements, they get up to $962 per month in SU. Which goes a long way towards paying to live away from home.

However, an (admittedly) random sample of Danes, all early home-leavers, argued that SU was not the determining factor – it’s just the 'done thing' in Denmark. Perhaps that’s how it always was, except that 18-year-old Danes no longer board longboats to go raiding in England. Could it be that this is what the SU was invented to suppress?

For Slovakia and other countries with high percentages of stay-at-homers, the theories are less fanciful, if all conjectural. One theory, supported by some of the comments below the original posting of the map on the MapPorn subreddit, would be that both cultural and economic factors are at play.

The map also includes a bubble with the average figure for the U.S.: 13.7%. Which means young(ish) Americans are about as eager to fly the nest as their British or French counterparts.

But of course, there are regional differences in the United States as well, as is shown by the map below. For good measure: it is only marginally comparable to the map above, as it uses a different age category (18 to 34), also includes young adults living with in-laws, and is slightly older (2012 vs. 2015).

According to the National Association of Home Builders, the share of young adults (18-34) living with their parents or in-laws increased sharply in the late 2000s, to about 1 in 3 (or more than 24 million in total). In both the 1990 and 2000 Censuses, that figure was closer to 1 in 4.

The reasons for the rising trend? According to the NAHB, rising college enrolment among younger adults, who then are more likely to remain at home; and for older adults, the inability to find stable, high-paying jobs.

At the other side of the spectrum, both below 20%: DC, thanks to its relatively stable job market; and North Dakota, with its booming oil economy. That state sits in the middle of a contiguous zone of 12 states with the lowest stay-at-home figures, from Minnesota in the Midwest to Oregon on the Pacific coast, and from Montana in the north down to Oklahoma in the south.