Is Your Best Friend a Bro, Dude or Buddy? It Depends on Where You Live 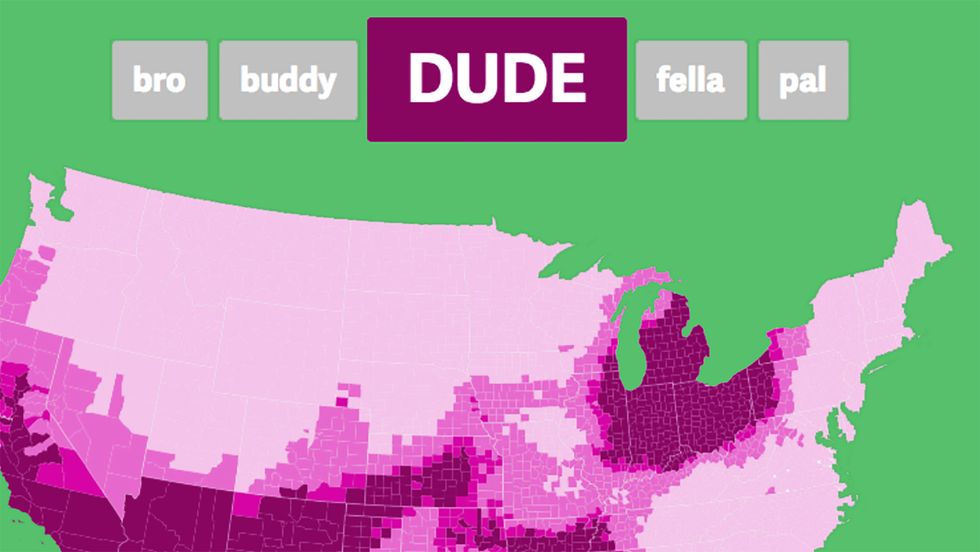 A man's best friend is his dawg. Or his pal, bro or buddy, depending on preference. And, more relevant for this blog, depending on location. Revealed for the first time, thanks to the big data generated by gazillions of tweets: the geography of dudeness.

Dude may be just one of many options the English language has for men to refer to their male BFFs. These maps show that it is by far the most widespread of five such colloquial vocatives examined by Quartz magazine. However, its fight for the hearts and minds of American guys – hey, there's another one – is not over. In certain parts of the country, bros, buddies, pals and fellas are firmly standing their ground.

These maps are based on quantitative research by Jack Grieve, a forensic linguist, and Diansheng Guo of the University of South Carolina. Using the location data attached to billions of tweets, they generated maps indicating where these five vocatives occurred most frequently, via a technique called hot-spot testing.

Perhaps counter to the intuition, these terms, all quite generic and equally brief, have very specific geographic spreads (see #679 for earlier, similar maps on the occurrence of uh and um in the US).

Texas is bro country. But the term also covers the entirety of Oklahoma, and almost all of Louisiana and Arkansas, plus good chunks of Kansas and New Mexico. A mid-sized gathering of bros straddles the Michigan-Indiana border, and a tiny bro community lives by the seaside on either side of the Virginia-North Carolina state line. As an abbreviation of brother, the term bro predates the colloquialism of the surf culture one would instinctively associate it with – unless the Elizabethans were already catching waves back in the 1660s, when its first use is attested. As one of the most stable words in the Indo-European language family, both across languages and in time, brother is a word with a large family, including the Old English broþor, the Lithuanian broterelis and the Old Persian brata.

As a term of familiarity rather than familial connection, it is attested from 1912 in American slang.

If you call your bro a buddy, you're most likely a Minnesotan, an Iowan or an Ohioan. Quite possibly a Kansan, an Arkansan or a West Virginian. And more than maybe a North Dakotan, a Nebraskan or a Kentuckian. Far out west in Montana, a lost tribe of Buddies is clinging to the Canadian border.

First attested in American English in 1850, buddy could be a modified version of brother, but also of butty, a British colloquialism for companion (attested from 1802) that may be linked to the early 16th-century term booty fellow, as in someone who shares in the plunder. Another possible source is the use of butty as 'work-mate' by miners in England and Wales from the mid-19th century onwards.

They may not be everywhere, but dudes are spread out across the nation both in numbers and regions like no other. Dudes rule coastal and southern California, but are surprisingly absent from the East Coast, where they originated. They rule the southwest, notably Arizona and New Mexico, but their presence across Texas contrasts with a curious absence in the central part of the state. It's as if this heart of dudeness was ripped from Texas and dropped in the Great Lakes states of Michigan, Illinois, Indiana and Ohio, which are as heaving with dudes as are Louisiana, Mississippi, Arkansas and Kansas.

The earliest mention of dude is from 1883, as New York slang for a 'fastidious man', possibly as an abbreviation of Yankee Doodle, after the dandyish protagonist of that folk song. Other theories relate it to Low German Dudendop ('fool, dunce'), Saterland Frisian Duddigegen ('idiot'), or duddies, the Scottish word for clothes.

Back East, the term was used especially fashion-conscious men, while out West, it described any urbanite who stood out from the rough-and-tumble locals. As quoted in this travel journal from 1883: "[The Montana cowboy] is convinced that a person caught in the act of wearing a white linen collar, and who looks as though he might have recently shaved or washed his face, must be a dude, true and proper".

After World War I, the Eastern word attached itself to the Western phenomenon of the 'dude ranch'. The term describes guest ranches catering to Easterners coming to indulge in the nostalgia of the Wild West, after it was safely won. The locals called these tourists tenderfoots, greenhorns or dudes. The latter word apparently lacked the negative connotation of the former two, since the industry in 1926 founded the Dude Ranchers Association (which is still active).

In the 1960s, dude was co-opted into surfer slang as a general term for any male person. From the 1970s, it entered the mainstream and is now used to address anyone informally, including females (variations such as dudess and dudette having waned in popularity).

The 1998 movie The Big Lebowski gave the term another popularity boost. Its protagonist, a laid-back loser known as the Dude (“or His Dudeness, or Duder, or, you know, El Duderino, if you're not into the whole brevity thing”) infused the term with a scruffiness quite the opposite of its original, well-groomed connotation.

Mississippi is the home of the fella, with significant spillover into Alabama, Louisiana and Arkansas. A smaller core of fella-ship is found in southeastern Indiana, leaking into Ohio and Kentucky. The last major concentration of fellas is found in a band cutting across Nebraska into Ohio. Cut off from the major centers of their preferred denomination, a small group of fellas straddles the Montana-North Dakota border.

Originally, a fellow is a business partner, someone who puts down money in a joint venture. The roots of the Old English felawe and the Old Norse felagi are fe (goods, money, fee) and lag (society, community). Used in a more general sense as 'any male person' from the 15th century onwards, although it is also applied gender-neutrally, for example in the King James Bible (Judges 9:37: And she said unto her father, Let this thing be done for me: let me alone two months, that I may go up and down upon the mountains and bewail my virginity, I and my fellows).

Men call other men pals in most of North Dakota and Minnesota, and contiguous bits of South Dakota, Wisconsin and Michigan's Upper Peninsula. And almost nowhere else, except for two remarkable exclaves: an island of pals centered on eastern Kentucky, and a toehold in southwestern Utah. There also seems to be a relatively high frequency of pals in and around New York City.

Pal is one of the few English words in common usage to derive from Anglo-Romani, the language spoken by Gypsies in Britain. Others include lollipop (originally: candied apple) and chav (derogatory term for working-class youth). It is related to (continental) Romani phral and Sanskrit bhrātṛ, and cognate with English brother and Latin frater.

In its first attested usages, pal described a partner in crime: “When highwaymen rob in pairs, they say such a one was his or my pal”, wrote G. Parker in 1789. Later, the term more neutrally referred to a friend or associate. “Guppy”, Dickens wrote in Bleak House (1853), “we have been pals now for some years!”

The Quartz article mentions some caveats to the research, one being that due to its widespread use in other contexts, the vocative reach of man could not be gauged. Which is a bummer, man.

The research does seem to indicate that fella and pal may have their best days behind them. Perhaps they will one day be replaced by imports from other parts of the English-speaking world. Vocatives like mate, bloke or chap. After all, one of the most generic vocatives of all, the ubiquitous guy, started out as the English catholic terrorist Guido ('Guy') Fawkes.

But perhaps future history books will overlook him for the triple vocative of the rather splendidly-named Californian musician, Guy Mann-Dude.

Many thanks to Toon Wassenberg for sending the link to the article on Quartz, and to its author Nikhil Sonnad for granting permission to re-use some of the images accompanying the article.

Britons could start receiving the vaccine within days.

Philosophers have been asking the question for hundreds of years. Now neuroscientists are joining the quest to find out.