No, this is not a post about Brexit – although the result is equally close. This is about how to pronounce the word scone. That’s a culinary conundrum on a par with other very British dilemmas, such as: Should milk or tea go first into the cup?  Or: Are jaffa cakes really cakes or are they really biscuits (1)? And, to return to that most divisive of baker’s confectioneries: What should you put on scones first, the cream or the jam (2)?

Scones are an essential component of the high tea – a booming business in the UK, currently worth £63 ($50) billion a year – as well as a popular snack on their own. However, widespread popularity has not generated unanimous pronunciation.

Two main, and often viciously opposing camps exist. Some are under the apprehension that the word is pronounced /ˈskɒn/, to rhyme with gone. Others cling to the notion that the correct way of saying the word is /ˈskoʊn/, which rhymes with bone.

Differences of opinion in the matter have been enough, according to the Oxford Dictionaries blog, “to end friendships, destroy marriages, and tear families asunder”. That sounds a bit too harsh – must be the philology talking.

But still: the belief in the justness of their cause is deeply entrenched on either side of the scone/scone issue. There are three reasons for the ferocity of the debate: (a) both variants are right, or at least, neither is wrong; (b) in Britain, your preference is fuelled by both geography and class; and (c) both sides are almost equally strong.

A recent poll by market researchers YouGov showed a slight, Brexit-like majority (51%) for scones of the gone-variety, with 42% going for scones like bones. But that is a national average. As this map shows – and like Brexit – there are large regional variations in the result.

Generally, the North of Britain and Ireland prefers the scone-as-gone variety, while the South goes for the scone-as-bone option. The division is clearest in Ireland, with the North gone-red and the South cone-green, and a relatively small yellow transitional zone in between.

The map clarifies that the divisions are much less clear-cut in Britain than in Ireland. A green barrier, from Stoke-on-Trent to Hull, is keeping the red zone at bay. This is the scone-as-cone heartland of Britain. 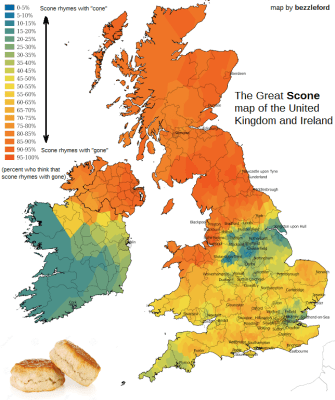 But Northern Wales is red, and although there is a green spot in and near Cardiff, the middle is a muddle of yellows, where the two varieties of scones are more or less equally widespread.

The yellow zone covers most of the South, with the other two colours peeking through here and there. Green-leaning areas are to be found in Cornwall, and in London and Essex. Red-led zones appear in Norfolk, Gloucestershire and Oxfordshire, Hampshire and East Sussex.

Here, the battle is less geographical than social. For the entire area examined, YouGov determined that the lower classes preferred bone-scones over gone-scones  45% to 26%, while the middle classes had a bigger preference for gone-scones (55%) – but were more evenly divided (40% of middle-class respondents preferring bone-scones).

The spread seems more homogenous in other English-speaking countries. Australians and Canadians tend to follow the British preference for the short-o version, while Americans follow the Irish in their option for the long-o version.

A survey by Oxford Dictionaries shows the divide between Britain and America. In results similar to the ones presented on the map, the British voters show a slight preference for scones that rhyme with con, while a large minority prefer cone. A smaller group – about 15% is fine with either pronunciation. In the U.S., over three quarters is pro cone scones, about 10% likes con ones, and an almost equally large slice is fine with either variety. 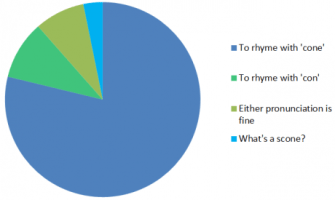 Perhaps unsurprisingly for a word with such a strong dual pronunciation, scone has multiple etymologies. One theory holds that is derives from Dutch schoonbrood (literally, pure/clean bread), another that it comes from sgonn, Scots Gaelic for a large mouthful.

Intriguingly, a third version links the confectionery to the town of Scone – the name of which is not pronounced to rhyme with either gone or bone, but like this. Perhaps at your next high tea, you could ask for some extra /ˈskuːnz/.

Many thanks to Andy Redfern for sending me this map, found here at Reddit’s Mapporn section. Andy is squarely in the gone-scone camp. Here is the relevant entry on theOxford Dictionaries blog.

(2) in the YouGov survey cited above, 61% said jam first, only 21% said cream first – as it should, in a traditional Devonshire tea.

After 10,000 years of civilization, have we figured out what virtue is?
Up Next
Politics & Current Affairs