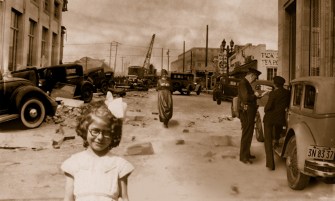 The Long Beach earthquake hit on 10 March 1933 with an estimated magnitude of 6.25 on the Richter scale.

Not if, but when

It’s not if, but when: Californians live with the certainty that someday, the Big One will hit.

The Big One is an earthquake with a magnitude of at least 7.8 on the Richter scale. Because of the plate tectonics at work under California, big quakes like that hit the area every 45 to 230 years.

The last one was more than 160 years ago. That’s why paleoseismologist Kerry Sieh says the next one is likely to happen “within the lifetime of children in primary school today.”

Here’s how the United States Geological Survey (USGS) rates the hazard of a major earthquake in California in the next 30 years:

It should be noted that the Richter scale is logarithmic in nature, meaning that a one-point increase in magnitude (e.g. from 6.7 to 7.7) represents a tenfold increase in amplitude. So, the Big One will be considerably stronger than the highest-magnitude quake considered by the USGS. When it hits, the Big One is likely to kill hundreds, hurt thousands and displace many more. It will cause widespread damage to buildings and infrastructure and start hundreds of fires. How do you put as much distance as possible between yourself and that apocalyptic prospect? Start with this earthquake hazard map. 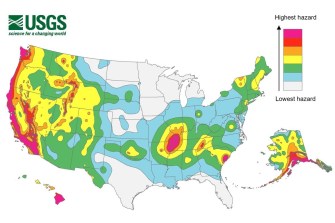 The earthquake hazard map of the United States.

The Pacific coast is purple: the highest hazard. The entire west is shaded in colors denoting declining hazard. Only relatively small parts of the country are covered by the zone of lowest hazard:

One state seems hazard-free, but that’s only until you notice the blue spot in Minnesota’s western bulge.

So, what do these colors actually denote? Earthquake hazard maps show the potential shaking hazard from future earthquakes.

The location of fault lines alone is not enough to determine quake hazard: a large earthquake can produce tremors at a relatively large distance from the actual fault line.

The colors on this earthquake hazard map correspond to Seismic Design Categories (SDCs), which reflect the likelihood of seismic activity leading to ground motion of various intensities. 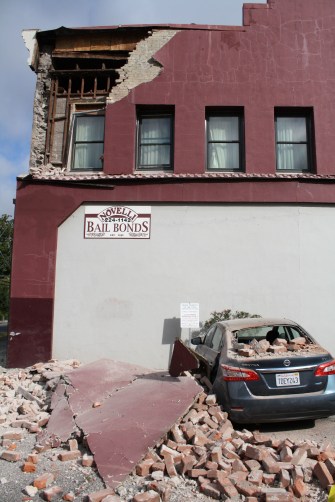 Damage caused by the 6.0-magnitude Napa County earthquake of 24 August 2014.

These SDCs are used to determine the level of seismic resistance required in building design and building codes. 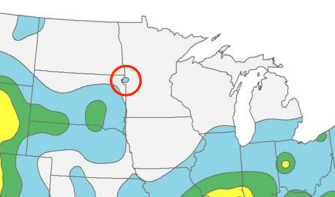 Minnesota earned its blue spot in 1975.

This earthquake hazard map is not a snapshot of the past, but an evolving prediction of the future. The map is adapted as geological knowledge increases. But it is also partly based on past events – or more precisely the likelihood of their recurrence.

Minnesota earned its blue spot from the 1975 Morris earthquake. With its epicenter in Stevens County, it struck at around 10 am on July 9th of that year and had a magnitude of 4.6. It was the first seismic event recorded in the state since the Staples quake of 1917, and it was felt as far afield as the eastern Dakotas and northern Iowa.

Near the epicenter, plaster cracked and pictures fell off walls. In the town of Morris, two homes suffered damage to their foundations. Not quite California-sized, but for lack of comparison, probably Big Enough for the locals.

Tags
californiaearthquakefault linesgeologymapsminnesotanatural disasterstrange maps
In this article
californiaearthquakefault linesgeologymapsminnesotanatural disasterstrange maps
Related
The Past
Here is the most terrifying pterosaur ever discovered
Meet your new flying nightmare: Thapunngaka shawi.
Strange Maps
Did dark magic conjure up the British Empire?
Esoteric evidence points to a ritual performed by Queen Elizabeth’s court magician John Dee.
Hard Science
Cracking a mystery about Vesta, our solar system’s second largest asteroid
How did the troughs form?
Strange Maps
Europe’s oldest map shows tiny Bronze Age kingdom
Discovered in 1900, the Saint-Bélec slab languished unrecognized in a castle basement for over a century.
Hard Science
Earth’s first puff of oxygen may be thanks to volcanoes
Scientists track down a puzzling early burst of oxygen on Earth.
Up Next
Health
There is scientific proof that foot fetishes are normal
Research dating back to the 1950s explains why the foot fetish makes total sense.