Educational attainment may be rising fast in the U.S., but it’s spread unevenly. There is a slight gender imbalance: more women than men have at least a Bachelor’s degree (35% vs. 34%). And a marked racial distinction, with 55% of Asian Americans aged 25 and older having Bachelor’s degree or higher.

But the variation is also geographic, as this map (based on 2016 data) shows. 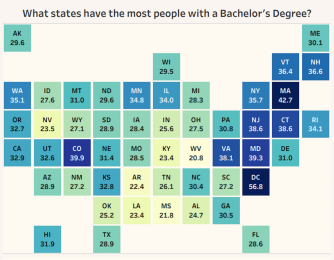 Educational attainment is linked to income. In 2016, the average median income as divided per highest attained degree was as follows:

We confidently state that the Universe is known to be 13.8 billion years old, with an uncertainty of just 1%. Here’s how we know.
Up Next
Technology & Innovation

Disney has plans to make the Star Wars galaxy the setting for the widespread introduction of virtual reality and augmented reality to the public at large.