The Disney organization is apparently hard at work — or is it play? — with plans to bring virtual reality (VR) and augmented reality (AR) to their Disneyworld and Disneyland parks (and to a few malls). The company has always been at the leading edge of entertainment technology, and, for whatever more down-to-earth benefits VR and AR may someday deliver, Disney VR is likely to be very entertaining. A lot of what they’re up to seems to involve their recently acquired Star Wars franchise.

VR and The VOID

The one we know the most about is called The VOID, a Star Wars virtual reality experience that Disney describes this way:

The VOID is a full sensory, immersive experience, with you, your friends and family walking around inside the action. It’s location-based entertainment – that means you visit one of our locations – and you walk into real-time hyper-reality that combines interactive sets, real-time effects and amazing technology.

Most of what we know about the attraction comes from Disney’s short promotional video.

The VOID seems to be based on an Oculus VR-type experience, though with much more stylish and George-Lucas-ian headsets. 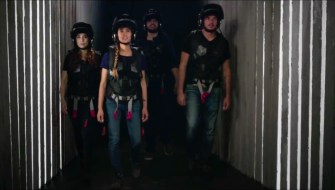 We can assume that in addition to feeding Star Wars VR to visitors’ eyes, it also treats their ears to binaural sound. Still, we don’t yet know how many speakers are in their battle helmets, and that will affect the realism of the three-dimensional soundscape. It doesn’t look like there are treadmill platforms for walking on, but instead, the action takes place in rooms that look a bit like Star Trek holodecks (heresy, we know).

From there, reality spins around the guests, with what would seem to be touches of AR that let them see themselves each other in the story. If virtual AR objects are layered into a VR world, is it still AR? Our heads hurt.

Behind the scenes, Disney must be throwing a tremendous amount of computing power at The VOID, scanning and visualizing the guests as it inserts them into the Star Wars VR action.

AR and the monorails

According to Orlando Weekly, it’s looking like Star Wars AR may also be incorporated into Disneys’ monorail system on which guests travel above Disney parks.

What’s known for sure is that a new monorail system is coming, as revealed by Disney “Imagineer” Bob Gurr. Referring to the current system as a “duct tape monorail,” Gurr announced that in about three years, we’ll see a new transportation system built by Bombardier. 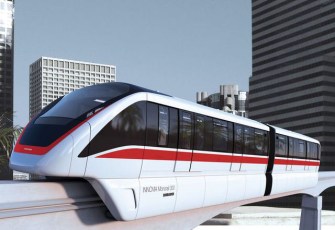 When the monorail passes Spaceship Earth, the Epcot structure could be transformed into the Death Star from Star Wars with X-wing fighters flying around it. He also mentions that the technology would be able to recognize if it was a cloudy day and the augmented view would then include clouds.

We’re not sure how welcome this will be, really. On one hand, it’s undoubtedly cool, and a compelling way to advertise The Void. On the other, Disney’s parks already produce sensory overload, and riding the monorail in its current form can be a way to take a leisurely birds-eye tour of the parks while decompressing. We’ll have to see how much people — including lots of tired, ready-to-blow wee ones, mind you — enjoy being pursued by X-Wing fighters.

Is Star Wars the best way to show people what VR can do?

Well, first off, if you’re a fan of The Force — you know who you are — there is only Do. Definitely yes. On the other hand, it’s primarily sci-fi aficionados who’ve already been experiencing VR in the form of Oculus goggles or something similar. For them, VR is not new news, though AR does retain its share of novelty, if not unfamiliarity.

Where the Star Wars universe makes terrific sense as the doorway to VR and AR for the masses is that it’s such a fully realized canvas in which to set the virtual action. Lucas and his authorial descendants have invented a complex, vast galaxy filled with a dazzling array of eye-popping locations, and guests of The VOID can go anywhere within it. Bonus: In the Star Wars galaxy — as in all actual galaxies — there is no definitive up or down, and so the potential for reorienting and disorienting visitors to The VOID’s virtual universe has got to stretch to, well, infinity and beyond.

Meanwhile, if you can’t wait, Chinese computer giant Lenovo is already selling an AR Star Wars headset. It’s gray, so you’ll have to decide for yourself whether you’re with the empire or the rebels.

Related
13.8
The weirdness of quantum mechanics forces scientists to confront philosophy
Though quantum mechanics is an incredibly successful theory, nobody knows what it means. Scientists now must confront its philosophical implications.
Neuropsych
Why is a Starbucks loyalty rewards program making customers so angry?
The rewards price to get a free cup of hot coffee at Starbucks is going up.
Empowering growth
7 essential management training topics for every team leader
From emotional intelligence to problem solving, these management training topics will set team leaders up for success.
Thinking
What if you could rewire your brain to conquer suffering? Buddhism says you can
For Buddhists, the “Four Noble Truths” offer a path to lasting happiness.
Hard Science
Solved: 500-year-old mystery about bubbles that puzzled Leonardo da Vinci
The solution involves the infamous Navier-Stokes equations, which are so difficult, there is a $1-million prize for solving them.
Up Next
Surprising Science
Scientists are trying revive woolly mammoth DNA to fight climate change
Scientists are investigating whether it’s possible to give modern elephants an ancient boost by reviving woolly mammoth DNA—all to curb climate change.