London's a shallow Christian sea with islands of other faiths​

Although London is predominantly Christian, this map shows an archipelago of different faiths throughout the city. 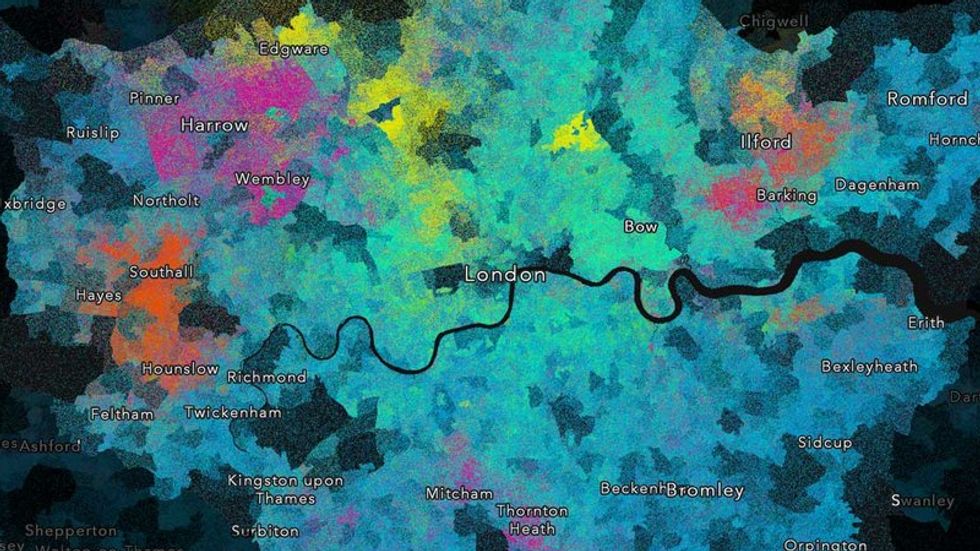 Religions are universal and transcendent, but they're also local and personal. This map shows where in London religious people live—quite often, very close to other people of the same faith.

Each dot on the map represents a single religious person. The different colors correspond to that person's faith. Blue is for Christian, turquoise for Muslim, and yellow for Jewish. A purple dot represents a Hindu, an orange one a Sikh, and a green one a Buddhist (red is for "other").

This map was created by cartographer Ben Flanagan, who chose the dot density method to illuminate the clustering of certain faiths in certain areas: "Dot density maps are really effective at normalising data by geographic area. This is because places with fewer people fade away, while densely populated areas become more prominent."

So, if London still looks like a Christian sea, it's a fairly shallow one—and dotted with large islands and archipelagos peopled by other faiths.

Mr. Flanagan repeated the method for other areas of the UK, including Manchester, Yorkshire, and Tyne and Wear. See more of his work here.