Pretty long. It is, after all, the longest country in the world. But why is it that long? And how long is it exactly?

Chile is as narrow as it is because of the Andes Mountains, which separate it from Argentina. That’s why the country is only 110 miles (177 km) across, on average. The country derives its length from the successful colonial expansion of the Spanish, and independent Chile’s own military successes. In 1818, when Chile broke free from Spain, the country comprised only the middle third of its current north-south extension.

In the 1880s, Chile triumphed in the War of the Pacific over Peru and Bolivia. It annexed Peru’s southern shoreline, and Bolivia’s entire Pacific coast, landlocking the country. Around the same time, Chilean troops pushed south of the Biobio River, conquering the indigenous Mapuche people, which had successfully resisted encroachment by both the Incas and the Spanish. This opened up the road to the southern tip of the continent. 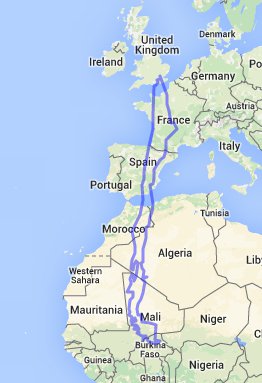 While that distance quoted above is more precise than ‘pretty long’, it still doesn’t quite convey the enormity of Chile’s extent. For that, there are these maps. 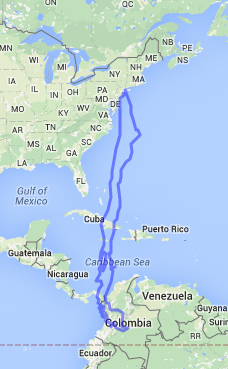 To put things in an American context: imagine you’re travelling from New York all the way down to Bogotà, the capital of Colombia. You’re flying past the entire East Coast, Cuba, Jamaica and Panama before you land. And when you get off the plane, no need to show your passport: you’re still in the same country. 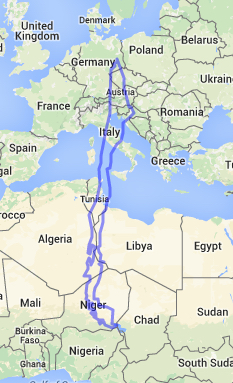 Other bizarre north-south pairings covered by Chile’s north-south extremities include a trip from Berlin to Lake Chad, the northern tip of Cameroon, coincidentally one of Germany’s former colonial possessions. Or the distance between Moscow and Eritrea, two places also linked by a prevalence of Orthodox Christianity and a robustly un-liberal governmental attitude towards press freedom. 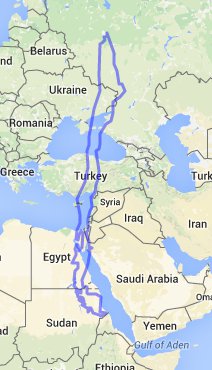 Or the road from Kiev, capital of Ukraine to the Upper Nile state of South Sudan – two countries locked in simmering conflicts with their erstwhile overlords. Or the long voyage from the Cape in South Africa to the Antarctic mainland, two places sharing, eh, well: penguins!

→ For an intra-European perspective on Chile’s length, Xideral sent in this map, commenting that “Arica, the northernmost city of Chile, could be located at Madrid, and also sharing hot climate. Otherwise, Punta Arenas the southernmost city, could be compared with Moscow, also with same cold climate features”. 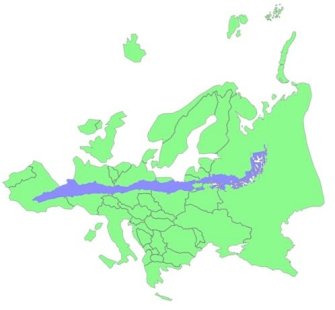 → “For American folks, I tend to explain Chile as the inverted (N-S) 100-mile-wide stretch of land from the top of the Alaska panhandle to the southern point of Baja California”, says Pablo Yanez. “This pretty much gets the climate regions that one can see in Chile”. Also: “I once had an argument with an Icelander that Chile has more glacier-covered land than Iceland. He wouldn’t believe me… but it does, by almost a factor of two”.

→ “I had the great privilege of seeing most of Chile’s regions, including Patagonia”, says Bob Hepokoski, who lived in the country for 15 years. “In my first visit to that extreme region, I remember encountering a surprising sight. Just a few kilometers fron the southernmost tip of the continent, there is a monument marking the geographic center of Chile! It claims to be the north-south midpoint of the nation. The monument is a white obelisk with a map of Chile that includes a wedge of Antarctica reaching to the South Pole”. 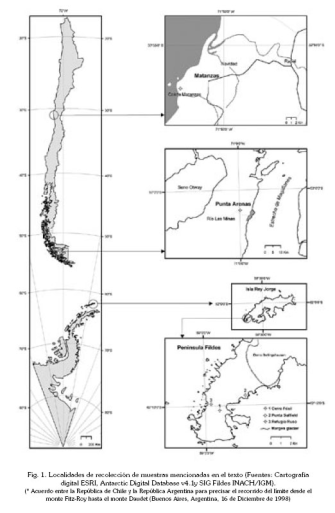 Map of ‘Greater Chile’ sent in by Mr. Hepokoski.

Chile’s claim is not only not recognised internationally, but also overlaps with similar claims by Argentina and the UK. Yet in Chile, Mr. Hepokoski says, official maps include the country’s Antarctic claim. “So Chileans boast of their country as being both elongated and fragmented”.

From politics to culture, we blame “tribalism” for humanity’s problems. This explanation is entirely wrong.
Up Next
Politics & Current Affairs

Who Made Beethoven Mad Enough to Un-Dedicate a Symphony?

If a politician’s broken promises ever broke your heart, Beethoven knew how you feel.