When Ludwig van Beethoven’s Third Symphony premiered in Vienna on April 7, 1805, the enthralled audience was oblivious to the tortured history behind the music.  Famous for his furious temper, Beethoven belonged to the Romantic generation of the early 19th century of Sturm und Drang (German for “storm and stress”), an era of political and artistic upheaval.  One man in particular, however, stressed Beethoven enough in those stormy times to make him strike out the dedication he had made for that Third Symphony, literally tearing a hole in the manuscript (shown above).  If a politician’s broken promises ever broke your heart, you’ll know how Beethoven felt when he was mad enough to un-dedicate a symphony. 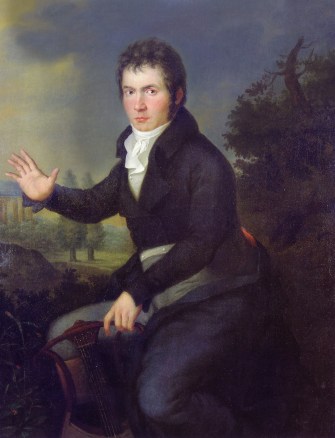 By 1804, when Beethoven began writing his Third Symphony, he was already a leading figure in the cutting-edge Romantic school of classical music.  We’re so attuned to Beethoven’s now-familiar music today that it’s impossible for us to appreciate just how revolutionary his contemporaries would have considered him.  As Jan Swafford’s recent biography Beethoven: Anguish and Triumph argued (and I reviewed here), Beethoven was “a radical evolutionary” who viewed his music as just another piece of the quickly building puzzle of an evolving Europe still trembling from the shake-up of the French Revolution. 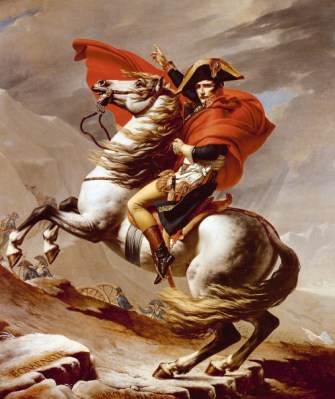 Like so many others during the time, Beethoven followed the career of Napoleon Bonaparte (shown above) with great interest.  As kings and queens fell, Napoleon rose from humble beginnings to lead France into a future built on democracy and meritocracy rather than royalty and bloodlines.  Recognizing a figure as charismatic as himself, Beethoven dedicated his next symphony to Bonaparte.  Even later, when financial concerns forced Beethoven to officially re-dedicate the Third Symphony to paying patron Prince Joseph Franz Maximilian Lobkowitz, Beethoven titled the work “Buonaparte.”  Money talked, but not loudly enough for Beethoven to disconnect the music from the man of the moment. Only one thing could break Beethoven’s infatuation with Napoleon—Napoleon becoming the thing he claimed he would end.  When Beethoven learned that his hero had crowned himself Emperor (and Josephine Empress; as shown above), he reportedly raged, “So he is no more than a common mortal! Now, too, he will tread under foot all the rights of Man, indulge only his ambition; now he will think himself superior to all men, become a tyrant!”  Beethoven took the manuscript to the Third Symphony and violently scratched out the remaining references to Bonaparte hard enough to rip through the paper (image shown at top of post).  The hole in the page matched the hole in Beethoven’s idealistic heart.

From that moment, the “Buonaparte” Symphony became the “Eroica” Symphony, dedicated to “heroic” men and women everywhere.  Sadly, the symphony’s been associated most often with the loss of heroic figures.  When President John F. Kennedy was assassinated in 1963, Boston Symphony Orchestra music director Erich Leinsdorf announced the news to the stunned concert audience before leading the orchestra in the Third Symphony’s second movement, a funeral march (video above).  Promises may be made to be broken, but political promises broken break hearts even harder.  Donald Trump recently claimed he could shoot someone and not lose voters, which might be the 21st century America equivalent of crowning yourself king.  Whatever your ideals (if you’re a “Trump-eter” or “Feel the Bern”), if you’ve ever pinned your hopes on a hero only to have them tumble from the pedestal, play that second movement of Beethoven’s Third Symphony (video below) and know you’re not the first (or the last).

A philosopher unpacks the paradox in using the word “evil.”
Up Next
Hard Science

Religious people are less smart but atheists are psychopaths

Your brain is the neural battleground of science and religion, with religious people and atheists differing in intelligence and empathy.  Can the two extremes reconcile?