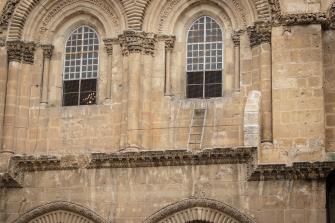 The most infamous ladder in all Christendom has been standing above the entrance to the Church of the Holy Sepulcher for about three centuries. Credit: Matthew Delaney, CC BY-SA 3.0

On a ledge over a church door in Jerusalem stands a simple cedarwood ladder. It’s been there for perhaps three centuries. Since nobody remembers who put it there, nobody knows who is authorized to remove it. If anyone would try, there’d be immediate trouble with whomever would feel slighted — and there are plenty of candidates. This is the Immovable Ladder, and it is a fitting symbol for the deeply-entrenched divisions within Christianity, and within that church building itself.

The most sacred place on Earth

Those religious divides matter here more than anywhere else because this is the most significant church in the world. For Christians of any denomination this is the most sacred place on Earth. This is the Church of the Holy Sepulcher, and according to tradition, it contains both Golgotha (or Calvary in Latin; both mean “skull”), the place where Jesus died on the cross. Just a few feet further is the tomb (a.k.a. sepulcher) where his body was laid to rest and where according to the faithful he was resurrected three days later.

Yet despite its supreme religious importance, there is no single authority managing this holiest of church buildings. The care over the sprawling, multi-level complex is divided between various denominations.

The church’s history goes back to the fourth century, when Roman emperor Constantine, newly converted to Christianity, sent his mother Helena to Jerusalem to locate places and things associated with the life and death of Jesus. This is the spot where she found the True Cross, a sign that this must have been Golgotha. The place of Jesus’ burial was identified nearby. Constantine razed the pagan temple built here by his predecessor Hadrian, and a church on this spot, the first commissioned by a Roman emperor, was consecrated in the year 335.

In continuous use for 1700 years

The church has survived earthquakes, fires, invasions, and demolition by decree. It has been in continuous use for nearly 1700 years, even if the building standing there today is mostly a renovation and reconstruction dating to Crusader times. Over the centuries, various Christian traditions latched on to the church. Ownership became a constant source of dispute. 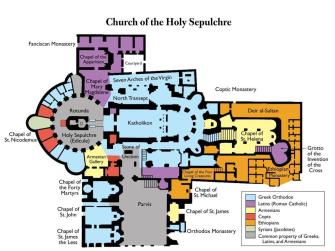 Six churches sharing one church. The result: a bit of a mosaic.Credit: British Cartographic Society

The Ottoman edict is the basis for the status quo, which is scrupulously maintained. A complex set of rules determines how the church is managed — such as who is allowed where and when, who cleans and repairs which parts of the building, and which areas are held in common (by the Greeks, Latins, and Armenians but not by the other three).

But some of the rules are disputed, and conflicts occasionally erupt. Two examples:

Can’t we all just get along?

In recent years, however, the churches seem to be getting along a little bit better, although partly out of necessity. Significant parts of the building are in extreme need of repair. In 2017, the three main denominations (Catholic, Greek, and Armenian) agreed to fix the Edicule, which was in danger of collapsing. And in 2019, the three churches signed an agreement to renovate parts of the church’s infrastructure (floor, foundations, and sewage pipes) and even to share ownership of any archaeological artifacts that might turn up during the work. However, the agreement excludes the three other denominations, which under the status quo have no say in the management of shared spaces.

Which brings us back to the Immovable Ladder. Despite its nickname, it has proven to be very movable indeed. It was stolen twice in the 20th century. Both times, it was soon recovered by the police and returned to its original position. In 2009, it was moved again, this time with the agreement of all relevant denominations, in order to accommodate scaffolding for renovations.

Upon completion of the works, it was again put back. And there it will remain until, as Pope Paul VI suggested in 1964, the divisions between the various Christian denominations are resolved. Or until Christ returns — whichever happens first.

Meanwhile, the keys to the church building itself will remain where they have been for centuries: in the possession of the Joudeh and Nuseibeh families, who by virtue of their Muslim faith are accepted by all Christian denominations as neutral guardians of the entrance to the church.

Discovered in 1900, the Saint-Bélec slab languished unrecognized in a castle basement for over a century.
Thinking

Are we born evil? St. Augustine and “original sin”

Augustine’s theology came to define Christianity, but there was a rival theology.
Strange Maps

In Louisiana, high school starts at 7:30 am. Research shows that is at least an hour too early.
Up Next
13.8

From the bowels of the earth to the sky: Rethinking civilization growth

A revolution of the mind must occur in order for humanity to succeed on a finite planet.