Rarely, if ever, do we stop to think about how remarkable certain everyday comforts are: to flick an electric switch and have light inundate a dark room; to turn on a faucet and have drinking water; to take a hot shower; to live in a home that is cool in hot days and warm in cool days; to step into a metal box and move wherever we want; to go to a store and buy food; to talk to someone across the world; to dump dirty clothes into a machine and have it wash it all. The list is endless.

Now, go back 150 years to 1871. Life was completely different. Energy was scarce; animals pulled plows and carriages; steam engines were beginning to flourish; technology was very primitive compared to today; medicine had yet to understand disease and sterilization. There were no telephones. Cars and airplanes were not invented yet. Light bulbs were still a laboratory curiosity. People drank crude oil as medicine. The first gasoline-fueled combustion engine car was still five years away, invented by Carl Benz, in Germany. The world population was about 900 million.

The pros and cons of technological progress

It’s an amazing story of success for our species. And of catastrophic environmental devastation.

Even if technological innovation has its roots in basic research, the driver for the transition from the lab to the marketplace is money. Growth is measured by sales, and sales generate profit. In the past 150 years, the gross domestic product per capita in the U.S., Australia, New Zealand, and Canada (known collectively as Western Offshoots) grew from $4,647 to $53,757 (corrected for inflation and measured in international 2011 prices).

What feeds these fat pockets? Fossil fuels, deforestation, mining, the depletion of the oceans, industrialized agriculture. The obvious truth is becoming clearer to a growing number of people: we live on a finite planet, with finite resources, and with a finite capability of cleaning the mess we make. The time of treating the oceans and the rivers as giant sewage dumps, the atmosphere as an endless sponge for noxious fumes, and the forests as inconvenient obstacles to be removed for expansive cattle grazing and agriculture is over.

I’m glad to be alive to witness our reinvention.

The essential question, then, is what can be done? Is it possible to maintain the current growth rate based on a profoundly different worldview, one where the fuel that feeds growth is not unchecked environmental destruction but a symbiotic relationship between our species and the planet we inhabit? Can the economy adapt to a new worldview before we inflict even more irreversible damage to the planet?

The first point to keep in mind is that we are not separate from the environmental devastation we perpetrate. If the environment goes, we go. We need clean air, clean water, and clean energy to survive. The more of us there are, the more urgent this obvious fact becomes. The inventiveness and resourcefulness that we have traditionally applied to industrial and warfare innovation must now be applied to our own survival on this planet. We need to reinvent how we relate to the world. We must move from the plundering mindset that sucked our prosperity from the bowels of the Earth to one that collects the energy that the skies serve us.

A revolution of the mind 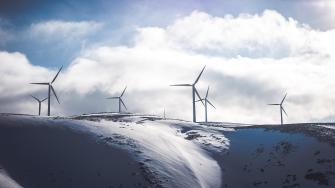 This change in mindset represents a reversal from an aggressive relation to the environment — the metallic machines that dig holes to suck fossil fuels from the underground — to one that embraces what is already here: the sun, the wind, and the carbon-fixing capabilities of forestlands across the world.

Last week, President Biden convened 40 world leaders to discuss our collective energy future. The current administration clearly represents the new mindset. We must change the way we think about economic profit being averse to renewable energy. The old worldview, based on the past 150 years of the industrial growth motto — that is, let’s consume the bowels of the Earth to get rich — is dead. It’s unviable. It’s unsustainable. It’s self-destructive. It’s immoral.

The changes to come will be as world-changing as the ones that exploded during the early 20th century with rampant industrialization: An economy based on the passive extraction of renewable energy from the skies; vast reforestation programs for carbon fixing; a complete overhaul of the auto industry toward electric and hydrogen-cell vehicles; a retraining of the workforce to adapt to the growing automation of production and to the need for versatility in the marketplace due to the new jobs of the digital age; a redesign of school curricula to retell the story of our relation to the environment to raise awareness among younger generations; and an emergent new ethics of life that embraces the planet and all living creatures we share it with as partners and not targets.

A decade or so ago, these views would be dismissed as utopic or at least naïve. But not anymore. The new worldview is taking root, and foolish is the country that won’t embrace it quickly. I’m glad to be alive to witness our reinvention.

Tags
civilizationenvironmentsustainability
In this article
civilizationenvironmentsustainability
Related
Life
Strange life forms create an “alien” ecosystem in an abandoned uranium mine
Slimy biofilms made up of bacterial and eukaryotic life forms have taken over an abandoned, flooded uranium mine in Germany.
The Present
Climate change is altering the chemistry of wine
Smoke taint from wildfires is gross, even to wine amateurs.
Life
Our antidepressant drugs are affecting animals and ecosystems
A toxicologist explains the impacts of antidepressants on fish — and no, they’re not getting any happier.
Hard Science
200 years of exploring Antarctica
What we’ve learning from the world’s coldest, most forbidding, and most peaceful continent.
Life
Most of the seafloor is a thick graveyard of ooze
Each year, several trillion pounds of microscopic silicon-based skeletons fall down the water column to pile up into siliceous ooze.
Up Next
Neuropsych
CBD provides pain relief through pharmacological and placebo effects
Cannabidiol (CBD) seems to reduce the unpleasantness of pain, a finding that surprised the researchers behind a new, first-of-its-kind study.