Street names can cause diplomatic offence - and sometimes, that's exactly why they're there. 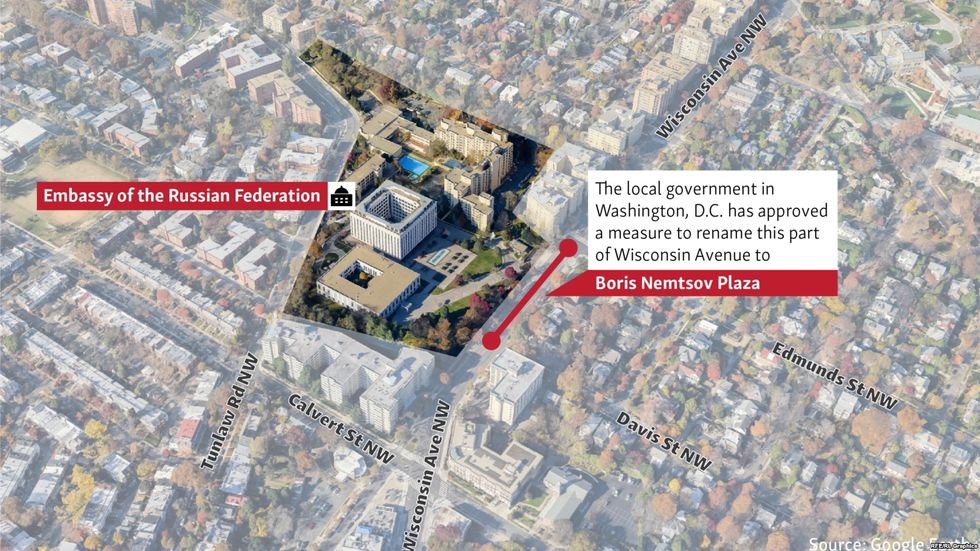 Mail to the Russian embassy in Washington may soon have to be addressed to ‘1 Boris Nemtsov Plaza’. No, Russia’s diplomatic mission to the U.S. isn’t moving from its current location on Wisconsin Avenue.

On Tuesday 9 January, Washington DC’s city council voted to change the name of the square on which the Russian embassy sits to honour the slain Russian democracy activist – and annoy the Russian establishment, all the way up to president Putin.

Weirdly, a virtually identical incident had occurred just a few days earlier on the other side of the world, with Turkey giving the street on which the embassy of the United Arab Emirates is located a new name, calculated to irritate the hell out of the UAE leadership.

As it turns out, re-naming embassy streets is a time–honoured way to irritate unfriendly regimes, short of expelling diplomats or breaking off ties altogether.

The name-change in Washington was unanimously approved by the Council of the District of Columbia – DC’s city council – in honour of Nemtsov, who served as Russia’s vice president under Boris Yeltsin but later turned into a vocal critic of Yeltsin’s successor, Vladimir Putin. On 27 February 2015, Nemtsov was shot dead just outside the Kremlin. Last July, five Chechens were convicted for carrying out his assassination, but many believe the real culprits remain at large.

The Council expressed the hope that a plaque with Nemtsov’s name could be placed at the designated location on 27 February, the third anniversary of his assassination. But the planned name-change still requires Congressional approval.

Nevertheless, the Russians have already been irked enough to threaten a countermove. Mikhail Degtyarev, a representative in the Duma, the Russian parliament, has suggested that the U.S. embassy in Moscow, currently at 8 Bolshoy Devyatinsky Pereulok (8 Greater Ninth Alley), should also get a new address. He proposed the new address should be 1 Severoamerikansky Tupik (‘1 North American Dead End’), “in reference to the U.S.’s intrusive foreign policy”.

Meanwhile in Turkey’s capital Ankara, 613th Street, where the UAE embassy is located, has recently been renamed ‘Fahreddin Pasha Street’, after the Ottoman governor of the holy Islamic city of Medina from 1916 to 1919.  Simultaneously, 609th Avenue, in front of the embassy, was renamed Medine Mudafii (‘Defender of Medina’) Avenue, after the same person.

The name-changes were ordered by Ankara mayor Mustafa Tuna, following a message on social media by Abdullah bin Zayed al Nahyan, the UAE foreign minister, which suggested that Fahreddin had mistreated Arabs and stolen their property while serving as governor of Medina at the end of World War I.

Nahyan had retweeted a post by a Germany-based Iraqi, claiming that

“in 1916, Fahreddin Pasha committed a crime against the people of Medina, stole their properties, and put them on a train to Damascus and Istanbul. Also, the Turks stole the handwritten books in Mahmoudia Library and took them to Istanbul. This is the history of (Turkish president) Erdogan’s ancestors and what they did to Muslim Arabs”.

Erdogan personally hit back at the minister, questioning his own ancestral heritage. “Where were your ancestors when our Fahreddin Pasha was defending Medina”, he asked via social media, adding that the alleged theft was actually “protecting the holy relics of the Prophet Muhammad from (British) invaders”.

Turkish-Emirati relations have been strained since Turkey sided with Qatar, while the UAE sided with Saudi Arabia in a diplomatic dispute between Gulf countries over alleged support for Islamic extremism.

One of the best-known examples of embassy street name changes took place in the early 1980s, following the Iranian Revolution. While the U.S. embassy in Tehran was invaded and its personnel held hostage by revolutionary guards, the British embassy suffered the lesser ignominy of having its address changed from Winston Churchill Avenue to Bobby Sands Street, after the Irish Republican hunger striker who died in British prison.

The street sign is still there, and indicates the name in Farsi script, which is transliterated as 'Babisandz Street'.

Sands, an IRA member from Belfast, died in 1981, after a 66-day hunger strike; just 27 years old. At his death, thousands in Tehran held a moment of silence in his memory. His struggle struck a chord in Iran: Sands was seen as giving his life for the fight against the same British imperialism and colonialism that was blamed for a lot of Iran’s own ills.

The Belfast hunger striker also lives on, incongruously, as the name-giver to Bobby Sands Burgers, since 1982 the name of a fast food joint on Babisandz Street. The joint’s orange-dominated colour scheme adds insult to irony: orange is associated with the Unionist cause in Northern Ireland, which Sands was fighting against.

A few doors down, British ingenuity has overcome the address issue: embassy staff knocked through a wall on Ferdowsi Street, creating a new address.

The Iranians recently repeated the trick – sort of – when Saudi Arabia executed sheikh Nimr al-Nimr, a Shia cleric critical of the Saudi regime, in January 2016. The execution triggered riots in Tehran, which led to the sacking of the Saudi embassy building. Later, a nearby street was renamed Nemer Baqer al-Nemer Street.

The street where the Saudi embassy is located is still called Boustan Street, however. Not that the building receives much mail these days: diplomatic relations between Saudi Arabia and Iran were broken off following the incident, and the Saudi embassy remains empty.

Earlier examples abound: in the 1960s, during China’s Cultural Revolution, the street on which the Soviet embassy was located was re-named ‘Anti-Revisionism Road’ – chiming with the Chinese accusation that the Soviet Union had strayed from the straight path towards communism – and the British embassy’s address was forcibly changed to ‘Anti-Imperialism Road’.

During the Vietnam war, the street in Calcutta housing the U.S. Consulate General was renamed Ho Chi Minh Street, and that still is its official address.

After the execution by the U.S. of Julius and Ethel Rosenberg in June 1953 for espionage for the Soviet Union, the Hungarian government gave Hold Utca ('Moon Street'), location of the U.S. embassy, the name of Rosenberg Házaspár Utca ('Rosenberg Couple Street'). The street name was changed back only after the fall of communism.

Another, more recent and slightly milder example of an address change by way of diplomatic smoke signal occurred in Chad late last year, when the street on which the U.S. embassy is located was renamed Rue d’Istanbul, in honour of a visit by Turkish president Erdogan.

A much more widespread, but unofficial exercise in renaming went on in Paris on 2 November 2015, when the streets of a dozen embassies were renamed by Reporters Without Borders after journalists who had been killed or jailed in the course of performing their duties in those countries.

Not all embassy street renamings are as grim and/or undiplomatic as the examples cited above. Sometimes, they are the exact opposite.

In honour of the long-standing ties with both nations, Thailand renamed the Bangkok street on which the Austrian embassy is located ‘Wolfgang Amadeus Mozart Street’, and the French embassy ‘Rue de Brest’.

In Armenia, the Indian embassy is on India Street and the U.S. one on American Avenue. Egypt changed the name of the street where the Sri Lankan embassy is located to Sri Lanka Street. In Belize, the Taiwanese diplomatic mission is on Taiwan Street.

It’ll be a while yet before the Russian embassy in Kiev gets a sympathetic address like that. The Ukrainian government protests Russia’s annexation of the Crimea as illegal, and maintains that the rebels in its eastern regions get covert support by the Russian army.

In September 2015, Kiev mayor Vitaliy Klitschko renamed the street on which the Russian Consulate stands ‘Volunteer Battalions Street’, after military units which the Russians claim include neo-nazi groups such as the Azov Battalion and the Right Sector.

It was the same Klitschko who promised Boris Nemtsov’s daughter that he would rename the street on which the Russian embassy is located after her murdered father. It seems that that promise has had to travel to Washington to be fulfilled, as the Russian embassy to Ukraine is still located at Povitroflotskyi Prospekt (‘Air Fleet Avenue’).

Image of the Russian embassy in DC taken here from Radio Free Europe/Radio Liberty. Images of the unofficial Parisian street signs and stills of their installation at the embassies taken from this YouTube video by Reporters sans frontières. Image of the Babisandz street sign here at RTE. Other images from Google Maps. Many thanks to Samuel Albert for sending in the Hungarian example.