As of this writing, Earth is a few million people short of the 7.5-billion mark. Considering that we add about 200,000 people to the planet every day, you may be reading this as the World Population Clock passes that symbolic milestone. Or, more likely, with that figure already firmly in the rear-view mirror.

World Population is old-school Big Data: in that category of figures too big to comprehend, like the size of the universe or of U.S. federal debt. But there are a few ways to translate population data into an easily graspable visual. Some of which have figured on this blog before.

This map is a variant of the longitudinal map. It divides the east-west distribution of humanity into ten slices of equal population. Each one is home to 750 million people – a bit less or a lot more, depending on when you are reading this.

The result is remarkable, not just because it manages to give a population schematic the look and feel of a time zone map, but also because it merges the north, with its mature economies and ageing populations, to the south, where population growth tends to cancel out a large part of overall GDP growth, leaving per-capita GDP stagnant and the locals poor. That also turns it into a road map of sorts for the migratory pressures that are currently animating public debate around the world. 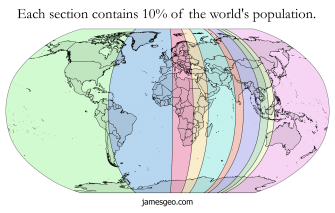 (1) To be precise: the most densely populated large island in the world. Java has a density of 1,026 inhabitants per km2. The most densely populated island in the world is Santa Cruz del Islote, a tiny islet in Colombia’s San Bernardo archipelago. It has an area of only 0.12 km2 but a population of around 1,250. Which gives a density of well over 10,300 inhabitants per km2 (or about 27,000/sq mi). 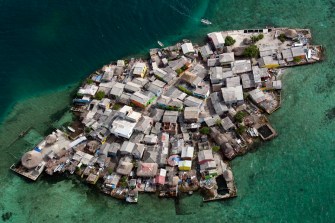 Uncertainty is inherent to our Universe.
Up Next
Starts With A Bang

Theoretical calculations predict an event horizon to all black holes, obscuring the central region in accordance with General Relativity. This is a prediction that has never been tested observationally. Image […]