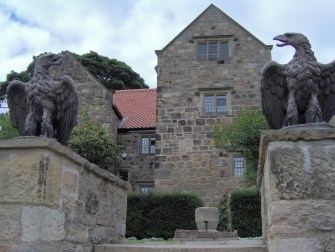 Giving a location a name is a possessive act. It transforms an ‘anywhere’, a random space, into a ‘somewhere’, a certain place. A place with meaning, not just for the name-givers, also for later generations. Because place names are sticky. They can survive for hundreds, sometimes thousands of years. And even if today’s toponym, worn with use, sounds different and lost its original meaning, it still remains a ‘vector of trans-generational communication’.

In isolation, each toponym is like an archaeological dig – hiding multiple layers beneath a well-trodden exterior. In context, surprising toponymical patterns emerge. As in these maps by Helen McKenzie. She’s disassembled British place names to examine the frequency of some of their most common constituents. They reveal deep history hiding in plain sight, on countless road signs across the UK. The toponymic suffix -by is most prevalent in the area around the Humber.Image: Helen McKenzie, reproduced with kind permission

Take -by (or -bie). It’s one of the most common suffixes in place names throughout England, but also Scotland and Wales. Familiar examples include Grimsby and Whitby, on the North Sea coast; Derby inland, Formby on the Irish Sea coast and Lockerbie in Scotland.

There are hundreds of other examples, and they are among the most lasting relics of Scandinavian influence in Britain. By in Old Norse signified a farmstead or village. In modern Scandinavian languages, a ‘by’ still means village or city. In English, the word has also given rise to the terms ‘by-election’ and ‘by-laws’ – although pronounced differently than the suffix.

As the map shows, the suffix is most prevalent in the area around the Humber, and northern England in general. This is the core of what was once known as the Danelaw, a large swathe of northern and eastern England that was under Danish rule for about 80 years, until the expulsion of Eric Bloodaxe (*) from Northumbria in the year 954.

But ‘by’ also occurs in Wales, as far south as Cornwall and as high north as central Scotland – a testament to the scale of Scandinavian involvement in Britain. 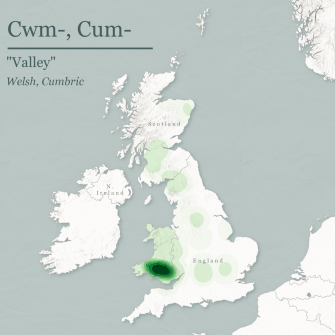 The anglicised version is ‘coombe’, which gives an indication of how to pronounce what looks like three consonants in a row. As the Welsh word for ‘valley’, it stands to reason that this toponym is most prevalent in the valley-rich south of Wales. Examples include Cwmbran, Cwmafan and Cwmfelinfach.

As for the comparative antiquity of British languages, Welsh is the much older rival of English. The post-Roman, pre-English inhabitants of Britain spoke a Celtic antecedent of Welsh. They were pushed west by the invading Anglo-Saxons. A telling – but disputed – piece of toponymic evidence is the Welsh word for England, Lloegr, which some say means ‘lost lands’.

Better evidence are the many Celtic-influenced place names throughout England, including such well-known toponyms as Dover or Manchester. Focusing on Cwm and its anglicised variant, we find pockets throughout southern, central and northern England, as well as in Scotland. 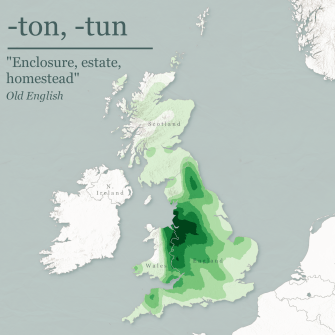 The area of central England around Merseyside has the heaviest concentration of -tons and -tuns in Britain. Image: Helen McKenzie, reproduced with kind permission

‘Tun’ is an old English word for enclosure that is cognate with Dutch ‘tuin’ (‘garden’) and German ‘Zaun’ (‘fence’) – for more on that, see #615 – and by way of ‘ton’ gave rise to ‘town’. Perhaps the world’s most famous example is Washington: the U.S. capital’s name derives from the country’s first president, whose name comes from the eponymous town in northern England. Its name, in turn, probably originated as Hwæsingatūn, the estate (tūn) of the descendants (inga) of Hwæsa – an old English first name that means “wheat sheaf”.

The Anglo-Saxons planted countless tuns/tons throughout England, with the second-highest concentration in the northeast, around Washington. The highest concentration, though, is centered on the part of central England towards Merseyside (Liverpool and environs), with Bolton, Everton, Preston and Warrington some of the best known examples.

But really, there are tuns and tons all over Britain, with distant areas of Scotland and Wales the only exceptions. Note the concentration in southwest Wales: southern Pembrokeshire, once known as Little-England-beyond-Wales.

Maps reproduced with kind permission of Helen McKenzie. For a few more maps on toponymy and a lot more on other subjects (including emploment density in Hackney and otter sightings in the UK), check out Ms McKenzie’s Instagram, at helen.makes.maps.

(*) Update 1/4/21: Eric Bloodaxe was not Danish; in fact, he was the second king of Norway. (many thanks to Erlend Hov for pointing out the distinction). However, Anglo-Saxon sources often didn’t make that distinction, calling all northmen ‘Danes’.

Tags
geographyhistoryidentitylanguagemapnamesunited kingdom
In this article
geographyhistoryidentitylanguagemapnamesunited kingdom
Related
Hard Science
200 years of exploring Antarctica
What we’ve learning from the world’s coldest, most forbidding, and most peaceful continent.
High Culture
The most controversial painting in Russian history
Created in the 1880s, “Ivan the Terrible and His Son Ivan,” which depicts a father murdering his son, divides Russians to this day.
The Past
Ceramics, corn cobs, and other strange things we used before toilet paper
Some objects were softer than others.
Neuropsych
The trouble with medicating mental illness
Has the “age of psychopharmacology” shrunk society’s sense of responsibility for mental health?
Strange Maps
The great European house cat migration
Ancient bones reveal that domesticated felines were at home in Pre-Neolithic Poland around 8,000 years ago.
Up Next
Health
Predicting PTSD symptoms becomes possible with a new test
An algorithm may allow doctors to assess PTSD candidates for early intervention after traumatic ER visits.