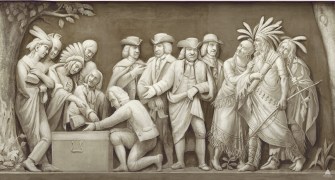 Quaker pioneer William Penn (center) treating with the Delaware Indians for the purchase of what was to become Pennsylvania.Image: Frieze by Constantino Brumidi (1865) in the Rotunda of the U.S. Capitol; via Architect of the Capitol – Public Domain.

How many Americans are of British descent? It’s a surprisingly difficult question to answer. Is that because, in an age of hyphenated identities, the founding one is still the default? Or has that identity become so amalgamated that it is now irrelevant? Perhaps the correct answer is: a bit of both.

The precipitous drop in self-reported British antecedents corresponds in part with the rise of those who identify as (unhyphenated) ‘American’, up from 12.4 million (5 percent) in the 1990 Census to 20.2 million in 2000 (7 percent) – the largest growth of any ethnic group in the 1990s.

However, back around the year 1700, about 80 percent of the population of what was to become the United States were of English (or Welsh) descent, with about 11 percent of African origin, and the rest being Dutch (4 percent), Scottish (3 percent) and other European. The imprint of the British on early American society was overwhelming, diverse and long-lasting: the regional and cultural differences between the settler groups created distinct regional and cultural identities in America.

That’s the argument made by David Fischer, a history professor who in 1989 published a 900-page treatise on early migration to North America called “Albion’s Seed.” He identified four British ‘folkways’ that came over to the other side of the Atlantic in the 17th and 18th centuries (see map), each with their own ideas about the liberty they wanted to find there. 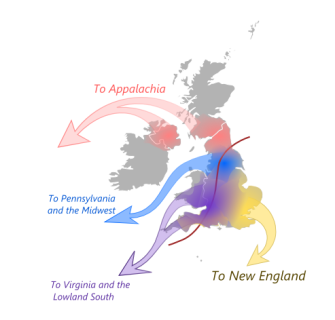 These religious fundamentalists are the ones who came over on the Mayflower and gave America Thanksgiving and the self-image of being a ‘City on a Hill’. Puritan society was gloomy and repressive: ‘exceeding the bounds of moderation’ was a punishable offense, and even just ‘wasting time’ got you into trouble.

The other side of the coin: life was very well-ordered. There was little income inequality and crime rates were low. Not only was charity towards poor the rule, being uncharitable was, yes, a punishable offense. Domestic abuse was punished severely. Women had a relatively high degree of equality. And government operated via town assemblies in which all could have a say.

The Cavaliers came from the losing side of the Civil War in England, which was now led by the Puritan-inspired Oliver Cromwell. Royalist, Anglican, and aristocratic, they brought along with them their indentured servants – more than 75 percent of the total migration – hoping to recreate in Virginia and environs the socially stratified agrarian society they had left behind.

When their servants began dying en masse, they started importing African slaves, laying the groundwork for the race-based slavery system that underpinned the economy of the South until the end of the Civil War.

Halfway between the fun-hating Puritans and the pleb-hating Cavaliers, the Quakers seem modern and likeable. Believing everybody intrinsically good, they practiced tolerance, pacifism, gender equality, and racial harmony. They opposed slavery, the death penalty, and cruelty to animals and children.

Quakers replaced a wide range of social acknowledgements according to rank (bows, nods, grovels) by a single, neutral equivalent: the handshake. Quakerism was perhaps one of the first Christian denominations to become indistinguishable from liberal, secular modernity. On the other hand, they were even more prudish than the Puritans. Doctors had a hard time treating Quakers because they described everything from their necks to their waists as their ‘stomachs’, and everything below as their ‘ankles’.

Inhabiting the border regions between Scotland and England, and between protestant settlers and catholic natives in Ireland, the Borderers were used to violence and lawlessness, and to lives that were nasty, brutish and short.

It is no coincidence that they ended up in Appalachia, at that time itself a violent border region. It was the kind of world they knew. Borderers were wary of government, prone to violent family feuds, and not bothered by traditional morality. By one estimate, in the year 1767, 94 percent of all ‘backcountry’ brides were pregnant on their wedding day. These Borderers were not much beloved by other settler groups in America. One Pennsylvanian writer called them “the scum of two nations”. But the Borderers also contributed vigorously to the success of both the American Revolution and America’s westward expansion. 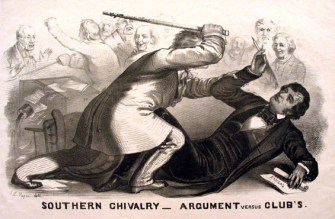 It’s tempting, and perhaps not entirely unjustified, to see in these four strains of British ‘folkways’ the antecedents of some of America’s current cultural divides. One might for example see Puritans and Quakers as constituting elements of the ‘blue’ tribe, while Borderers and Cavaliers could be considered the ancestors of the ‘red’ tribe.

But thinking of America as a “death match between Puritan-Quaker culture and Cavalier-Borderer culture”, as one commentator put it, is perhaps a bit too easy. There may be plenty of overlap within either pair, there is also much to distinguish each from the other. And then there are other and subsequent migrations contributing to and complicating the picture.

Nevertheless, a bit of cultural archaeology can be illuminating, if only to see where the bodies are buried.

Update 30 September: image reference for the map was changed to reflect the original source and producer of the map in question.

Feeling unproductive after working all day? It may be “productivity dysmorphia”

Unlike other world rulers, Genghis Khan was laid to rest not inside an elaborate mausoleum but an unmarked grave somewhere in Mongolia. Maybe.
Up Next
The Present