By 2020, Bitcoin mining will consume more energy than the world currently produces 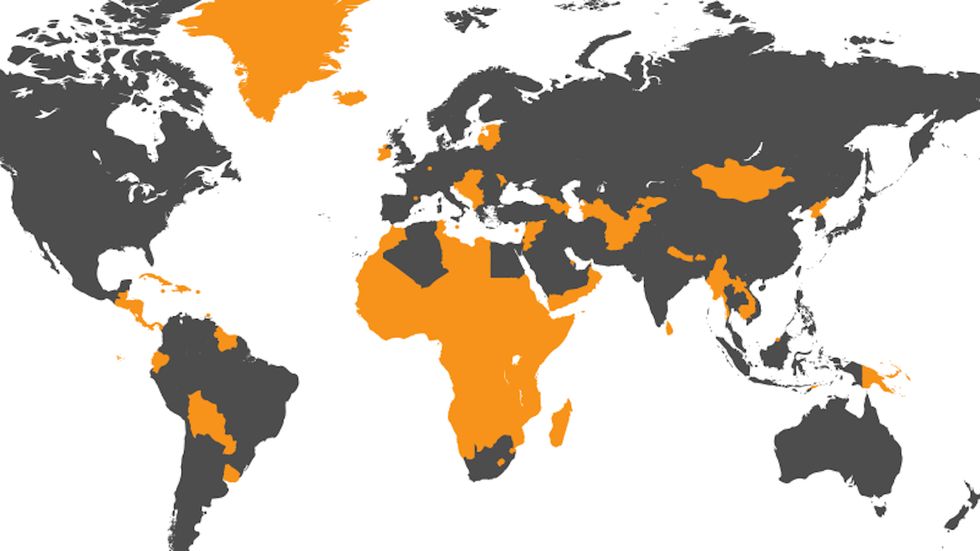 This map doesn't deal with the phenomenal rise in value of Bitcoin, nor the cryptocurrency's coming crash, which some financial experts say is as inevitable as that of any pyramid scheme. But it does provide another angle on the digital currency, which has shot up in value from $1,000 to more than $10,000 within this year.

The growth of Bitcoin has also led to an exponential increase in 'Bitcoin mining': the computer processing power required to keep the blockchain – the decentralised, encrypted records upon which the value of Bitcoin depends – consistent and unaltered.

According to the Bitcoin Energy Consumption Index (BECI) maintained by Digiconomist, every individual Bitcoin transaction eats up 275 kWh of electricity, and the latest estimate of Bitcoin's total annual energy consumption is in the vicinity of 29.05 TWh (1).

As the map shows, Bitcoin consumes more energy on an annual basis than all but three of the 54 countries in Africa. Only Algeria, Egypt and South Africa out-consume the virtual currency. But not otherwise large and important countries like Nigeria, DR Congo or Kenya.

In the Americas, all Caribbean nations (includeing Cuba) use less electricity than Bitcoin, as do Suriname and Guyana, Uruguay and Paraguay, Bolivia and Ecuador, and each of the six Central American nations (Panama, Costa Rica, Nicaragua, El Salvador, Honduras and Guatemala).

The U.S. is the world's #1 electricity-consuming nation, and Bitcoin uses only 0.74% of the electricity America needs in a year. But quite a few states fall below the Bitcoin threshold: Maine, Vermont, New Hampshire and Rhode Island in the northeast; Delaware and DC in the Mid-Atlantic region; Wyoming, Montana, Idaho and the Dakotas in the Plains, and New Mexico in the southwest. And Alaska and Hawaii.

Alaska is the state with the lowest energy consumption in the U.S. Annual Bitcoin mining equals 472% of Alaska's annual electricity needs.

BECI estimates that Bitcoin mining costs about $1.5 billion annually – but only if we assume that the mining occurs where electricity is cheap (some areas of China, for example). At average U.S. electricity prices, the cost would be just over $3 billion. However, with estimated annual revenues of Bitcoin mining currently at $7.2 billion, it remains a very profitable endeavour.

Maps found here at Powercompare.co.uk. Many thanks to Jeremy Hoogmartens and Tom Kittmann.

(1) A watt-hour (Wh) is a unit of energy equal to one watt of power sustained for one hour. A kilowatt-hour (kWh) is a thousand of those units. It can power a 100-watt lightbulb for 10 hours, or a 250-watt flatscreen TV for 4 hours. And a terawatt-hour (TWh) is a billion kilowatt-hours, which is the energy equivalent of 590,000 barrels of oil.