This world map is not a prediction of the catastrophic effects of rising sea levels in some distant future. It is a map of the here and now, albeit using a fanciful parameter. The fifty-something countries on this map have outlawed corporal punishment of children. In almost three times as many countries, at least some form of violence against children remains legal. And thus they remain submerged below the waves of this Barnens Världskarta – Swedish for Children’s World Map.

The map is produced by the Swedish organisation Rädda Barnen (Save the Children), which updates the map each time another country emerges from the Ocean of Child Abuse. In 1979, Sweden itself was the first country in the world to outlaw corporal punishment of children at home – thus becoming the first, lonely island in the world ocean.

By now, a few archipelagos have emerged, notably in Europe and South America. “We are working for there to be more countries”, says the organisation’s website, which mentions U.N. research that shows that 80% of the world’s children are subjected to corporal punishment at home. 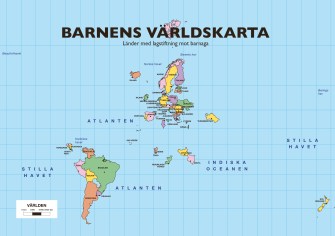 “Parental freedom should not take precedence over children’s rights”, says the organisation. According to this stunning map, most countries still disagree – among which the entirety of North America, and most of Africa, Asia and Oceania. Even in Europe and South America, there are still some gaping absences: France and the UK in the former case, and Chile and Colombia in the latter.

The world map above dates from last year; since then, Rädda Barnan has updated the map, which is now an interactive globe, with each country shown now clickable for more information. Fortunately, a few more countries have joined the dry land: Paraguay, Lithuania and Mongolia (see below). Over time, thanks in part to the groups continuous lobbying, other countries are likely to follow suit. How long will it take for this children’s world map to resemble a normal one?

The Anthropocene: We’ve Begun a New Era, and It’s Not Looking Good

A group of expert geologists declared that a new epoch influenced by human impact has begun.