669 - Digital Monkeys and Virtual Ducks: What to Call the @ 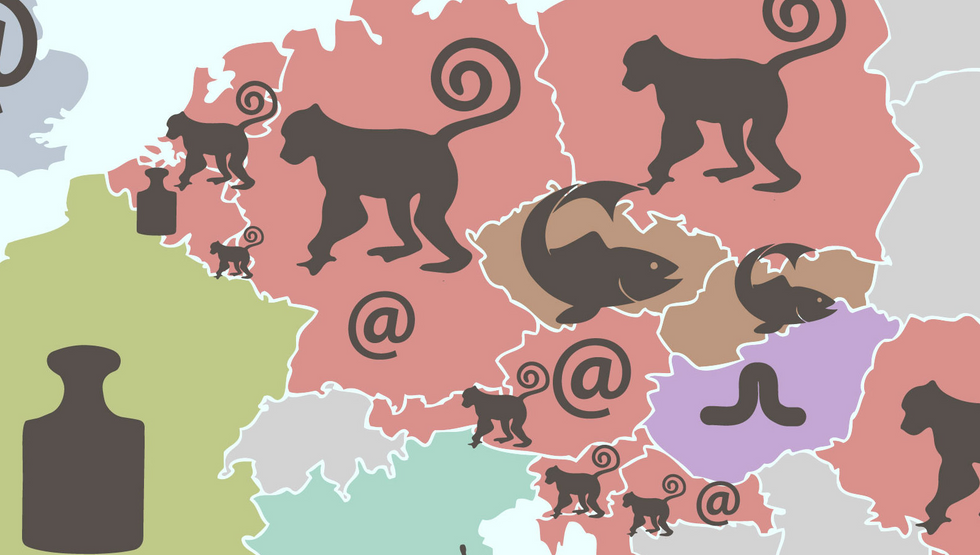 The emergence of email catapulted the @ from typographical obscurity onto everybody's keyboard. Now the thing had to have a name fit for the digital age.

Despite an early proliferation of alternatives (including each, vortex, whorl, cyclone, rose, cabbage and commercial at), English settled on at sign, or simply at. A nomenclature that gets top marks for brevity if not wit, and is becoming common in other languages as well now.

Which is a bit of a shame, as other European languages had a bit more fun with the curly letter. As this map shows, the @ is called by many different names across the 28 member states of the EU – mainly animals. The map also locates curious clusters in which these animals congregate, as if certain climates are more favourable to certain imaginary creatures than to others. Electronic elephants seem to thrive only in Scandinavia, for example.

The Romance languages by and large stuck to the inanimate arroba, the pre-digital name for the @ sign in Spanish and Portuguese. That name is derived from the Arabic ar-rub, meaning a quarter – in this case, a measure of weight: 25% of what a donkey (or mule) could carry. In Spain, the customary weight of an arroba was 25 pounds (11.5 kg), in Portugal, 32 pounds (14.7 kg). On the map, we see these weights proliferate throughout the Iberian peninsula, but also in France and French-speaking Belgium (as arobase).

Continental Europe is otherwise dominated by digital monkeys, due to the likeness of the @ to a monkey tail curling around a tree branch. In Germany and Austria, the symbol is referred to as Klammeraffe. The word translates as 'spider monkey' – an American genus of monkey noted for its long tail. Klammer on its own can mean 'bracket', 'staple' or 'paperclip'. The Klammeraffe shares Germany and Austria with the ordinary at. But in Poland, the małpa ('monkey') has the country to itself.

Dutch speakers in the Netherlands and Belgium refer to the @ as apenstaart(je), '(little) monkey tail'. In Luxembourgish, that becomes Afeschwanz.

The simian simile also proliferates throughout the Balkans: in Romanian, the @ is called coadă de maimuţă ('monkey tail'), in Bulgarian маймунка (maimunka – 'little monkey'). Croatians either use at or manki, a direct loan from the English 'monkey' (rather than the Croatian word for monkey, majmun). Their Slovenian neighbours call it an afna ('little monkey').

In Scandinavia, the elephant was seen as an apt metaphor for the curly a. In both Danish and Swedish, the @ is called snabel-a, with snabel meaning '[elephant's] trunk'. Their Finnish neighbours offically call it at-merkki, but colloquially either kissanhäntä ('cat's tail') or miukumauku ('meow-meow').

Czechs and Slovaks are united in their fishy metaphor for the @, finding in its curly appearance a similarity to zavináč, or 'rollmops' (rolled pickled herring fillets).

Italy, in a weird echo of post #599, is dominated by a chiocciola ('snail') riding up its boot. In Greece and Cyprus, the @ is rather enigmatically compared to a παπάκι (papaki – 'duckling').

The Baltics follow the English fashion, and say at. Not very imaginative perhaps, but less impalatable than the Hungarians, who say kukac, or 'maggot'.

That concludes all the fauna on this delightfully weird map, but here are some other remarkable names for @ in other languages:

Many thanks to János Vargha for sending in this map, found on this page of Europapont, a Hungarian-language online meeting place dedicated to European culture.