Ah, if only Napoleon had never met his Waterloo, surely the world wouldn’t look like this! This being a map of foreign news as shown on France’s 6 terrestrial channels [1] in 2013. While neighbours of France and countries plagued by the wars and miseries du jour closely orbit the centre of attention, that centre itself is self-assuredly occupied by the United States, the grand méchant loup[2] of France’s ongoing battle for global cultural relevance. In a country so keen to resist the onslaught of the ‘Anglo-Saxons’, why does America feature so prominently on the nightly news?

This map is a snapshot for last year of a longer overview (2009-2013) of foreign news items on TF1, France 2, France 3, Canal+, Arte and M6, compiled by France’s Institut National Audiovisuel (INA). Over that five-year period, the US was mentioned in 10,175 news items – about 2.5 times as much as runners-up Germany (4,205 mentions) and – adding to all things Anglo -the United Kingdom (4,061). Apart from the US, the overall Top Five was composed entirely of France’s neighbours: not just Germany and the UK, but also Italy and Spain.

Over the entire five-year period, China and Russia – two of the very few credible claimants to world power status apart from America – were mentioned almost 5 times less than the US (1,867 and 1,951, respectively) and figure in the Top Ten only three times each.

Although there is much jockeying for position in the rest of the Top Ten, the #1 spot for each of the five years is taken up by the United States. The world may no longer be as unipolar as it seemed just after the fall of Communism at the start of the 1990s, but from a news point of view, America still rules the airwaves – at least in France. 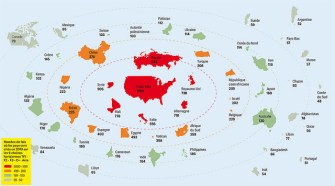 In the second (orange) news layer, the tiny Vatican (398) seems an unlikely high-flyer – but of course, 2013 was the year of the first papal resignation in centuries, and the election of Pope Francis.

Observing which countries are closest to the news centre, one continent does seem to exert a special attraction on French news desks – Africa. This is partly due to the fact la Francophonie covers a large swathe of the continent. But the interest is much more than merely cultural and/or historical. France maintains a much closer interest in its former colonies than most other Western nations, its army regularly putting boots on the ground in the region.

So French news about Africa is often about military conflicts. Or as they call them in France: actualités anxiogènes – angst-inducing news.

With the exception of South Africa, where the death and funeral of Nelson Mandela contributed 275 news stories to a total of 359 in 2013, all African countries with over 50 mentions were in the throes of civil or military unrest, such as Mali, Egypt (493), Nigeria (223) and the Central African Republic (205). Much of the attention was focused on French military interventions in Mali (generating no less than 651 stories) and the CAR (163); the presence of French hostages in Niger (upping the total to 170); or the terrorist attack on a natural gas plant at In Amenas in the former French colony of Algeria (98 out of a total of 133).

In spite of the ample portion of African news on French TV screens, the focus is quite uneven: 12 of the continent’s 52 countries are mentioned no more than twice [3], and 7 are not mentioned at all [4]. No more than 10 countries represent 91% of all occurrences.

This reflects not only the France-focused bias of the selected news items, but also the brutal arithmetic practised by news editors anywhere: the more it bleeds, the higher it leads; if it’s good news, it’s no news. So perhaps the fact that so many African countries managed to stay out of the spotlights of the evening news is not entirely a bad thing…

That same consideration can be extrapolated to the rest of the world. Out of the 197 states recognised by the UN, 46 weren’t mentioned even once on French TV news in 2013; of the other 151, 58 were mentioned less than 10 times, and 34 more than 100 times.

Most of the attention was hogged by the United States. To the casual observer of American news programmes, it may sometimes appear as if the rest of the world doesn’t exist. Stretching the truth a little bit further, it may seem that for their French counterparts, only America exists.

Of the total of 1,790 ‘American’ news items on French TV news in 2013, no less than 124 were dedicated to Edward Snowden, 149 to the Boston Marathon bombing, and 107 to extreme climate events. Which means that American weather received more attention in France than the situation in the Palestine (103), and more than double as much as news from Iraq (54).

Why? One big chunk of the answer: cutbacks. As TV budgets shrink, news has to be made on the cheap. And it costs less to copy-paste items on extreme weather events in the US than to have reporters file stories from Palestine or Iraq. America, home of the 24-hour news cycle, produces much more news stories (albeit most about itself) than any other country on the planet.

A turning point for foreign reporting on French TV came in 2009, when then-president Sarkozy reduced the revenue base of France 2 and France 3 [5] by banning commercials after 8pm. That prompted France 2 to shorten its evening news broadcast – a decision quickly emulated by its main private competitor, TF1.

Because foreign reporting is so expensive to produce, it has borne the brunt of the cutbacks. While France 2 retains only 10 foreign bureaus, TF1 has reduced its presence abroad to a mere three. In 2009, there were already 32% less foreign news items on the 6 main channels than in 2008. Even Arte, a Franco-German station which by its multinational nature has a broader outlook on the world, had 20% less foreign reporting by 2010.

Which produces a paradox: in a world increasingly interlinked by migration, trade, conflict and global issues like climate change, foreign news – in France, but elsewhere as well – is becoming rarer, less diverse and more trivial. In 2013, French TV dedicated almost three times as much attention to the birth of Britain’s prince George than to the death of its former Prime Minister Margaret Thatcher (93 vs. 37).

Meanwhile, as foreign news is reduced to a uniform and tiny carroussel of violence and trivia, large parts of the world are becoming news deserts. In 2011, 732 items on French TV were dedicated to Germany. Only 15 to Finland. And none to Latvia. That is not just a reflection of the population differences between these countries, but an amplification.

But how would a foreign news crew – French or otherwise – recognise a story from Latvia? Exactly: if the explosion was big enough…

Many thanks to Gabriel Simunek for sending in this map, found here on Telerama.fr. Download the entire INA report (#33) here on the INA website.

[1] Terrestrial television (or over-the-air television) refers to transmission via radio signals, using antennas for reception. Although it is the first and until a few decades ago the only method of TV broadcasting, it has now been surpassed by cable television (the term ‘terrestrial’ came into use in the 1960s, when cable started using satellite signals). Only about 10% of households in the US still use the terrestrial signal. The French term télévision hertzienne refers to the unit of frequency (Hertz) for the electromagnetic waves used to transmit the TV signal.↩

[2] A.k.a. the Big Bad Wolf. For the sake of completeness: Little Red Riding Hood is le Petit Chaperon rouge in French – perhaps the most appropriate language for this fairy tale, as it is known from the Tales of Mother Goose, collected by the Frenchman Charles Perrault (1697). ↩

For the first time in nearly 1500 years, fewer than half the people in England and Wales consider themselves Christian.
Up Next
Surprising Science

On the Anniversary of World War I, Let’s All Make Fun of Conspiracy Theories

The run up to the war is perhaps the most glaring evidence we have of how human stupidity is the dominant theme, or a least a very powerful one, working to drive our history forward.