Remember Syria? It’s the war everyone was talking about before the one about to erupt over Crimea invaded our screens. Turkey hasn’t forgotten, though. Syria’s northern neighbour has seen a burdensome spillover, in refugees and violence, from the civil war raging on its southern flank.

But crises are also opportunities, and the Syrian conflict might be Ankara’s chance to reassert its influence in a region that was part of the Ottoman Empire less than a century ago. Perhaps now is a better time than ever, with the rest of the world fixated on Russia’s land grab in Ukraine (or looking for a missing passenger jet).

Syrian refugees in Turkey number well over half a million. They are a powerful, if latent incentive for Turkey to restore order in at least some part of Syria. Actual use of force would require a more active provocation by Syria’s warring parties. Although there have been some cross-border incidents over time, neither the Assad regime’s forces nor the various rebel factions seem prepared to take the fight into Turkey. 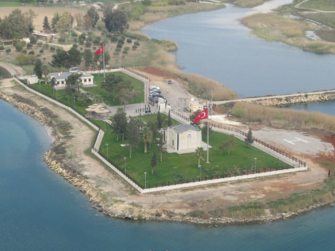 But Ankara has a geopolitical mousetrap on a wire, hidden deep inside Syrian territory, courtesy of a Turkish headman who’s been dead for the better part of a millennium. Sulayman Shah (1178-1236) is buried in Syria, but his grave is in a plot of land that is forever Turkish – not just poetically, but in a very real, guaranteed-by-international-treaty kind of sense.

The Tomb of Sulayman Shah, on the left bank of the Euphrates in Aleppo Governorate, is Turkey’s only exclave, with full Turkish sovereignty. The compound flies the Turkish flag, and is guarded by a dozen Turkish soldiers. Outnumbered and outgunned by all of the local rebel groups, that symbolic guard of honour would be quickly defeated by any militia deciding to take over the Tomb. Which is why Turkish Foreign Minister Ahmet Davutoglu recently issued a stark warning to rebel fighters in the area: Turkey will retaliate ‘in kind’ to an attack on the Tomb of Sulayman Shah.

For, as far as Ankara is concerned, an attack on the Tomb is an attack on Turkey itself. “Turkey will take any measures to defend its homeland without any hesitation.Turkey has the right to take any kind of measures for its security and stability,” according to Davutoglu.

To which a high-ranking Turkish official, speaking on condition of anonymity, added: “We are prepared for any scenario, as always”. The portentous comments were made as clashes between rivalling rebel groups of the Free Syrian Army (FSA) and the Islamic State in Iraq and Syria (ISIS) near the Tomb continued to intensify, with ISIS seizing control of a nearby town.

Although small in area, Turkey’s only exclave, located about 25 miles south of the Turkish-Syrian border has a great symbolic significance for the Turks: Sulayman Shah was the grandfather of Osman, the founder of the Ottoman Empire. 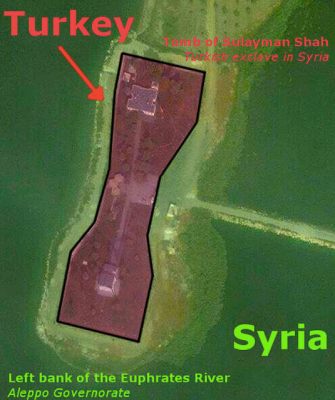 Geographical situation of the Turkish compound: on a Syrian peninsula sticking out into the Euphrates. (Image: Ruland Kolen)

But the monument’s actual link to Sulayman Shah is tenuous at best, mainly because so little about him is historically verifiable. This headman of the Kayı, a tribe of Oghuz Turks then living across Iran, Iraq and Syria, is remembered for two things: his famous progeny, and his untimely death. Sulayman Shah drowned in the Euphrates while fleeing a sudden advance of Genghis Khan’s Mongol armies.

The unfortunate headman reportedly met his watery end near Qal’at Ja’bar (in Turkish: Caber Kalesi), a hilltop castle overlooking the left bank of the river. Whether true or not, the folklore of later centuries associated the castle with the Shah, nicknaming it Mezar-i-Türk (Turkman’s Grave).

Much later, when Sulayman Shah’s Ottoman descendents ruled these parts, Sultan Abdülhamid II (r. 1876-1909) constructed a tomb at the castle to match the stories. Even after the Ottoman Empire fell and its successor state Turkey withdrew to the north, Suleyman Shah’s symbolic value assured that the tomb received special treatment. Atatürk, although a secularist moderniser, insisted that it remain in Turkish hands.

So, while the Treaty of Ankara (1921) handed control of Syria over to the French, Article 9 made an exception for Caber Kalesi, which was to remain a Turkish exclave – complete with the aforementioned honour guard for the Shah’s tomb. This territorial arrangement survived Syrian independence in 1946, but was threatened by the creation of Lake Assad.

In 1968, when construction started in 1968 on the Tabqa Dam, upstream from Caber Kalesi, it became clear that the river’s rising waters would greatly impact, and perhaps could swallow Turkey’s symbolic foothold in Syria. 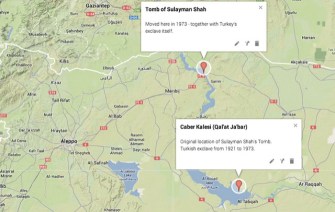 The Syrians and Turks worked out a unique solution. They agreed to move both the tomb and the exclave to another location on the riverbank, on the other side of the dam. To my knowledge, this is the only example ever of an exclave physically being moved to another location.

Caber Kalesi, Syrian since 1973, as it turns out has not been submerged by the rising tide of the Euphrates. But the former hillside fort has been transformed to an island, only accessible via an artifical causeway.

Turkey’s new exclave is located near the town of Karakozak, 50 miles north of Caber Kalesi (and thus much closer to the Turkish border). Itis roughly the same size as the previous one (just under 100,000 square feet). Also like the previous one, it sits on the left bank of the Euphrates.

Even today, the Tomb is still guarded by Turkish soldiers (although it is unclear how they make their way across the hostile territory north towards the Turkish ‘mainland’) and remains a bizarre geopolitical island in the raging sea of the Syrian civil war. You still need a passport to enter the compound.

Could a violation of the Tomb’s exceptional geopolitical situation become a casus belli for Turkey? It could play into the Neo-Ottoman tendencies of its current government, perhaps dreaming to restore some of its ancient authority over the region. Or at the very least, it could help deflect attention away from scandals and civil unrest at home…

Turkish minister’s threats first seen on this page of Friends of Syria. For a more in-depth treatment of the political background of this story (but without maps), see Dr. Erimtan Can’s article on rt.com.

Some scientists see religion as a threat to the scientific method that should be resisted. But faith “is really asking a different set of questions,” says Collins.
▸
5 min
—
with
Francis Collins
Up Next
Surprising Science

As Big Think reported yesterday, a “smoking gun” for the Big Bang Theory has been found. NASA today released an image of the exciting evidence that supports that the universe […]