“Turkish leader says protests will not stop plans for park,” read a New York Times headline Sunday. Meanwhile, throughout Istanbul, Ankara, and dozens of other cities across Turkey, Turkish citizens continue to pour into the streets for the fourth straight day in a massive, nationwide protest that is clearly about much more than a park. Gezi Park, a modest rectangle of trees and concrete off Istanbul’s main Taksim Square, was indeed the catalyst for what has become a widespread resistance movement against Prime Minister Tayyip Erdogan and his AKP (“Justice and Development Party”) government’s increasingly autocratic rule.

On Friday, protesters staged a peaceful sit-in in Gezi Park, protesting the government’s plans to demolish the park and erect a shopping mall in the shape of a historic Ottoman military barracks. The decision was deliberately symbolic – the latest signal of the government’s intentions to “restore” Turkey to an idealized Ottoman past – before Kemal Ataturk (“Papa Turk” would be a fair translation of his chosen last name) established the modern, officially secular Republic of Turkey in 1923, as the world reorganized itself after World War I and following a war of independence against allied Greek, British, French, and Italian powers. Since the AKP gained parliamentary majority in 2002, supporters of Ataturk’s vision have found themselves increasingly marginalized as Erdogan’s government has terrorized the media and the military into submission.

So when Turkish police attacked Friday’s peaceful demonstration with tear gas and water cannons, it was horrifyingly in character, and prompted a growing nationwide revolt.

See this moving account by a Turkish student of why these protests are happening – because approximately 50% of the nation is “sick of being afraid” of their nation’s leadership.

In 2008, on her last international trip ever to Turkey, my then-88-year old grandmother was struck by the frequent sight of Turkish grandmas in headscarves walking hand-in-hand with their granddaughters in tank tops and miniskirts. As a survivor of early 20th century pogroms in Poland, she was steadfastly opposed to orthodoxy in any form, and always delighted by signs of pluralism. This image of intergenerational tolerance nicely encapsulates the more-or-less forward-looking land of contrasts Turkey had become – a place where the Muslim call to prayer rang out daily over music shops pulsing with Western pop music. European and Asian, ancient and modern – Turkey as it was in 2007 seemed effortlessly to embrace a chaos of beautiful contradictions.

Supporters of the AKP (or “Justice and Development”) party, which has ruled Turkey for the past decade and is currently the subject of a widespread Turkish protest movement, will tell you that pre-AKP Turkey was an oppressive regime, shoving alcohol and sexuality in the faces of observant Muslims. Like France, the modern nation of Turkey was fiercely protective of its official secularism and European veneer. Headscarves were banned at universities and in government offices. On three occasions, when various political movements threatened to shift the nation away from Ataturk’s original vision (and not always in the direction of Islamism) the Army (guardians of the cult of Ataturk) staged military coups and took over the country.

Because of this fierce (even “orthodox”) commitment to modernity, its geographical position as a “gateway to the Middle East”, and it unique status as a 98% Muslim county with a more or less open culture, Turkey has played a unique strategic role in its part of the world, and been an important buffer for the tensions that always threaten to tear the region, and even the world, apart. Turkey is a member of Nato and an ally of the United States and Israel. As such, it has fallen under criticism at times from neighboring Muslim countries, but has arguably been pivotal in stemming the complete polarization of Middle East and West.

Turkey’s modern culture has gradually but systematically changed under Erdogan’s AKP. Headscarves are now a fashion statement for a growing number of young Turks. Given that AKP has deep ties to powerful businesses throughout Turkey, the headscarf is also a professional calling card – a sign of allegiance to to the winning team. Artists have been jailed for “anti-Islamic” statements. A law banning the sale of lipstick nearly passed. Several weeks ago, a law was passed banning the sale of alcohol after 10pm. Another law bans the sale of alcohol in any place that “can be seen by the public.” Those who oppose these changes are increasingly frightened and angry at what they see as an attack on their way of life – a marginalization of Turkishness as they know it. What rankles even more is the fact that the anti-AKP left has been unable to mount a convincing political opposition to the AKP, under whose government Turkey has enjoyed unprecedented economic prosperity. These protests are the culmination of a decade of pent-up rage and frustration.

Turkish protestors were rightly outraged by an almost complete media blackout on Friday and Saturday. An image circulating widely on social media shows CNN Turk and CNN International side by side at the height of the clashes between protestors and police. It speaks for itself, I think. 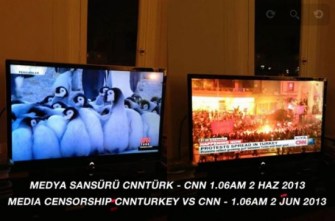 While the exact number is unknown, more journalists are currently jailed in Turkey than in any other country in the world, according to the 2013 World Press Freedom Index by Reporters Without Borders. This has been a systematic and deliberate silencing of dissent on the part of Erdogan’s government. And Erdogan is anything but apologetic. As protests spread on Sunday, he held a press conference at which he blamed Twitter for the unrest.

At this writing, clashes continue throughout Turkey. After a police pullback late Friday, the tear gas and water cannon attacks have resumed with a vengeance. In spite of this, protestors for the most part have been remarkably civilized, often organizing litter clean-up after demonstrations. At the same time, images over social media have shown cars burning and other signs of possible vandalism by protestors. It is hard to tell exactly what’s going on, or where this is headed, but one thing is for certain – half of the population of Turkey is fed up with Erdogan’s increasingly autocratic rule.

In a show of solidarity with the Turkish protestors, the hacking collective Anonymous released the following video. Then, making good on their threats, they shut down Turkish government websites. While vigilantism is no way to run a country, neither is attacking your own people with tear gas. As a supporter of these protests and of resistance to the Erdogan government, I have to admit I was honestly thrilled at the news.

Without a solid understanding of the factors that affect the transfer of learning, the gulf between training and job performance is difficult to bridge.
Up Next
Surprising Science

As skill sets become increasingly more complex in the modern workplace, employers are working harder to guarantee the health of their employees further into the future to save on training costs.