The afterlife, in the words of Tennyson [1], is “that untravell’d world whose margin fades / For ever and forever when I move”.

Death is the ultimate one-way trip, its final destination by definition unknowable to mortals like us [2]. Perhaps that’s why the topography of the Great Beyond is such an appealing subject. Whether it be the mythical river Styx, the gloried halls of Valhalla or the luscious gardens of Firdaus [3], many cultures are imprinted with a fairly precise map of the afterlife.

These imagined topographies are either prescient illuminations of the world to come, or mere comfort blankets for when the lights go out for the last time, – but that remains to be verified only when we ourselves will be crossing the bar [4].

This map has a different angle on death, and considering the aforementioned ubiquity of the maps of heaven and hell [5], a rather unique one: it is a map of mortality rather than of death. It charts  the most prevalent ways of shuffling off this mortal coil for each of the world’s continents, by providing a microscopic-level view of the human tissue most associated with any of the particular causes of death.

North America is represented by adipose tissue [6], in reference to its obesity epidemic. More than 1 in 3 Americans is obese [7]. Obesity contributes to the mortality of a variety of serious diseases, like diabetes, heart disease, stroke, and certain cancers. In all, obesity causes about 200,000 preventable deaths a year in the U.S., a number that is set to increase in the years to come. 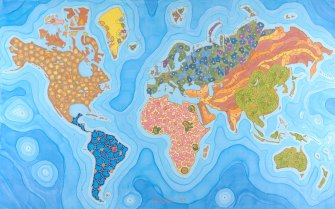 Europe deep into Russia is rendered as a slice of brain tissue, representing the neurodegenerative diseases [8] affecting the continent’s rapidly ageing population. Due to a marked decrease of fertility and a steady rise in life expectancy, the median age in Europe is predicted to increase from 37.7 years in 2003 to 52.3 years in 2050, with dramatic implications for the continent’s demography, economy and health.

The Pacific and East Asia are shown as pancreatic acinar tissue, which is linked to diabetes [9]. The disease, which often goes undiagnosed, can lead to heart and kidney failure, vision loss and amputations of the lower limbs – and ultimately, death. Diabetes is increasing sharply in the developing nations of East Asia. Researchers found up to 12% of Vietnamese suffered from type 2 diabetes, but did not know it, on top of the 4% diagnosed with the disease. Similar levels of diabetes could be prevalent throughout the rest of East Asia.

Africa, the only continent where infections are the leading cause of death, is made of blood. The red blood cells represent the risk of transmittable diseases like malaria and HIV [10].

South America and a part of Central America are shown as pulmonary tissue, as lung cancer and respiratory infections, caused in no small part by smoking, are a leading cause of death.

The Middle East and a large part of Central Asia are coloured in as cardiac tissue, as these areas are suffering from a large incidence of hypertension and other causes of heart failure.

Greenland is marked by a few sperm cells that represent infertility.

This map was made by Odra Noel, who is both a doctor and a painter, and produces art that focuses on the beauty of science: “When seen through the microscope, the tissues that form our organs and body parts can be stunningly beautiful, with all the complex structures that determine and enable their function forming beguiling, literally organic, patterns”, she says, adding: “[Fat] is more beautiful close up than you would imagine”.

About this map, she says: “Can you see the mitochondria? There are 5 hidden in the map. They are the organelles inside our cells responsible for energy generation”.

Many thanks to Daniel Honan for emailing me about Odra Noel’s map, found here in the New Scientist. The map is part of The Royal Society’s Summer Science Exhibition, which ran from 2 to 7 July at Carlton House Terrace in London. More examples of Odra Noel’s scientific art at her own website.

[1] Not Jane Tennison, the flawed detective portrayed by Helen Mirren in the British cop show Prime Suspect, but Alfred Lord Tennyson (1809–1892), one of the most popular English poets of the Victorian age. It is a curious tradition in crime fiction to name top sleuths after literary greats – perhaps initiated by Raymond Chandler, whose private eye Philip Marlowe takes his name from Christopher Marlowe, the Elizabethan playwright. The quote used here is from Ulysses (first published in 1842), which is one of Tennyson’s most beloved poems. It was also quoted by ‘M’ in the latest Bond movie, Skyfall.

[2] Unless you believe in reincarnation, as do most Hindus and Buddhists, and some on the fringes of the Abrahamic faiths (the Druze, the Rosicrucians, followers of the Kabbalah, among others); or in communication with the dead, as do many others. Either way, there are no undisputed eyewitness reports of what actually goes on in heaven. Perhaps, heaven, as the Talking Heads claim, is a place where nothing ever happens.

[3] The highest level of Jannah, the Muslim version of heaven, which is accessible by eight gates.

[4] The title of another Tennyson favourite, very quotable at funerals: “Twilight and evening bell, / And after that the dark! / And may there be no sadness of farewell, / When I embark; / For tho’ from out our bourne of Time and Place / The flood may bear me far, / I hope to see my Pilot face to face / When I have crossed the bar.” Full text here.

[6] A.k.a. body fat. In the severely obese, excess adipose tissue hanging off from the abdomen is called panniculus, which can range from Grade 1 (not covering the genitalia) to Grade 5 (extending beyond the knees).

[8] Neurodegeneration is the general term for a variety of diseases, like Parkinson’s and Alzheimer’s, that are the result of the malfunction or destruction of neurones, the cells that transmit information in the brain.

[9] Type 2 diabetes, the disease’s most common form, is caused by a diet high in fat and/or sugar, and a lack of exercise.

[10] Human Immunodeficiency Virus, first clinically observed in 1981. Before its present name, the Center for Disease Control called it the ‘4H Disease’, as it seemed to single out Haitians, homosexuals, haemophiliacs and heroin users. HIV gives rise to AIDS (Acquired Immunodeficiency Syndrome).

Becoming less physically active as you get older is not inevitable.
Up Next
Culture & Religion