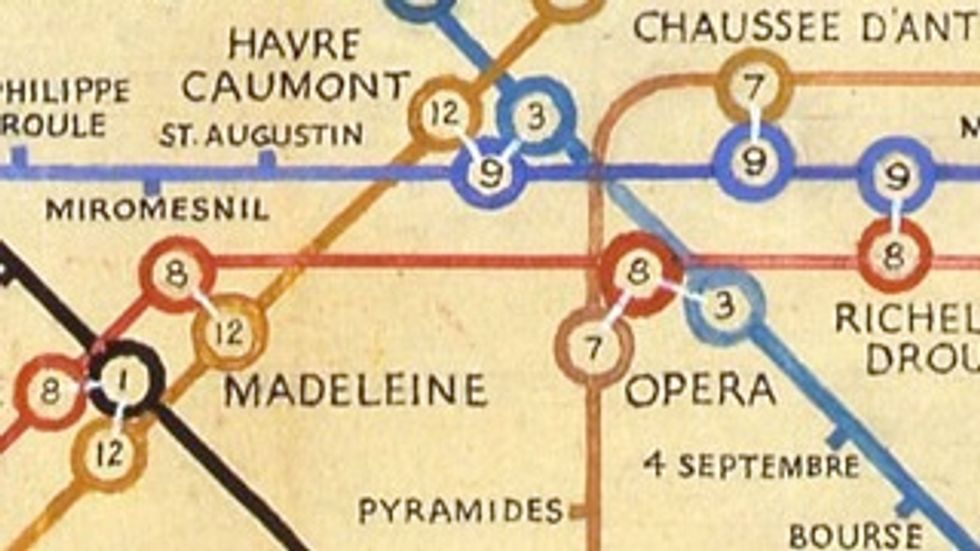 Last week, Harry Beck finally got his blue plaque. The house where the designer of the iconic London Tube map spent his first years is now marked by a memorial sign - and unlike English Heritage's other plaques, the one affixed to 14 Wesley Road in Leyton (East London) is the font used on London Underground maps [1].

It is a small but telling accolade, illustrating of the stature of Beck's Tube map - voted the second-most iconic example of British design in 2006 [2]. Introduced in1931, Beck's Tube map revolutionised the design of urban transport mapping by sacrificing geographic accuracy for diagrammatical simplicity. His colour-coded Tube map, all straight lines and fixed distances between stops, owed more to electric circuit boards than to the London street map.

The map's geometric guidelines have been adopted by many - if not most - other public transport systems the world over. But recognition for Beck's contribution to public-transport history came late.  In fact, his initial proposal was greeted with lukewarm approval by the transport authorities. In 1960, they relieved him of his duties overseeing Tube map updates; subsequent changes were made without his approval, and Beck's own proposals for new maps were rejected. He remained angry over London Transport's decision until his death in 1974.

Nor were Beck's cartographic ambitions limited to the London transport system. He started work on a Paris metro map some time in the 1930s, and submitted it to the French authorities in after the war - only for the map to be rejected.

How different things could have been. If Paris had gone for Beck's post-war design, he would have been the father of not just one, but two main metropolitan transport system maps.

Beck's Paris Metro map is clearly related to his schematic map for the London Underground, all its angles at either 90 or 45 degrees, any unnecessary details erased. The Seine river's meander through the city is stylised into a symmetrical sweep across the map's bottom left quarter, its bracket-like shape broken only by the Île de la Cité [3]. The smaller Île Saint-Louis [4] has been erased off the map: unlike its larger neighbour, it doesn't have a metro stop.

Capturing the Paris Metro in a schematic map proved even more challenging than reducing the London Tube to the now-famous diagram: the Parisian stations were more concentrated in the centre, and its lines were much more interwoven, leading to a higher number of interchanges - and to some very curvaceous lines. Beck picked out a few metrolines to form what seems to be the eternally recurring, basic matrix of a metro map: an axial line (the Ligne 1, running east-west), and a circular line (by juxtaposing Ligne 2 and Ligne 6 on the map to form a rounded rectangle). He added in the other lines, straightening them out as much as possible.

Beck's initial proposal was rejected by the Paris Metro operator RATP [5] - but the same fate had befallen his first suggestions for the London Underground. Undaunted, the draughtsman returned to his drawing board. But his second, improved, full-colour map, presented in 1951, was also given le cold shoulder. Some speculate that Beck's oversimplification of Parisian geography was simply too unpalatable for local tastes. It could also be argued that the map looked too 'British' for Paris [6]. The map fell into oblivion, and was only published for the first time in Mark Ovenden's 2008 book on the Paris Metro [7].

But in the end, Beck won - albeit posthumously. In 1999, a quarter century after Beck's death, the Paris Metro bowed to his vision, and after almost all other world cities had adopted the circuitboard approach to metro mapping, it too switched to diagrammatical mapping. Beck's Paris map survives as an oddity from an alternate universe, of a London-flavoured French capital, comfortable with straight lines on maps where there were none in reality. And perhaps confident enough to have double-decker buses navigate its boulevards and avenues…

[1] Initially known as 'Underground', Johnston is a sans-serif typeface commissioned exactly 100 years ago for the Underground Electric Railways Company of London, and adopted for the whole of London Transport in 1933. Following a redesign in 1993, the Gill Sans-like type is now called New Johnston. ↩

[2] After Concorde, but before the Spitfire. See this article in The Independent. ↩

[3] 'The head, heart and marrow of Paris', according to a 12th-century chronicler, the Isle of the City may have been the location of a settlement of the Parisi, the Gallic tribe that gave the French capital its name. The cradle-shaped sland later became the focal point for the Roman and early Frankish administration of the country now known as France. Paris, described from the perspective of the island, was Outre-Petit-Pont (Beyond the Small Bridge, i.e. the Left Bank) and Outre-Grand-Pont (Beyond the Large Bridge. on the Right Bank). Both bridges were aligned to the cardo maximus, the north-south-oriented road that was the main street of planned Roman cities. The island's best-known landmark these days is the gothic cathedral of Notre-Dame de Paris. A marker on the square in front of the cathedral is the point zero des routes de France, the point from which all road distances in France are measured (it is the start of the Route Nationale 1 to Calais, for example, and it is exactly 668,165 km from the casino in the seaside resort of Biarritz). ↩

[4] In the 13th century, it was cut in two by a canal, its western called the Île Notre-Dame, and it eastern half the Île aux Vaches (Cow Island). Because of the grand houses built on the island, it was known as Île des Palais, before receiving its current name (after Louis IX, king and saint) in 1725. ↩

[5] Régie Autonome des Transports Parisiens, a.k.a. to its less than satisfied customers as 'Rat Pee'.The state-owned company not only operates the Paris Metro, but also most other public transport in Paris and the surrounding region, as well as several franchises outside of France, including trains in South Africa and Tuscany; trams in Hong Kong, Casablanca and Florence; buses in London, Bournemouth and Macau; and metro lines in Mumbai, Manchester and Sao Paulo. ↩

[6] Double-decker buses were briefly trialled on the streets of Paris in the 1960s, but ultimately rejected, for the same reason. ↩