The Why (and Where) of U.S. Radio's K and W Call Signs 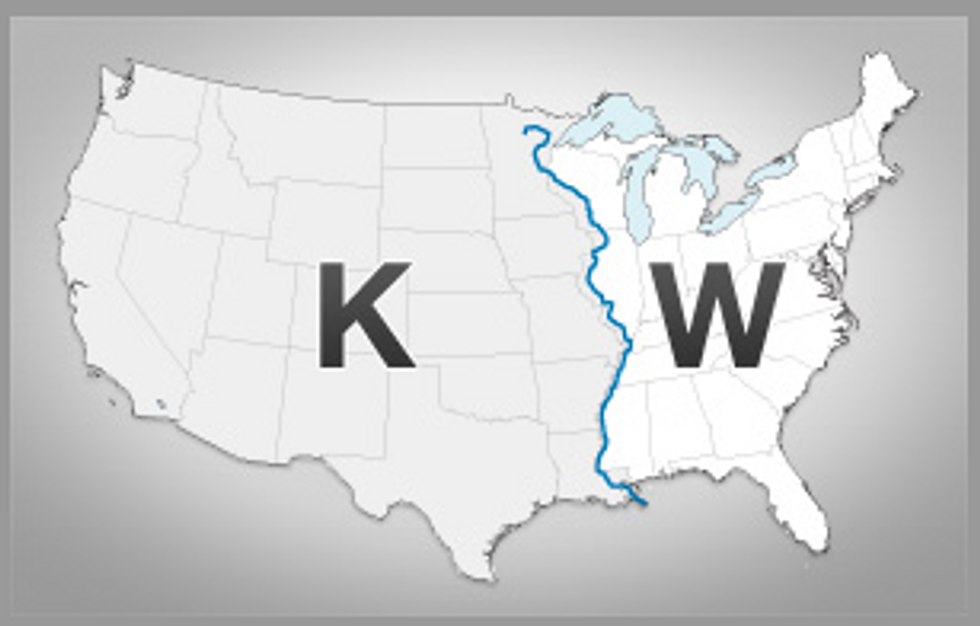 The natural state of any territory, it seems, is binary. The centre cannot hold. So it splits in two. France is Paris and la province. Russia is European and Asian. Belgium is Francophone and Dutch-speaking. In Italy, the North is distinct from and even opposed to the South. So too in England [1], while in Scotland it is the Highlands versus the Lowlands. America, for its part, can be described as a pincer-like dichotomy: a bi-coastal entity separated by the flyover states [2].

Of course, some cookies can crumble in more than one way. Not only is Germany still digesting its decades-long divide into capitalist West and communist East, but is also splits into gastronomically distinct northern and southern halves, along the so-called White Sausage Equator [3]. China is an industrious coastal zone with a western interior in catch-up mode. But it also speaks Mandarin in the North, and Cantonese in the South.

The U.S. can be split in (at least) three different ways into dual geographies. There's that bi-coastal pincer movement, as per above. There's the historical division into North and South. Finally, there's the distinction of 'Back East' versus 'Out West'. An informal dividing line between the latter pair is the Mississippi, a waterway also used to demarcate the border of 10 states [4].

The river as whole also serves as a single divider, surprisingly enough in the realm of radio - a medium that, on the face of it, is not as bound by the strictures of territorial demarcation. West of the Mississippi, all radio stations have call signs beginning with K. East of the river, all call signs start with W [5].

The origin of the division goes back just over a century. In 1912, the U.S. federal government started licensing terrestrial radio stations, assigning the call letters W and K to stations in the east, respectively the west of the country. Those letters were the result of international agreements hammered out at International Radiotelegraphic Conferences at the beginning of the 20th century.

Appendix 42 to the Radio Regulations of the International Telecommunications Union (ITU) [6] still lists all international call signs, as assigned at the 1912 London conference. For instance:

It seems that the letters A and N apply only to military radio stations (A to Army and Air Force, N to Navy and Coast Guard) - and that they are the basis of the otherwise seemingly random choice for K and W.  The Morse Code for A is dot-dash (.-) and for N is dash-dot (-.). Add a dash to each, and you get W (dot-dash-dash, or .--) and K (dash-dot-dash, or -.-).

Incidentally, radio call signs are reversed out on the ocean. Ship radios on America's Pacific coast start with W, and with K on the Atlantic side [7]. It's unclear whether this practise, which precedes call signs for terrestrial radio, is the reverse by intention (i.e. to facilitate the distinction between radio stations on land and at sea) or, as some sources state, the result of miscommunication. In the latter scenario, the aim was to extend W call signs to radio stations on land in the west of the country, and K to terrestrial stations in the east - but the instructions got scrambled somewhere between the draft of the order and its implementation.

Quite early, the border between K Country and W Land had to be fixed geographically. But that dividing line lay further to the west than it does now: it followed the border between New Mexico in the west with Texas and Oklahoma in the east, then north along Colorado's eastern border with Kansas and Nebraska, Wyoming's eastern limits with Nebraska and South Dakota and finally Montana's with the Dakotas.

This was possibly done to continue distinguishing between ship radios in the Gulf of Mexico (which started with K) and land radios in Texas (which started with W when it was an 'eastern' radio state).  A decade into the first federal regulation of station call signs, the K/W line was moved to the Mississippi, turning Texas and 10 other 'eastern' (W) states into 'western' (K) ones [8].

After January 1923, new radio stations in the switchover states would be assigned a K call initial rather than a W one. But a grandfather clause provided that those radio stations in those states which already had a W call sign could keep it. This explains some of the anomalous call signs still in existence today, if not quite all of them.  There are currently 27 exceptions to the general K/W divide - 9 Ks in W Country, and 18 Ws in K Land. This map shows them all, and colour-codes [9] them into seven categories:

2. Purple: Anomalous assignment, in 1920-'21, of KD call sign to stations across the country - both east and west of the Mississippi. Only remaining station: KDKA in Pittsburgh, PA.

3. Gray: Formerly 'portable' stations that got their call sign in one zone before taking root in the other one. Three extant examples, all having moved from W Country into K Land: WBBZ, WIBW, WMBH.

4. Dark Green: Regular radio stations that originated on the western (K) bank of the Mississippi before moving over to the eastern (W) bank: KOTC, KSGM.

5. Red: Exceptional grant of a request to deviate from the general rule. Two Ks in W Land (KFNS, KWAM) and four Ws in K Country (WDBQ, WHO, WMT, WSUI).

Note that Louisiana and Minnesota are marked separately on the map: they are the only states bisected by the Mississippi, and call sign practice varies greatly as a result.

As noted by Thomas H. White, "[i]n 1987, the Federal Communications Commission noted that the current staff practice was to define the remainder of the [K/W] boundary [in Minnesota north of the Mississippi's source] as "a line from [its] headwaters to a point [at the Canadian border] just east of International Falls".

The general K/W map taken here from Media Heritage, a website 'Preserving Radio and Television History'. The map of the border switch to the Mississippi taken here from Grilling Addiction, '[y]our source for grilling tips, tricks, techniques and recipes all year round'. The overview of anomalous call signs taken here from Mr. White's United States Early Radio History, 'Articles and extracts about early radio and related technologies, concentrating on the United States in the period from 1897 to 1927'.

[5] This narrows down the location of Springfield, hometown of the Simpsons. Several episodes feature radio station K-Babble, call sign KBBL - placing the intentionally hard-to-pin-down city west of the Mississippi. ↩

[6] For an overview of all call signs, see this page on the ITU website. ↩

[8] Nine states entirely (North and South Dakota, Nebraska, Kansas, Oklahoma, Texas, Iowa, Missouri and Arkansas), and the larger area of two states bisected by the Mississippi (Minnesota at its source, Louisiana at its mouth). ↩