The Mysterious Enclave Complex of Madha and Nahwa

Border weirdness on the Arabian peninsula 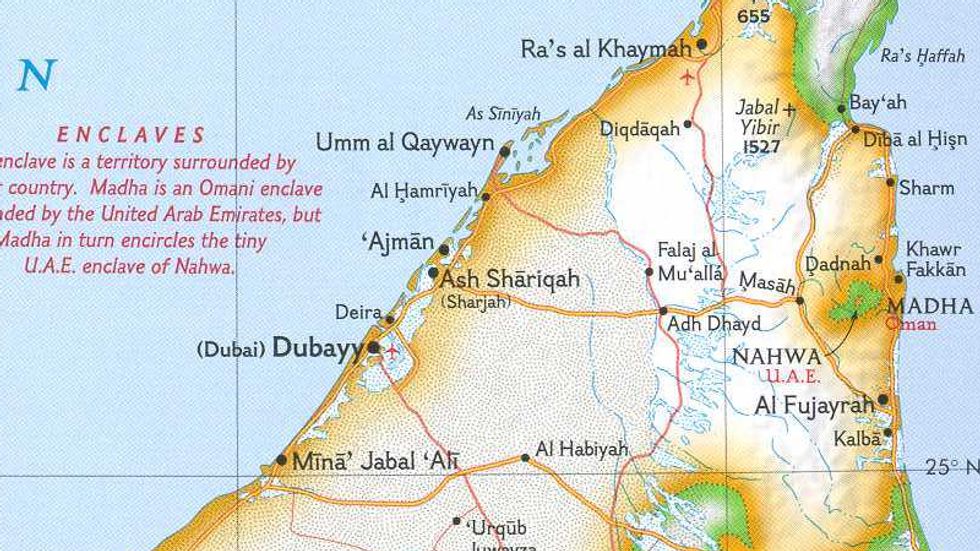 These names sound like they’re out of Arabian Nights – and that is just about right. Madha and Nahwa are the names of two territories on the Arabian peninsula which you probably have never head of. Unless you scan maps for weird borders. Together, they form a type of enclave/exclave complex which I would like to call Sunny Side Up, as it resembles an egg thus fried.

The territories are situated on the horn of the peninsula, the one pointing at Iran, separated from it by the Strait of Hormuz. The tip of the horn is an enclave of Oman, the mainland of which is further to the south. On this map, that little piece of Oman on the Strait is not separately named, although several towns are (including Kumzar, on its own oil spill-shaped peninsula) and one interesting natural feature is pointed out: the Jabal al Harim, surprisingly high at 2.087 metres.

One always thinks of Arabia as flat, sandy desert – apparently not entirely correct.

Below this unnamed enclave, and separating it from Oman proper, the territory of the United Arab Emirates fans out south and west, giving the UAE sea access to the Indian Ocean. By the desolate look of it, this shore is a pretty different one from the UAE's shore on the Gulf, where lies the glittering metropoles of Dubai and Abu Dhabi.

On the same latitude as Dubai, but closer again to the Indian Ocean, lie Madha and Nahwa. Madha (75 sq. km) is an Omani enclave within UAE territory, while Nahwa in turn is UAE land, completely surrounded by Oman and part of the Emirate of Sharjah. This rather complex border situation was definitively demarcated only in 1969. Nahwa only consists of a few houses, while most of Madha is uninhabited, making the necessity for this particular delineatory arrangement even more mysterious.