Published in 1912, Tarzan of the Apes was the first of 24 adventure books written by Edgar Rice Burroughs featuring the son of a British lord and lady raised by Great Apes in Africa. The protagonist’s English name is John Clayton, his title Lord Greystoke – but he’s better known by is ape-name Tarzan (‘Whiteskin’).

Tarzan meets and falls in love with the American Jane, with whom he leaves the jungle. They marry, live in England, raise a son Jack (ape-name: Korak) and eventually return to Africa to escape the hypocrisy of civilisation.

In Burroughs’ 12th Tarzan book, Tarzan and the Lost Empire (1928), the ape-man comes across a lost Roman province located in a secluded canyon on the African coast. This map is taken from the back of that book. It shows the canyon, and describes some features of the province in elementary Latin: 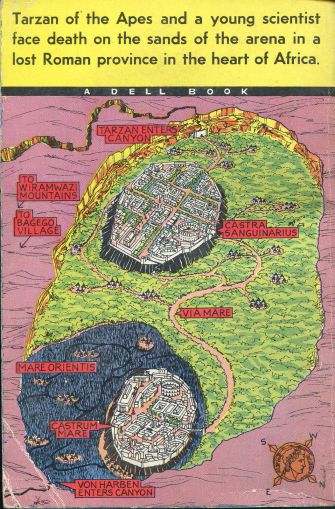 Here is some trivia you might not have known about Tarzan:

The biologist Jane Goodall cited Tarzan as a major influence on her childhood and subsequent career choice. She felt she would have been a much better wife for Tarzan than Jane, and fulfilled her lifelong dream when she was able to live among the gorillas, just like Tarzan did.

In the 1950s and 1960s, there existed a thriving industry of bootleg Tarzan adventures in Israel, in which the would sometimes take Israel’s side in the fight against the Arabs, especially Nasser’s Egypt. A parallel batch of pirated Tarzan stories in 1950s Lebanon and Syria showed Tarzan taking the Arab side against the fiendish Israelis.

In all, the Internet Movie Database lists 88 Tarzan movies between 1918 and 1999. The most famous Tarzan actor must be Johnny Weissmüller, who played the role from 1932 to 1948.

The Californian town of Tarzana was named after the character, in honour of one-time resident E.R. Burroughs.

The March 1959 issue of Man’s Adventure featured a story titled The Man Who Really Was… Tarzan, which claimed that Tarzan’s character was based on the real-life William Charles Mildin, 14th Earl of Streatham. This Earl was supposed to have lived among the apes from age 11 to 26, returning to England in 1883. The article is generally thought to be a hoax.

Illustration was taken from this page at Pulp Covers, a page dedicated to “the best of the worst”.

Inequality should be measured in terms of the time it takes for us to earn the money to buy the things we need. And everyone is getting wealthier.
Up Next
Strange Maps