What to do about a dream that’s too big for reality? You could map it, among many other things. That map could serve as an exhortation – This is the plan, get going! But if the gap between cartography and reality remains unbridged, it becomes a souvenir of the road not taken.

Strangely, public transport is particularly susceptible to the sort of dreams that can only live on maps. See, for example, the Uruguayan obsession with the non-existent metro of its capital, Montevideo (#590), and the Ghost Subway of Rochester, NY – a resurrected and expanded version of the metro that ran underneath the town until 1956 (#376).

This map adds a third – and much bigger – transport system to that list: An overview of what a high-speed rail network across the United States could look like. It was created by Alfred Twu, who is not just  a designer at MWA Architects, a Bay Area bureau, but also a bit of a train nerd. “Having worked on getting California’s high speed rail approved in the 2008 elections, I’ve long sung the economic and environmental benefits of fast trains”, he wrote in an op-ed piece in The Guardian. 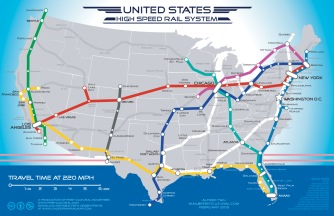 The US High Speed Rail Map sprang from the overlap of Mr. Twu’s designer and trainspotter personae. It was born out of a frustration familiar to all fast train fans in the U.S.: the building of a high-speed rail network requires more money and political will than the American political system can seem to muster. The Obama Administration’s proposals for a non-integrated collection of high-speed rail corridors across the country were killed off, and in 2011, high speed rail in the U.S. was declared dead, now and forever.

Exactly the kind of intolerable cruelty that this map seeks to remedy. But the map does more than right that wrong, it also reflects Mr. Twu’s personal preferences: ” [It] comes […] from the heart. It speaks more to bridging regional and urban-rural divides than about reducing airport congestion or even creating jobs, although it would likely do that as well. [High-speed rail] is duct tape and string to reconnect politically divided regions. Its colourful threads weave new American Dreams.”

Let’s have a look at those threads:

Zipping along all these lines are trains travelling at 220 mph (355 km/h), transporting the passengers in this alternate universe from L.A. to Las Vegas in under two hours, and from San Francisco to New York in about 20. New York to Boston would take under an hour, while D.C. to Boston would take about three.

In the unlikely event America ever gets a high-speed rail network, it is even more unlikely to look exactly like this one. Still, this map is plausible enough for train nerds (and map nerds) to do some armchair travelling. All aboaaaard theMirage Express!

One detail seems out of place, though: Why does the Purple Line terminate at Quincy? That Illinois city counts less than 60,000 souls. Among its more notable attractions is the annual Catfish Anglers Tournaments, America’s largest annual fishing contest; it is the birthplace of P.W. Tibbetts, Jr., the pilot of Enola Gay, the plane (named after his mother) that dropped history’s first A-bomb used in warfare. Neither fact seems to merit the smallish town’s elevation to the terminus of a high-speed train line. Perhaps this is Mr. Twu’s way of indicating when hell will freeze over: when the high-speed train rolls into Quincy, Illinois…

Many thanks to Andrew Porter and Alex Meerovich for sending in this map, found here on Mr Twu’s site for a California Rail Map (but that’s another story altogether).

Update: Many thanks to Bob Fleck for sending in this link to a map competition hosted by Greater Greater Washington, a DC transit and urban planning blog, encouraging people to send in alternate maps of the DC Metro system, covering upcoming new routes.

From politics to culture, we blame “tribalism” for humanity’s problems. This explanation is entirely wrong.
Up Next

How Much Healing Does Healing Take?

Our attitude toward the pathologizing may be more destructive than the pathologizing itself.—James Hillman, Re-Visioning PsychologyTrauma affects all of us. Types of trauma—physical, emotional, violent, intrusive, social, or the product […]