The Legend of the Tsar's Finger

A map legend from Imperial Russia. 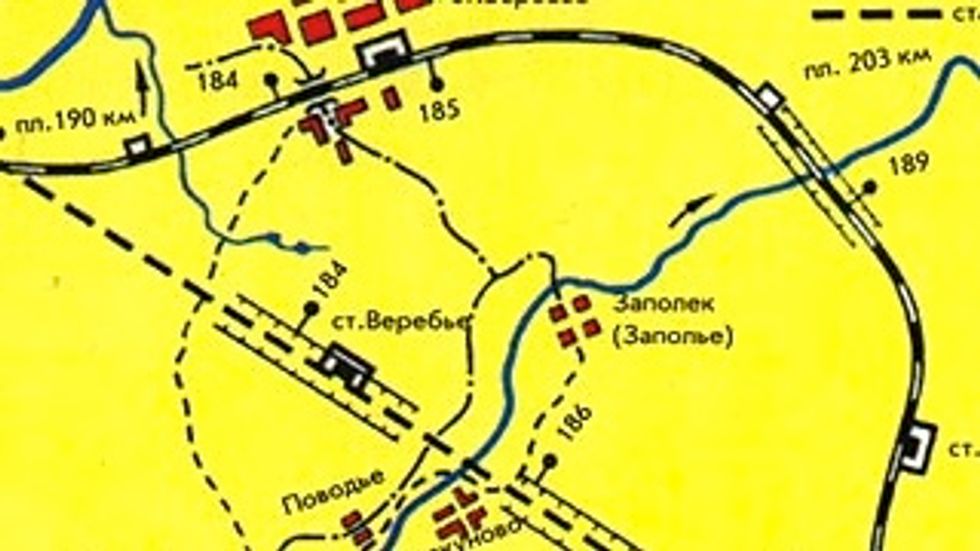 It's 1841, and Russia is attempting one of its great leaps forward to catch up with the rest of Europe. Railways are all the rage out west. So the Empire would like to lay some track of its own . There’s more than prestige at stake: the new transport technology might just be what the vast, badly connected country needs [1].

But at this point, the project seems at a standstill. There’s only one single stretch of railtrack in the entire country: the line connecting the Imperial capital of St Petersburg with Tsarskoye Selo, the Imperial summer residence 15 miles further south.

Tsar Nicholas I’s glorious vision - a railway connecting St Petersburg with the Empire’s second city, Moscow - is held back by the bickering of engineers. Unable to agree on the best route of the future railway line, they test the patience of the Russian autocrat until it snaps. In exasperation, Nicholas snatches the map from the dithering technicians, grabs a ruler and draws a straight line between both cities: Gentlemen, there’s your route!

In Imperial Russia, the Tsar’s will is the law. So his engineers have no choice but to lay down the tracks exactly as he has determined: in a straight line. Except for one curious deviation. Near Verebye, the straight track is abandoned for a semicircular deviation known officially as the Verebinsky Bypass.

The anomaly is also known as the Tsar’s Finger, because the story goes that Nicholas I stuck out a finger over the ruler, and in his furious impatience, simply drew around it. Since nobody dares to correct a Tsar, especially not an angry one, the railway was built exactly like Nicholas had demanded, bypass included.

Even if you don't read Russian, you won't need long to locate Verebye on this 1884 map of what then was known as the Nikolayevskaya Zheleznaya Doroga ('Nicolas's Iron Road'). It's that little nick in the line just northeast of Novgorod (the only large city on this section of the map). Looking at this map, it's easy to believe the story of the Tsar's Finger. Unfortunately, it's too good to be true: the Moscow-St Petersburg Railway was completed in 1851, four years before Nicholas died of pneumonia [2]. The curve in the otherwise remarkably (but not entirely) straight railway line wasn't built until 1877.

The bypass fixed a problem plaguing the line since its opening. Nowhere else was the gradient of the railway as steep as at Verebye. Trains coming from St Petersburg rushed down the incline at such a speed that they couldn't stop at the next station; trains coming from the other direction needed four locomotives to make the climb. By constructing a curve that gradually overcame the height difference, the problem was overcome.

The Tsar's Finger was in use for almost 125 years; advances in locomotive technology had long since rendered the detour unnecessary before the track was restored to its original, straight course in 2001. The trip between Moscow and St Petersburg was shortened by 3 miles, to 404 miles.

While there is no literal truth in the story 'explaining' the Verebinsky Bypass, like many other urban legends, it resonates with our perception of the subject. In this case, the relationship between Russia and its ruler [3]. From the Tsars through Stalin to Putin, Russia is eternally in need of a strong leader, who can bash heads together and get things done. Without these strongmen, Russia is condemned to bureaucratic dithering, counterrevolution, or capitalist chaos - respectively.

Many thanks to Nigel Draper, who learnt about the Tsar’s Finger at the St Petersburg Railway Museum and sent in the story, found here on Wikipedia. The first map found here on the Pskov Railroad website, the second one here on this Russian-language Livejournal blog.

[1] The Transsiberian Railway will form the backbone of Russian, and later Soviet dominance in northern Asia, connecting Moscow with the Pacific port of Vladivostok. It will be inaugurated in 1890 by Tsar Alexander II, and completed in 1916, on the eve of the Russian Revolution.

[2]The line took 9 years to complete, and required the building of 184 bridges (one across the Volga). In 1923, the railway was renamed from Nikolayevskaya to Oktyabrskaya, to honour the October Revolution of 1917. Since 2009, the new high-speed Sapsan trains have reduced the travel time between Moscow and St Petersburg to 3 hours and 45 minutes.