The world may be your oyster, a stage, or one big hospital [1], it is also a Disney ride. It’s a Small World After All (IaSWAA) can be experienced at each of the five Disney parks [2] across the world. The ride has been thrilling – and its repetitive and catchy theme song annoying – guests since 1964, when it debuted at the UNICEF pavilion at the New York World’s Fair.

When we say ‘thrilling’, we mean mainly for the up-to-four-year-olds: IaSWAA is a slow, spatter-free boat ride through scenery set to represent the entire world, replete with 300 robotic children singing the eponymous theme song in different languages [3].

The original ride fit in nicely with the overall theme of the World’s Fair [4], which was meant to celebrate ‘Man’s Achievement on a Shrinking Globe’. But in fact, IaSWAA’s presence at the Fair was a try-out for Disney; and it proved popular enough to be introduced to Disneyland in 1966 [5].

The vibrant colours, simple and repetitive music and limited range of doll movements are surely elements of the ride’s continued popularity – especially with Disney’s younger customers. Might it be too much wishful thinking [6] to presume that its geographic angle is also part of the attraction?

Surely, for many of those tiny visitors, this must be their first introduction to the concept of the ‘whole wide world’, and its rich diversity of landscapes, languages and peoples. Perhaps this is why the potentially bewildering concept of the world’s vastness is sugarcoated by the reassuring message that it’s a small world after all. And not a huge, violent, incomprehensible and sometimes even downright impolite one.

In this light, IaSWAA can be seen as an important tool for social engineering, nipping xenophobia and jingoism in the bud and imbuing kids at their most impressionable ages with a cosmopolitan outlook on the world [7]. But does it also teach geography worth remembering? 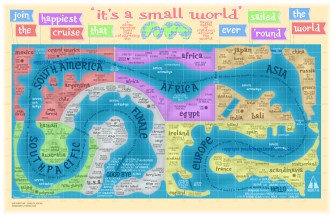 Well, no – unless for its novelty value. Disney’s Small World may be the first ‘global’ experience for many kids, it’s not the best possible introduction to the correct layout of the world’s countries and continents. Due to the constraints of the ride, what passes for the world is laid out in a continuous strip, on both banks of a world river, with obvious sacrifices to accuracy.

Make-believe geography has Denmark border France – which must please Henri [8], the French-born prince consort of the Danish queen. Inevitably, the Eiffel Tower and cancan dancers symbolise the Hexagon; are tourists visiting Paris disappointed when it turns out the boulevards and avenues of the French capital aren’t teeming with girls lifting up their skirts to show off their twirling legs? 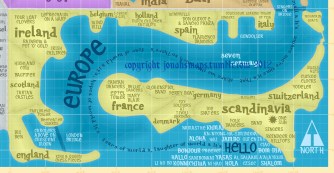 All this is happening rive droite, while on the left bank of the ride, Tower Bridge [9], Big Ben and the tower of Parliament compete with Beefeaters [10] to paint a postcard-perfect picture of London. The metropolitan scenery melts into a few Scottish and Irish clichés (tartan and bagpipes and shamrock and leprechauns, respectively) before transforming seamlessly into Belgium, Holland (tulips and windmills) and Spain and Italy (windmills and Don Quixote, the Leaning Tower of Pisa). Across the water, Germany’s glockenspiel abuts Switzerland’s yodelers and cuckoo clocks.

The second bend brings the boats abruptly from Europe to Asia, avoiding the usual gateway of Istanbul to proceed via Israel (chuppah [11] wedding), Indonesia and Bali (the Hindu goddess Kali), India (flying carpets and the Taj Mahal) and Thailand (folk dancers) on the left bank, and on the right: Greece (shepherd with pan flute), Russia (cossacks and Red Square), China (pandas and the Great Wall), Japan (Mount Fuji) and Korea. 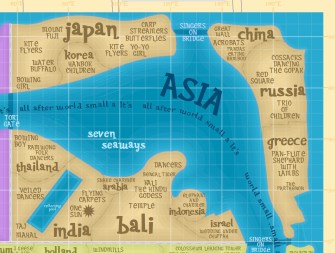 Past a Torii Gate [12], Asia suddenly gives way to Africa. Egypt is the only nation clearly distinguished, with the Sphinx and its pyramids; the other exhibits refer to a generalised, generic Africa: lots of wildlife (lions, zebra, monkeys) and straw huts. 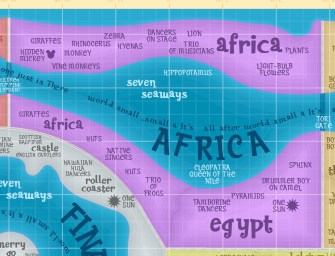 A pink elephant marks the border with South America, with Argentina (penguins and gauchos), Brazil (carnival dancers), Chile (llamas) and the rain forest occupying the left bank, and Central America (blue oxen – really?), Mexico (Aztec pyramids, sombreros) and more rain forest on the other side. 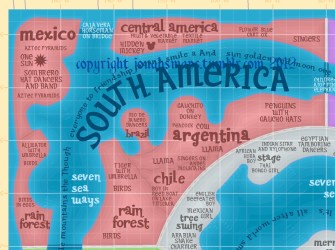 The penultimate section transports the visitors to the South Pacific, showing off Hawaii’s hula dancers, Australia’s marsupials (koalas, kangaroos and suchlike), and the drummers and dancers of New Guinea, Polynesia and Tahiti. 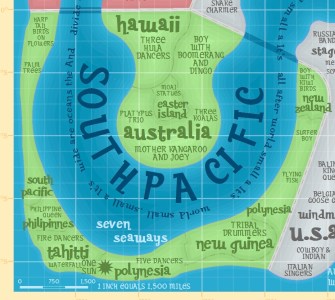 The last section is the grand finale, a resumé of what went before: dolls of all nations sing together in harmony, from Russian boys to Thai girls; French cancan girls and a few other famous stereotypes [13] make a second appearance.

Exiting IaSWAA, impressionable young minds have learnt a thing or two about the wide, wonderful world we live in: it is replete with a small selection of stereotypes, in three categories: architectural (France equals Eiffel Tower, no Egypt without pyramids), musical (the Spanish love flamenco dancing, bagpipes are typically Scottish), and natural (India is filled with tigers, Holland with tulips); music is the universal language; and beneath their exotic veneer, people (or at least Disney’s mechanical dolls) are really just all the same.

Oh, and Australia borders Hawaii, Holland is next to Spain, and Thailand is just across the water from Japan…

Many thanks to Jonah Adkins for researching, producing, and sending in this map. It can be found here on his website. Also check out this map of Lost, and other cartographic stuff.

[2] There are Disney Parks and Resorts in California, Florida, Paris, Tokyo and Hong Kong. A sixth one, in Shanghai, is slated for 2016.

[3] If our sources are correct: English, Spanish, Japanese, Italian, and Swedish.

[6] The best of the possible options will turn out to be the right one. The reverse of Murphy’s Law: Whatever can go wrong, will go wrong.

[7] This is your cue to start ranting against the United Nations, Skull and Bones, the Bilderberg Group, the Trilateral Commission, the Freemasons, the Illuminati, and/or any other society steering the the planet towards one-world government. Or should that be, small-world-after-all government?

[8] Full name, Henri Marie Jean André de Laborde de Monpezat (b. 1934). An accomplished poet (in French), the prince-consort is more in love with his wife than with his adopted country – to put it mildly. In the early 1990s, he even ‘eloped’ back to France for three weeks, before he resumed his official duties. Decades ahead of the current vogue for celebrity cookbooks, he published a collection of favourite recipes, entitled ‘Ikke altid gåselever’ (Not Always Foie Gras).

[9] Often confused with London Bridge, which is the subject of the famous nursery rhyme, but less recognisable as it lacks the other’s two towers. The rumour that this confusion played a part in the sale (1967) and relocation (1971) of the previous London Bridge to the United States, was strenuously denied by Robert P. McCullough, the chainsaw baron who used the Bridge to attract interest in a development scheme on the shores of Lake Havasu, on the Arizona-California border.

[10] Officially called the Yeomen Warders, these remarkably attired guardians at the Tower of London are an attraction in their own right; their nickname may derive from their ancient privilege to eat as much beef from the King’s table as they desired.

[11] The canopy under which traditional Jewish marriages are concluded, symbolising the young couple’s new home.

[12] A traditional Japanese gate found at shinto temples, marking the border between the profane and the sacred.

[13] And a few lesser-known ones. Belgian goose girl?

Jaron Lanier: What it Means to be #Human

New businesses in Silicon Valley and Alley have tremendous power over what it will mean to be human in the coming decades. And with great power comes great responsibility. We hear often that the world is changing fast – we talk less about what we’d like it to change into.