556 - The World on your Shoulders: Map Tattoos 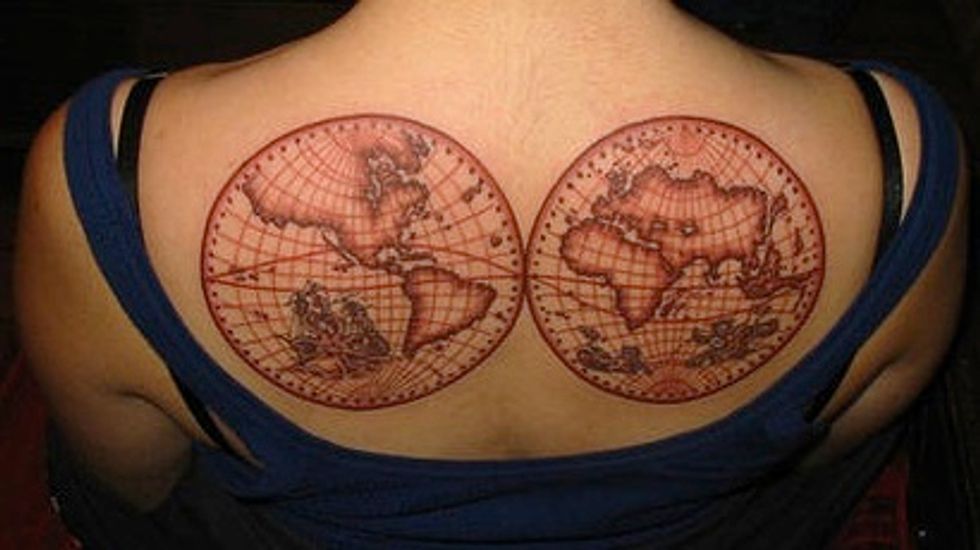 I’m still not sure what Pinterest is for [1], but scrolling a recommended collection of maps on the site, I couldn’t help but notice that the number of cartographic tattoos was remarkably high. This blog has featured map tattoos on two earlier occasions [2], but the cornucopia of examples - and the emergence of a few curious patterns - warrants a second, closer look.

The World on Your Shoulder - the most popular cartographic tattoo according to a non-scientific study conducted by this blog (This image taken here).

Tattoos have made a remarkable comeback over the last century. Very little material evidence remains, but a few inadvertent glimpses into the distant past point to tattoos being very widespread in prehistoric times. The skin of the iron-age corpses retrieved intact from permafrosted Siberian graves [3] was rife with depictions of wild animals, dancing the hunt. Pritani, the oldest known name for inhabitants of Britain (and the origin of its name), means ‘the Painted People’, after their prominent tattoos.

Looks similar to the one above, but note the variation in centricity: the previous one has the Pacific in the middle, this one is centred on Europe/Africa. (Original context here).

Whether it was disdain of the civilised for the primitive, or a proscription for the pious from the profane [4] is a matter for tattoo historians, but fact is that inked skin pretty much seems to have disappeared from Europe from the advent of Christianity until the exploration of Polynesia in the 18th century. European sailors then enthusiastically adopted the local tradition of tatau - and by the end of the next century, over 90% of British sailors were tattooed.

Can you tell what's missing on this map? A hint: it's mentioned by name in this post. (Map found here).

Tattoos remained the preserve of the naval, criminal, and other marginal elements of society [5] until the latter half of the 20th century, when a cultural revolution upturned many social norms and conventions. In 1936, only 6% of Americans had a tattoo; in 2003, that percentage had risen to 16%  - a net increase of approximately 10 to 40 million inked Americans. A 2008 study indicated that 36% of Americans in the 18 to 25 age bracket had a tattoo - rising to 40% for the 26- to 40-year-olds.

The world goes round: a nice variation on the world map, now divided in two hemispheres (first seen here).

Today, tattoos have become respectable, or at least acceptable. Celebrities lead the way: Angelina Jolie and David Beckham hit the headlines whenever they add a new one to their already extensive collection. As to subject matter, a few themes dominate (and are subject to peaks and troughs of popularity): the traditional tattoo (anchors, skulls, roses, hearts, swallows), the tribal symbol (Celtic, Native American, Maori, etc.), the calligraphed quote or meaningful maxim, the black-and-gray tonal, the colourful ‘New Skool’ tattoo.

Soon the non-tattooed will be in the minority. But in the new mainstream, new subcultures emerge. Cartographic tattoos, while still relatively small in number, demonstrate a perhaps unwitting unity of characteristics.

He's got the whole wide world in his hands (taken here).

First of all, the world map seems the single most popular cartographic tattoo. Which is a refreshing rebuke to a world (sic) increasingly dominated by nationalism and chauvinism. As for the projection: Mercator certainly seems to have gone out of fashion.  An easy way of verifying whether a world map is in the Mercator projection, is by comparing Greenland to Africa. If the Icy Island is about the same size as the Dark Continent, then you’re looking at Mercator. In actual fact, Africa is 14 times larger than Greenland [6].

The Meridian of Ankle: World Mapping on Foot (taken from here).

The world maps are inked mainly on the back. Is this symbolic? Do the tattoo-ees think they are carrying the weight of the world on their shoulders, like Atlas of classical mythology [7]? Some other tattoo locations are certainly no less symbolic: the world at your feet, the world in your hands. Other map tattoos are more specific, referring to a country or even a city of origin. The link here is more direct: This is where I'm from, and don't you (or I) forget it.

A map of Euskadi, the Basque homeland, on either side of the Spanish-French border. The colours are of the Basque flag, and the bull and swastika-like symbol are ancient local symbols (Provenance here).

No world map - China will do. Chairman Mao is looking on contendedly. (From here).

A Map of New Zealand in what appears to be Maori tribal symbols. (Taken here).

A tattoo/map of Brittany, France's nose. Note the parchmenty look of the tat. (culled here).

Some go so far as to reflect the transit system of their home towns - which can be practical as well as beautiful.

The Chicago metropolitan transit system on a foot...

A small subset of tattoos are what you could call atypical and meta-maps. There’s Angelina Jolie’s list of geographical coordinates, one for every place on earth that each of her children was born. Or that fantastic picture of two friendly right hands, both mimicking the shape of Alaska, and marked with an anchor where Anchorage should be - an elegant reference back to modern tattooing’s nautical origins.

Anchors for Anchorage, and a hand-based imitation of the rest of the state of Alaska. For more on hand cartography, see entries #313, #512, #545. This image taken from here.

A cryptic map of hangout places shared with a friend (presumably s/he has the same tattoo. Otherwise it's a bit creepy). Picture from here.

A beautiful cross-section of geological stratification, reminiscent of the work of Harold Fisk (see #208). From here.

If you yourself have cartographic ink to display - or if this post has inspired you to get your own map tat [8] - please share your artwork by responding to this article with a link to your map.

[1] It’s described as a ‘pinboard-styled social photo sharing website’. So how is it not Flickr? One online marketing expert explains: ‘Flickr links are “NOFOLLOW”, Pinterest’s are not’, while another states: ‘Invariably, those that don’t understand the difference between a content publishing-based social network and a bookmarking-based network will compare the new Flickr to Pinterest.’ I’m too old for this. Somebody please give me a VCR to programme.

[2] A tattoo of the city grid of the German city of Hannover etched across an entire back (#126); and one of the urban layout of Portland, Maine on an upper arm (#392). The original context of the latter map/tattoo shows the same person sporting a state map of Maine on the upper thigh. Talk about pining for the Pine Street State!

[3] These frozen tombs, on the Ukok plateau in the Altai mountains, date from around the 5th century BC, and are linked to a people called the Pazyryk. Many of the tattoos have been re-appropriated by contemporary aficionados. The only Western European example of a freeze-dried ancient corpse is Ötzi the Iceman, who died over 5000 years ago in the Alps. His body is covered by over 50 geometric tattoos.

[6] Everybody is always underestimating (or at least not caring about) the size of Africa. It’s huge, proper huge: #35.

[7] There is some confusion on the origin of Atlas as a term for a collection of maps gathered (somewhat) systematically into a book. Retroactive etymology ascribes the name to the Greek god who carried the world on his back; in fact, Mercator (who made and named the first atlas) referred to the equally mythical, but lesser-known Mauretanian king Atlas, whose knowledge of astronomy was legendary.

[8] Don’t be surprised to keep getting the Caucasus when you google ‘map tat’: the Tats are one of the myriad of peoples in that region of the world.