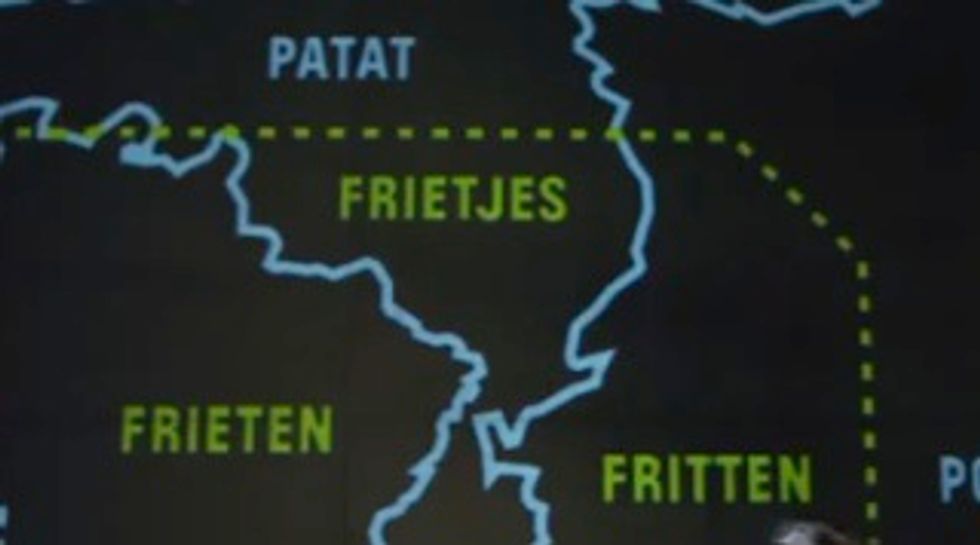 MS: "Oh, I decided a long time ago not to even know, because… I tried to flee Kent in my mind as much as possible."

"Now see, if you are a Man of Kent, right, that’s quite good. You can get demoted to a Kentish Man, because according to the Reverend Samuel Pegge in 1735, he said: Some say that ‘A Man of Kent’ is a term of high honour, while a Kentish Man denotes but an ordinary man."

MS: "Well, I’m from the west of the Medway, so near London."

KE: "That means that you are then a, erh, yes, you’re a Kentish Man. You’re of inferior stock."

MS: "It would have no validity, that theory, if it was the other way round. Linda Smith – who is no longer with us – she came from Erith, which is just up the road from Swanley, and after she died, someone showed me an obituary, and it quoted her as saying: I often used to argue with Mark Steel which of us came from the most awful, horrible town. I would say it was Erith and he would say it was Swanley. And then she said: I always put up a really good case for Erith but deep in my heart I knew he was right."

KE: "I can almost trump that, I come from Chatham in Kent, if you've ever been there…"

MS: "No, you can't trump it because, you know, Chatham has a river and an ex-dockyard, and it's got loads of pubs and Gillingham Football Club up the road and a million things. Swanley has absolutely nothing. I mean, I've yet to know anyone who's actually been to Swanley who doesn't come away and go: I thought you were exaggerating Mark, but you're right."

KE: "What one word would sum up Swanley? Is there one word?"

MS: "I'll tell you one word if I just illustrate it with this little story if you like, not a story but, there's one pub, and it is the most filthy rotten pub, and… it's suicide. I mean it is literally suicide, going in there. I mean, those people going to Switzerland are wasting their money in my opinion. Get a one way ticket to Swanley, go in there and say: I'm not from round here. That'll do it."

KE: "The Kill Yourself Arms."

MS: "Yes, so suicide: that is the one word that would sum it up."

KE: "Let's just do Kent for this whole interview, shall we?"

Or let's not. Rather, let's return to that curious distinction at the top of the interview. It sounds like a non-sequitur: aren't Kentish Men de facto also Men of Kent, and hence in the same category? From a purely semiotic point of view, both labels may be interchangeable. As the French say: chou vert et vert chou [1]. But it turns out that there is an historic fundament to this rather comic-sounding divide.

Kent, the UK's southeasternmost county, is often called the Garden of England, for its orchards and hop plantations. But it's only partly rural; its western bit is well within the commuter orbit of London, and highly urbanised. In fact, some parts of the ancient independent kingdom of Kent such as Lewisham are now an integral part of metropolitan London. The boundary between Men of Kent and Kentish Men does not reflect this rural/(sub)urban divide. Rather, it goes back to the Germanic settlement of England, around 1,500 years ago.

Except in the distinction between Kentish Men (and Maids) on the left bank of the Medway, remnants of the Saxon settlement; and Men (and Maids) of Kent, descendants of the Jutish settlers on the right bank. As for why the former denomination might be a derogatory term while the latter may be considered a badge of honour - this could go back to 1066 and all that. One tradition holds that the Jutish inhabitants of Kent put up much more of a fight against the invading force of William the Conqueror than their Saxon neighbours.

It is remarkable how an age-old distinction, stripped of its meaning centuries ago, can still survive in local memory and language. Another possible example of this I noticed in a series of videos for VIA2018, the bid of Maastricht and its surrounding Meuse-Rhine Euregion [5] to become European Capital of Culture in 2018.

The campaign rests on the premise that the Euroregion - which comprises parts of three different countries and linguistic areas - operates on the principles of the swarm:

This would explain both the differences and the similarities within the Euregio. One similarity refers to the subject of fried potato slices, which are called patat in the north of the Netherlands, pommes in most of Germany, but fritten (or frieten, frietjes, or frites) in Belgium and the other areas of the Euregio. Would it be too far-fetched to infer from this fanciful map the palimpsest of ancient ethnic boundaries between tribes who customarily fried their food, and those who didn't?

The map showing the dividing line between Men of Kent and Kentish Men was found here on the webpage of Kentish singer/songwriter Mick Sumbling. The map of 'Fritland' is a still from a series of videos on the VIA2018 website (here).

Update 16 April 2016 – Many thanks to Tony Leekens for sending in the map below, found in an online article on the naming of 'French fries' in Belgian and Netherlands Dutch.

In general, Belgians use frieten and Dutch use patat to describe (French) fries. The map reflects a number of different uses for the terms, as noted by field dialectologists in 1972. South of the red line, the common word for potato is patat, north of it, it's aardappel (literally: 'earth apple'). French fries are called frieten in the purple zone, and petat in the orange zone. In a few localities, marked with green dots, punters prefer the compromise term patat friet.

Dutch-speaking Belgians (i.e. Flemings) take pride in their frieten, are happy to mock petat, the (to their ears) ridiculous-sounding Dutch equivalent, and are generally quite surprised to find that this word is used north of the Belgian-Dutch border (white line dissecting the purple zone).

According to the article, published on the website of the Flemish public broadcaster VRT, the term frieten is making headway even further north of the language purple/orange border indicated on this map (and already way north of the national border, marked in white).

[1] Literally: green cabbage and cabbage green - i.e. one and the same thing, even if labelled differently.

[2] Very geographically oriented, those Saxons. Hence Wessex, Sussex, Middlesex and Essex. But no Norsex - that's where the Angles settled.

[3] Originating in Jutland, roughly compatible with mainland Denmark. For more about the definition of Jutland, see #46.

[5] An intriguing palimpsest mentioned earlier on this blog: #348. Do you know of any others?