Everybody, meet Kergolus. This little furry thing is a geo-mascot, shaped like the territory it symbolises. Top marks if you’re able to guess which territory that is, either by the mascot’s name or its shape. For this is one of the most obscure bits of dry land on the planet – Kerguelen. The adjectives most often used to describe this archipelago in the southern Indian Ocean might explain why so few people know about it: windswept, treeless, chilly, desolate.

Kerguelen, named after the Frenchman who discovered it in 1772, is made up of about 300 islands, though the bulk of the area is taken up by Grande Terre, the archipelago’s Delaware-sized main island [1]. The archipelago is part of the French overseas territory known acronymically as TAAF [2]. It is one of the remotest places on earth.

There are no permanent inhabitants on Kerguelen, and yet the main island has been permanently inhabited since 1950: rotating teams of French scientists spend tours of duty on the island, mainly to monitor the subantarctic weather, man the satellite-tracking station, and observe the local flora and fauna. One imagines that their presence also serves as a reminder to other powers that this archipelago, desolate though it may be, is French, and will remain so. 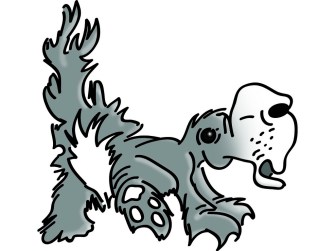 The scientist population varies from 70 in winter to 110 in summer. Depending on whether one has a romantic notion of geography or a practical one, they have the best job in the world, or the worst. Something about Kerguelen – its pristine remoteness, its austere beauty – stirs the soul of the armchair traveller. The main island has certainly been name-checked often enough in popular culture, among others by E.A. Poe and Jules Verne. In 2000, British journalist Matthew Parris fulfilled a lifelong dream by spending a winter on Grande Terre. One of the best books for capturing the archipelago’s remoteness is L’Arche des Kerguelen (1994), by Jean-Paul Kauffman [3].

But for all the appeal of its remoteness, one could be forgiven to find the island only remotely appealing.  It’s no wonder the French considered establishing a penal colony on the island at the end of the 19th century – but decided against it, probably thinking it too cruel on the guards. The main settlement is Port-aux-Français, a collection of shacks housing less than 100 people, bereft of an airport. The only way on or off the island is via the Marion Dufresne, a freighter out of Réunion, 3,490 km (2,169 mi) away. That’s ten days’ sailing, if the seas aren’t too rough.

If you’re tired of tracking satellites, done with taking weather readings, bored with observing the sea lions and albatros, finished with your reading list, and not into hiking across the island, you’re in a bit of trouble.

Or it may be the right time and place to develop your other talents. A talent for drawing perhaps. This cartoon of Kergolus, sent by Mathieu Valleton, currently residing in Port-aux-Français, shows how the peculiar profile of Grande Terre can be transformed into a zoomorphic presence. 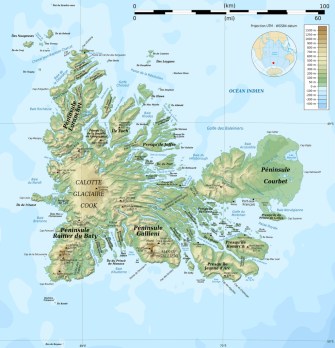 Kergolus is an animal of indeterminate species, although his furriness and quadripedality seem to suggest an affinity with the Mustelidae (a family comprising, among others, badgers, stoats and ferrets). But his peculiar shape was of course suggested by the outline of Grande Terre – so we could say that Kergolus is a native species, unlike all the cats, rabbits, sheep and reindeer introduced by man.

Kergolus’s raised tail corresponds with the jagged Loranchet peninsula on the island’s northwest; its dark fur is met with white belly-fur, demurely covering what could otherwise have been a rather graphic refashioning of the Cook Glacier.

The hind legs are represented by the Rollier du Baty and Gallini peninsulas, while the front ones are the Jeanne d’Arc and Ronarc’h peninsulas. The giant snout is the Courbet peninsula, while the mouth corresponds with the Presqu’île du Prince de Galles [4].

Clearly, Kergolus is meant to represent Kerguelen. But was he a mere doodle, or did he fit into a grander scheme of things? We will probably never know. Mr Valleton reported that “apparently [Kergolus] was drawn by a girl called Julie in 2007 on the Geophysics team. It is difficult to have more information, as memory fades fast here (nobody stays more than one year, and it’s already been four missions).”

Which makes Kergolus a lonely creature in more than one sense. Not only is he far removed from the rest of the world (and from other geo-mascots), but also from his creator, and his purpose.

As a bit of a Kerguelen-enthusiast myself, I was very happy to hear back from Mathieu, answering some of my follow-up questions:

“Like almost everyone, I am at Port-aux-Français, on the north coast of the ‘Gulf of Morbihan’ (which probably owes its name to its resemblance to the Gulf of Morbihan in Brittany). This is the only permanent settlement on the island nowadays. It does feel isolated, especially when everybody is in the same room (for lunch, for example) and the wind is blowing outside… It is nothing like New Amsterdam or Crozet, though: we are about 60 in Kergelen, but they are only 30 on these islands.”

“Outside Port-aux-Français, about 50 shelters are present in different places in Kerguelen, five of which are very often used (Port-Bizet, île Mayès and île Verte are almost permanent settlements with three persons all year long, Ratmanoff and Korrigans are regularly used) while the others may be used only once every other year, or less. It just depends on whether someone has anything to study there (cat population, birds, mice, plants…).”

“Right now the weather is quite nice, summer is approaching and the wind has been quiet these last days, one can even go out just wearing a t-shirt at times.”

“The feral cats are rarely seen, except for those who live at the base and are almost domesticated. Most cats are really wild animals, more so than the rabbits (which are everywhere, and do much damage to the ground) or even the elephant seals laying on the streets. Kerguelen cabbage is a protected species and we are forbidden to eat it… although of course, every year people do try to prepare some. It is said to have a terrible taste!”

“Archeology is limited, since the island has not been inhabited for a longtime, and never by permanent inhabitants. There are however a few places of historical interest, Port-Jeanne-d’Arc was a whaling harbour from 1906 to 1922, and Port-Couvreux where there was an attempt to raise sheep (which failed). These places have already been studied and I don’t think they are still an interesting archeology subject, but of course they are very interesting to us, and most people try to visit them at least once during their stay.”

“Basically, the people from the Polar Institute people are here for one year, and the others (administration, Météo France, CNES space agency) for six months.”

Mathieu’s tour of duty was slated to end in 2012, so he should still be out there. To him, and all the other scientists on that windy piece of real estate: as they say in French – bon vent!

[2] The archipelago in its entirety, sometimes also referred to as the Desolation Islands,  is one of five districts in France’s Territoires australes et antarctiques françaises (TAAF), or ‘Southern and Antarctic Lands’. The other four are: St Paul and Amsterdam Islands (a single district), Crozet Island, the Scattered Islands (îles Éparses) surrounding Madagascar, and Adélie Land (Terre-Adélie), the slice of Antarctica claimed by France.

[3] Translated into English as ‘The Arch of Kerguelen: Voyage to the Islands of Desolation’. Kauffmann was held hostage in Beirut (1985-1988); his fellow hostage Michel Seurat died in captivity. Incarceration and isolation, though rarely linked expressly to his experiences in Lebanon, are recurring themes throughout Kauffmann’s work, for which he was awarded the Prix de la langue française in 2009.

[4] Prince de Galles is French for Prince of Wales. But what does Presqu’île translate to? If ‘peninsula’, then what with péninsule? English, in this case at least, is apparently less vocabulous than French, which has developed a precise word to denote a particular kind of peninsula, i.e. one relatively small in size, and attached only barely to the mainland, so that it is really less of a peninsula, and almost an island (presqu’île).

Photosynthesis is powerful but very inefficient. Humans can improve on this biochemical process to help the planet.
Up Next
Guest Thinkers

Ecobricks: How Sand and Bacteria Could Save 800 Million Tons of CO2 Annually

1.3 trillion bricks are manufactured each year worldwide. 10% of them are made by hand in coal-fired ovens, emitting on average 1.4 pounds of carbon per brick or 800 million […]