It had been ages since I’d been in Shoreditch – West Londoners generally never stray east of Tower Bridge – but visiting relatives were determined to inspect the cool clubs and hip shops of the area. One of the former is 333, a nightclub the outside of which is currently emblazoned with the artwork of Chilean graffiti artist Otto Schade. One wall decorated by Schade consisted of this rather strange map of the British Isles (1).

Schade’s work is very, well, ribbony. A portrait of Marilyn Monroe on another wall is reminiscent of one of M.C. Escher’s lithographs. This map is equally ribboned, but also animate, giving the whole an eerie feel, as if the islands had their skin flayed to be put up in a cartographic version of the rather creepy Bodyworlds exhibition.

Eyes are peeping through the contorted maps of Scotland and Ireland, as if the larger island of Great Britain is a parent, speaking to its child, Ireland. It’s hard to determine whether parent and child are angry or scared. 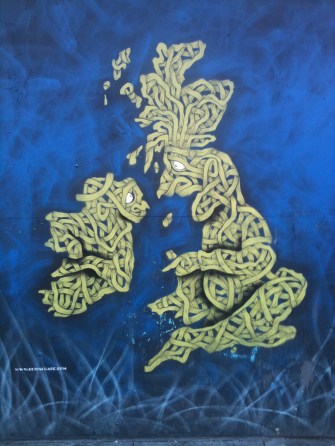 The British eye is placed somewhere near Glasgow. The tip of the nose is the Mull of Galloway, Scotland’s southernmost point, wedged between the Firth (2) of Clyde to the north, and the Solway Firth to the south, giving shape to the rest of the nose. The source of the Solway Firth is the mouth of the British creature (looking vaguely Entish, come to think of it), while Morecambe Bay in combination with some expert ribbonwork gives the impression of a chin.

More ribbonwork, spanning from the centre of the country into northern Wales, simulates an arm, ending in a tut-tutting finger, a.k.a. the Llŷn peninsula (just south of Anglesey, current residence of the newly-wed and newly-titled Duke and Duchess of Cambridge). Ribbons further south simulate a kangaroo-like leg out of England’s southwestern tip (i.e. Cornwall and Devon).

Ireland is sheepishly listening to Britain, its arms half-folded over each other. One elbow is the peninsula of Dún Chaocháin on the coast in northwestern county Mayo, the other is near Rosslare in county Wexford, in Ireland’s southeastern corner.

So what is Britain telling Ireland? All we have to go on, is the title of Mr Schade’s work, which is UK Internal Conflicts – a title that is not very likely to endear this work to the Irish. This week marks the first visit of a British sovereign to the independent Irish Republic ever. It also marks the first bomb threat in London by an Irish republican dissident group in many years. In Anglo-Irish relations, the past, it seems, is never really past.

(1) ‘British’ is more than a political toponym, describing the territory of the United Kingdom of Great Britain and Northern Ireland. It is also a wider geographical term, including all the islands in the group, including Great Britain and Ireland (and thus also the politically independent Republic of Ireland). However, political sensitivities are helping the term ‘British and Irish Isles’ find more and more purchase.

(2) A firth is a Scots word to describe a large body of sea water (cognate with the Scandinavian term fjord).

Japan has had a quite a year within geologic activity – some of it very tragic, some of it less so. Volcanically, both Sakurajima and Kirishima have put on shows […]