Japan has had a quite a year within geologic activity – some of it very tragic, some of it less so. Volcanically, both Sakurajima and Kirishima have put on shows that captured the attention of the world. Now it seems that another Japanese volcano might be joining the list for 2011. The Japanese Meteorological Agency (JMA) raised the alert status today to Level 2 (from 1) for Mt. Aso on Kyushu Island. Since Friday, Nakadake at Aso produced a small, 500 meter / ~1,600 feet steam-and-ash plume (video) with minor explosions.

Aso itself is, much like Kirishima, actually a complex of volcanoes within a 24 km caldera (see the stunning image below). The current activity is centered at Nakadake, a popular hiking destination that has had some problems with volcanic gas emissions. Nakadake is the most active vent amongst 17 within the Aso caldera, producing numerous small VEI 1-2 explosions over the last few centuries – some of which have lead to fatalities. However, the Aso caldera has had larger eruptions that produced significant pyroclastic activity including a number of VEI 3 eruptions that have left noticeable ash layers. Phreatic and phreatomagmatic eruptions – interactions with water – are common at Nakadake due to the small crater lake found at the volcano (see top left).

There are a multitude of webcams pointed at Aso – so you can see if you can check out any of the action if the volcano does start erupting more vigorously. Aso does have an associated volcano observatory at the University of Kyoto, but there is current no English version. 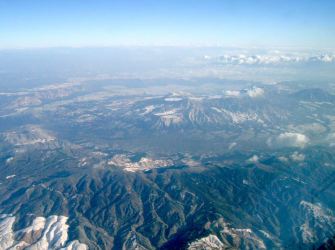 The Aso caldera in Japan seen from the air. Click here to see the original image.

We don’t know when or how music was originally invented, but we can now track its evolution across space and time thanks to the Global Jukebox.
Up Next
Culture & Religion

A Million Little Pieces Revisited: Can the Truth Ever Set James Frey Free?

The Author James Frey reflects on his bestseller A Million Little Pieces, and how he has changed as a writer since his public shaming on Oprah.