Six Scenarios for an Axis Invasion of America

As presented by Life Magazine to its anxious readership in 1942. 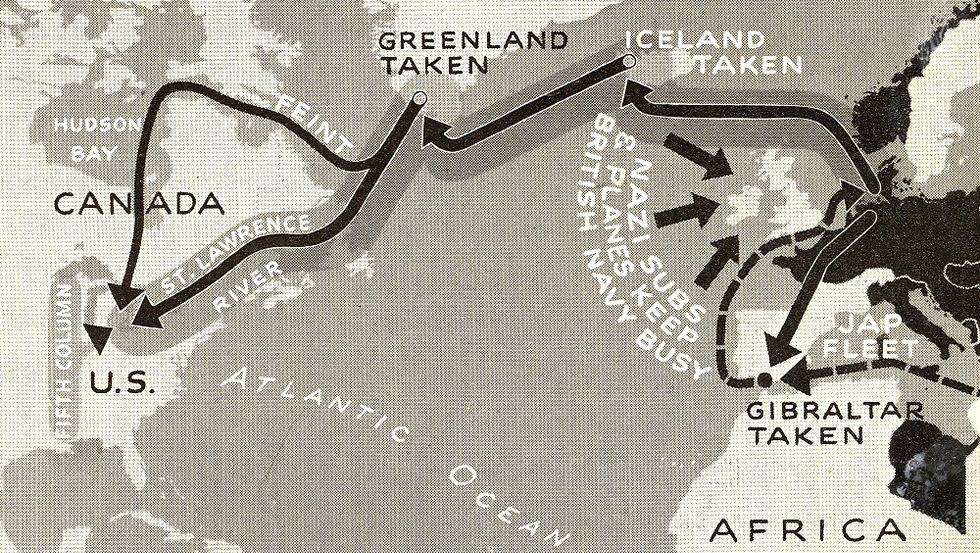 It's early 1942, and the future looks bright for Nazi Germany. Those parts of mainland Europe the Wehrmacht hasn't conquered outright, are held in thrall to Germany by uneven alliances or uneasy neutrality. Out east, German armies are gobbling up big chunks of Soviet Russia in a seemingly unstoppable race towards Leningrad, Moscow and the oilfields of the Caucasus.

So confident are the Nazis of the war's outcome that they've declared war on the US on 11 December of the previous year, four days after their Japanese allies obliterated America's Pacific Fleet at Pearl Harbor.

The Japanese Empire itself is also near the acme of its power, making giant inroads into British, Dutch and American holdings in the Far East, adding to the Empire's conquests in China.

It's unclear - in fact, highly unlikely - that either Germany or Japan had any concrete plans beyond continental hegemony. For one thing, no contemporary maps illustrating global ambitions of the German-Japanese Axis survive (1). But if there ever was a time the Axis might have thought it had a shot at conquering the entire world, this was it.

That terrifying momentum was felt most keenly in the United States, which until recently was half convinced it could sit out this world war on the sidelines. Now a reluctant belligerent, America saw itself caught between two hostile, aggressive powers, one over each coastal horizon.

In those early days after its involuntary entry into the war, panic must have been a palpable feature of the nation's mood. In its March 2, 1942 issue, Life magazine distilled that national anxiety into six maps, each portraying a different scenario for Axis invasion.

Plan One detailed a combined Japanese-German invasion, each hostile power invading via the most opportune shore. Plans Two and Three showed how a solo Japanese invasion might play out, while Plans Four through Six demonstrated various options for a solely German operation.

Below is each scenario, with the original legend in italics.

Plan One (…) attack on U.S. base at Dutch Harbor with all Jap aircraft carriers and the Fleet reinforced by German battleships, presumably giving naval superiority. Japs capture air bases, much as they advanced through the East Indies. Then their land-based planes help the carrier planes to protect the next sea advance down the West Coast. An American fleet flings itself into the fight. U.S. fifth column, heretofore held in reserve, blows up the country. The Japs take the West Coast aviation industry, shipyards and oil wells. Then Germans stab at East Coast.

Plan Two calls for a frontal attack on the West Coast via Pearl Harbor. This is the hard way. Japs supported by carriers first land on the outer Hawaiian Islands, set up air bases and close in on Oahu. More difficult is the big water jump, protected only by carrier-borne planes, to San Francisco.

Plan Three calls for a southern Pacific crossing by Japan. Again the Jap Fleet, reinforced by the Germans, presumably has naval superiority over the U.S. Fleet. Probably first gun would be surprise bombing of Panama Canal, instantly followed by landings in Ecuador.

Plan Four is the much-discussed invasion by way of Gibraltar-Dakar-Natal-Trinidad, which President Roosevelt’s Good Neighbour policy has tried to defend against. It is based on combining the Jap, German, Italian and Vichy navies, freed by the capture of Gibraltar and Suez. They must fight the Allied fleets somewhere. Invasion pours up the Mississippi Valley.

Plan Six is classic invasion down St. Lawrence and Hudson valleys. Germans could readily bomb Chicago, Detroit, Akron and rampage through Midwest. Big catch is getting past British Fleet. On all maps, black arrow alone means a feint; when combined with gray band, it means full invasion.

Maybe it's the benefit of hindsight, but each of these scenarios now looks highly improbable, and more reflective of the acute necessity, for the benefit of the war effort, to transform American angst into American anger. The Japanese taking the Galapagos Archipelago, establishing air bases in Ecuador? A Nazi armada taking New Orleans and trundling up north through the Mississippi valley? A fifth column, supposedly composed of German-Americans and/or Japanese-Americans, aiding the enemy? Really?

Many thanks to Graham Clayton, John O'Brien, and Mark Whybird, who all sent in this map. Its original context is here on Ptak Science Books. For a map of what America might have looked like after a successful Axis invasion, see #700.

(1) Not to my knowledge, at least. I would gladly be proved wrong.