Google any word, and the search engine will suggest a longer phrase, based on the popularity of current searches starting with the same word.

This so-called autocomplete function (1) is,  like any good advice, in equal parts helpful and annoying. Also, being a clever piece of statistics, it offers a fascinating insight into the mind(s) of the Great Online Public. As this small experiment shows:

In the phrases below, the first two words are mine, the rest are some of the most popular suggestions by autocomplete.

I want to be a billionaire

I want to die

I have a dream

I have no friends

can you freeze cheese

The same principle of random revelation can be applied to geographic terms, which is exactly what this map does. These United States of Autocomplete have been collated simply by typing in the name of each US state, then plotting the autocompleted results on an actual map of the US. 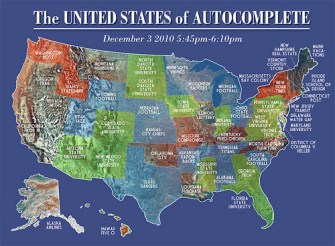 One immediately obvious observation: sports fandom and college life dominate the US of Autocomplete. The blue states, mainly in the South, West and northern Midwest, refer to specific sports (e.g. Alabama football) or specific teams (like the Minnesota Vikings, or Utah Jazz [2]).

The green states all refer to important educational institutions in each of those states – quite often a State University (as is the case in both Dakotas, Florida, Iowa, Arizona and Pennsylvania). The green states are concentrated in the Southwest, the Mid-Atlantic states and northern Midwest.

Four states, in red, refer to semi-eponymous newspapers. Ironically, one of these newspapers is based on the opposite coast of the state that it autocompletes: the Washington Post’s offices are in DC, on the eastern seaboard, nowhere near the state of Washington, in the Pacific Northwest (3).

None of the other states are grouped together by colour, as they present a mixed bag of results. The state of Kentucky is autocompleted to refer to the fast food chain that bears its name, while Maine apparently resonates chiefly as a holiday destination.  Those who feel lucky, play the Illinois Lottery, those who feel rich look for New Hampshire Real Estate, those who feel frisky look for Montana Fishburne (the adult actress, and daughter of Laurence Fishburne).

If you didn’t already think that school kids are responsible for most that goes on in the intertubes, then you’ll find confirmation of that fact in a few results that are likely subjects for a history paper: the Missouri Compromise, the Louisiana Purchase, the Massachusetts Bay Colony and the Oregon Trail.  Nevada Smiths, on the other hand, is a New York City-based sports bar styling itself as “the world’s most famous live football venue”. More famous, it would seem, than anything else starting with the word ‘Nevada’.

North Carolina’s autocomplete phrase refers to the state’s apparent high density in furniture outlet stores. Showing how time-specific this picture of the United States is, the autocomplete term for California is  ‘California Prop 19’, referring to Proposition 19, a ballot initiative that would have legalized certain aspects of cannabis use in California, had it not been defeated 53% to 46% on November 2nd.

The Vermont Country Store is an “old-time general store” that is nevertheless also doing brisk business online, apparently.  The two non-contingent states are autocompleted by its airline, and a famous tv series, respectively.

The Autocomplete experiment is addictive (4), and has been repeated for China, the results of which might be a lot less easily recognisable to a western audience. But there are some interesting results. 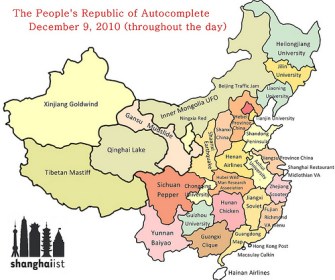 Xinjian Goldwind is a science and technology company, and apparently rather sought after. The Tibetan Mastiff, however, is a local breed of dog. There are lots of references to universities named after provinces, and a few even to the provinces themselves (are these more the more boring provinces?) A few culinary references (Sichuan pepper, Hunan chicken) are hardly surprising, although a direct reference to a Virginia restaurant is somewhat unexpected (Fujian Richmond VA menu).

Many thanks to all those who sent in the US of Autocomplete map: Kevin Axe, Mike Beidler, Bifyu, Victoria Bitters, Miles Brem, Jared Conrad-Bradshaw, Juan Francisco Lehocky, John O’Brien, and John Thorne. The original context for this map, the data for which was collected on December 3rd between 5.45 and 6.10 pm, is this page on Very Small Array, an excellent infographics website that was the source for an earlier Strange Maps (309). The Chinese map was found here on Shangaiist. It’s unclear on which side of the Great Firewall of China its data has been collected.

(1) Not just a Google function, but also of most other search engines, and indeed (down on word-level) of the texting function on most mobile phones, where it is also known as ‘predictive texting’.

(2) Before they moved to their present location: New Orleans Jazz.

(3) Other states’s autocomplete phrases with origins outside the state itself: Kansas City Chiefs (whose stadium is in Kansas City, Missouri), the Delaware Water Gap (on the border between Pennsylvania and New Jersey, where the Delaware river cuts through the Appalachian mountains), and, arguably, Kentucky Fried Chicken (the Colonel was an Indianan by birth, the first franchised KFC opened in Utah).

(4) Although slightly disappointing for Europe, where the top autocompleted searches all seem to end in ‘weather’.

Did you miss the Megalobster, the youth condom, turbine-free wind power, perfect parallel parking, D.I.Y. macroeconomics, the long-life-span Smartphone or the emotional spell-check?