The result would be this disconcerting, disorienting map. In the world described by it, the differences in population density between countries would be less extreme than they are today. The world’s most densely populated country currently is Monaco, with 43,830 inhabitants/mi² (16,923 per km²) (1). On the other end of the scale is Mongolia, which is less densely populated by a factor of almost exactly 10,000, with a mere 4.4 inhabitants/mi² (1.7 per km²).

The averages per country would more closely resemble the global average of 34 per mi² (13 per km²). But those evened-out statistics would describe a very strange world indeed. The global population realignment would involve massive migrations, lead to a heap of painful demotions and triumphant promotions, and produce a few very weird new neighborhoods.

Take the world’s largest country: Russia. It would be taken over by its Asian neighbor and rival China, the country with the world’s largest population. Overcrowded China would not just occupy underpopulated Siberia – a long-time Russian fear – but also fan out all the way across the Urals to Russia’s westernmost borders. China would thus become a major European power. Russia itself would be relegated to Kazakhstan, which still is the largest landlocked country in the world, but with few hopes of a role on the world stage commensurate with Russia’s clout, which in no small part derives from its sheer size.

Canada, the world’s second-largest country, would be transformed into an Arctic, or at least quite chilly version of India, the country with the world’s second-largest population. The country would no longer be a thinly populated northern afterthought of the US. The billion Indians north of the Great Lakes would make Canada a very distinct, very powerful global player. 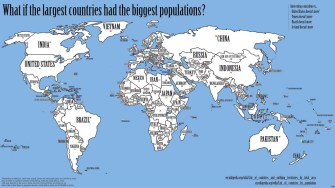 Strangely enough, the US itself would not have to swap its population with another country. With 310 million inhabitants, it is the third most populous nation in the world. And with an area of just over 3.7 million mi² (slightly more than 9.6 million km²), it is also the world’s third largest country (2). Brazil, at number five in both lists, is in the same situation. Other non-movers are Yemen and Ireland. Every other country moves house. A few interesting swaps: 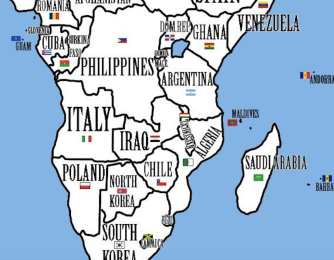 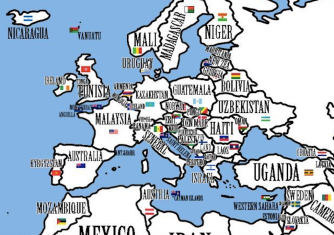 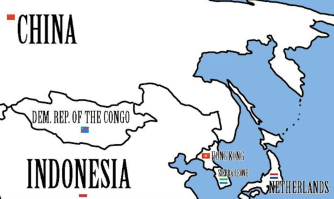 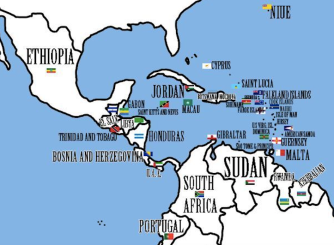 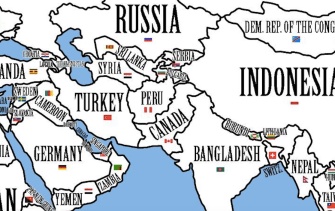 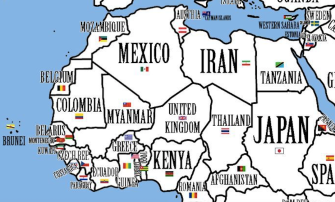 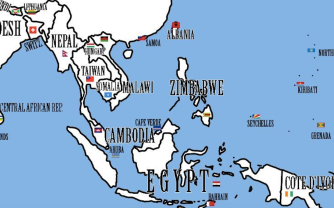 Rearranged maps that switch the labels of the countries depicted, as if in some parlor game, to represent some type of statistical data, are an interesting subcategory of curious cartography. The most popular example discussed on this blog is the map of the US, with the states’ names replaced by that of countries with an equivalent GDP (see #131). Somewhat related, if by topic rather than technique, is the cartogram discussed in blog post #96, showing the world’s countries shrunk or inflated to reflect the size of their population.

Many thanks to all who sent in this map: Matt Chisholm, Criggie, Roel Damiaans, Sebastian Dinjens, Irwin Hébert, Allard H., Olivier Muzerelle, Rodrigo Oliva, Rich Sturges, and John Thorne. The map is referenced on half a dozen websites where it can be seen in full resolution (this one among them), but it is unclear where it first originated, and who produced it (the map is signed, in the bottom right hand corner, by JPALMZ).

(1) Most (dependent) territories and countries in the top 20 of Wikipedia’s population density ranking have tiny areas, with populations that are, in relation to those of other countries, quite negligible. The first country on the list with both a substantial surface and population is Bangladesh, in 9th place with a total population of over 162 million and a density of 1,126 inhabitants/mi² (56 per km²).

(2) Actually, the US contends third place with China. Both countries have almost the same size, and varying definitions of how large they are. Depending on whether or not you include Taiwan and (other) disputed areas in China, and overseas territories in the US, either country can be third of fourth on the list.

(3) Niger, not to be confused with nearby Nigeria. Nor with neighboring Burkina Faso, which used to be Upper Volta (even though there never was a Lower Volta except, perhaps, Niger. Or Nigeria).

(4) The same is said of demography. And of a bunch of other stuff.

Scientists ranked countries on their end-of-life care. The U.S. fared poorly.
Up Next
Guest Thinkers