Maps are two parts truth, one part lie. They ignore one of the world’s three dimensions so they can squeeze the other two onto a flat surface. This distortion, messing up the shape and size of the area depicted, plagues all maps, but is more noticeable on larger ones. Most of all, of course, on world maps.

The Mercator projection, by keeping meridian and parallel lines straight and perpendicular (1), leads to huge distortions of scale towards the poles. The best known example is the size of Greenland, seemingly equal to Africa on a Mercator world map, but only 1/14th of Africa’s in reality.

This particular problem is solved by the Gall-Peters projection, especially developed to counter the ‘cartographic imperialism’ that downplayed Africa’s true size (2). Gall-Peters has its own set of problems, however, as do all attempts to render a spherical object faithfully on a flat map. One could call it cartography’s original sin.

In an ironic twist probably only fully appreciated by mapmakers themselves, this object reverses that central problem of cartography: it projects a regular, two-dimensional map onto a round object. 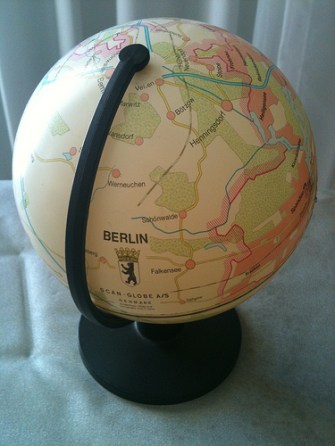 Dating from 1993, this globe depicts Berlin, newly-reunited, as being (on) its own planet.The globe cleverly masks its origin as a 2-D map, making it quite hard to find out exactly where the two outer edges of that map touch each other.

The meridian of Planet Berlin runs through Charlottenburg (just south of the Olympic stadium, the Funkturm and the eponymous castle), slices through the city centre, where it is flanked by the Gedächtniskirche, the Kurfürstendamm and KaDeWe (4) to the south, and the Siegessäule, the Reichstag and the giant TV tower at Alexanderplatz to the north.

The Berlin equator then crosses Friedrichshain, Treptow, Lichtenberg, Hellersdorf, Neuenhagen, Staaken and Spandau before rejoining Charlottenburg. Planet Berlin is quite populated at either pole, with Bernau, Marwitz, Velten and Schoenwalde hugging its ultimate north; and Güterfelde, Ruhlsdorf, Mahlow and Zolten among the localities adjoining its extreme south.

I found this this remarkable cartifact in an antique shop in Aberdeen, WA – a rather unlikely location for German-themed paraphernalia (3).  As attested by its legend, it was designed by cartographer Karl-F. Harig for Scan-Globe A/S of Denmark, who produced it in 1993. Planet Berlin does not reveal anything about why it was made, and what exactly it represents. But one can guess.

Berlin has long felt like a place as exceptional as it was insular: in the 17th and 18th centuries, in deepest rural Brandenburg, it was a cosmopolitan haven for refugees, traders and thinkers from all over the continent. After World War Two, it was an outpost of the West in communist East Germany. From 1961 onwards, West Berlin was bricked in by the communists, lending a particular air of claustrophobia to the entire city – both west and east of the Berlin Wall.

This ‘antifascist defence wall’ (as the East Germans euphemised it) was the ultimate symbol of the Cold War that divided Europe. Its fall in 1989 signified the end of that war, and that division. In those heady days, Berlin was in the eye of a worldwide mediastorm. After German Unification, it again became the capital of an entire nation. Could this globe, placing Berlin on a world of its own, reflect the unique sense of pride and achievement that Berliners must have felt at that time?

(1) Meridian lines circle the earth north-south, through both poles. Parallel lines circle the earth in parallel to the Equator. The actual distance between these lines varies according to their position on the globe. However, the Mercator projection keeps these lines equidistant and perpendicular – mainly for the benefit of shipping: this way, courses of straight sailing (known as rhumb lines, or loxodromes) may be represented by straight lines on a map.

(2) The hugeness of that continent in comparison to other parts of the world has been discussed earlier on this blog (see #35), and more recently has given rise to a similar map, designed by Kai Krause and sent in by several readers (here, hi-res version here)

(3) An unremarkable, somewhat run-down town on the Pacific Coast of the northwestern US, Aberdeen’s main claim to fame is as the hometown of Kurt Cobain, hence its epithet as the Birthplace of Grunge. A sign at the city limits invites visitors to Come As You Are.

(4) KaDeWe is the Kaufhaus des Westens, one of Europe’s biggest department stores.

Getting kids to eat their vegetables has been one of the age-old frustrations of modern parenting. While much has been said about causality – from the enormous advertising budgets poured […]