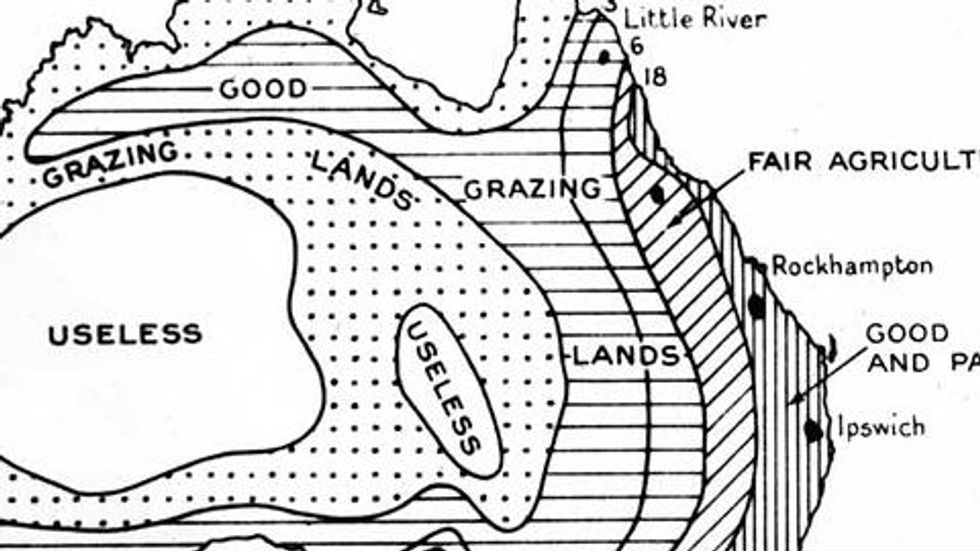 “Aboriginal Creation myths tell of the legendary totemic beings who had wandered over [Australia] in the Dreamtime, singing out the name of everything that crossed their path -- birds, animals, plants, rocks, waterhold -- and so singing the world into existence.”

In The Songlines, travel writer Bruce Chatwin tackles the Australian Aborigines’ poetic relation to their land. The titular 'songlines'  are an age-old Aboriginal oral tradition that conveys tribal lore on human origins, local history and Australian geography. These ancestral songs are so indispensible that tribesmen outside the area they sing about literally may be lost for words, unable to describe local flora and fauna, and consequently unable to survive off them.

“The dry heart of Australia [...] was a jigsaw of microclimates, of different minerals in the soil and different plants and animals. A man raised in one part of the desert would know its flora and fauna backwards. He knew which plant attracted game. He knew his water. He knew where there were tubers underground. In other world, by naming all the 'things' in his territory, he could always count on survival.”

But songlines also transcend local relevance - a line started in one part of the country might end hundreds of miles away, sung in another, unintelligible language. This system of navigation by narration is of a complexity that belies the first-contact view of the Aboriginals as mere Stone Age savages. It is also too big for a single book, and accordingly, Chatwin’s treatment is anecdotal rather than comprehensive, resulting in a narrative that itself resembles a songline: full of fascinating twists, turn-offs and dead-ends.

“[...] it struck me, from what I now knew of the Songlines, that the whole of Classical mythology might represent the relics of a gigantic 'song-map': that all the to-ing and fro-ing of gods and goddesses, the caves and sacred springs, the sphinxes and chimaeras, and all the men and women who became nightingales or ravens, echoes or narcissi, stones or stars--could all be interpreted in terms of totemic geography.”

If the Old World was ever described by such a set of songlines, they have long since vanished in the stark glare of a more utilitarian geography -- one also applied to Australia in this Habitability Map, drawn up in the 1920s. Habitability (here meant to signify the degree to which certain areas can sustain a modern, sedentary lifestyle) depends upon the agricultural qualities of the land. This map also takes into account the presence or proximity of coal fields, as these will also invite exploitation, and therefore settlement.

The map is divided into several zones of equal habitational value, separated by contour lines (or isolines) better known for delineating temperature and elevation. Good agricultural and pastoral lands hug the south-western and eastern coasts, gradually degrading towards the middle of the continent via fair agricultural lands and good grazing lands to sparse grazing lands.

In the central part of Australia, the non-shadedness of two fields denotes their total unfitness for habitation. They are unequivocally labelled: Useless.

This map reflects the theories of professor Griffith Taylor of the University of Sydney, who in the 1920s argued that the settlement of Australia be limited to its non-tropical coastal regions. In a sense, prof. Taylor was right. Today, 90% of Australia's population lives within 50 km (31 mi.) of the coast, mainly in the areas vertically shaded on this map. The country's interior is devoid of settlement, and almost uninhabited.

But prof. Taylor was also wrong, not in the least from the viewpoint of the Aborigines, who did not view Australia merely as a mainly unarable (93%) and largely ungrazeable continent. In their songlines, even the harshest bits of desert have relevance, and are habitable - if only for their traditional hunter-gatherer lifestyle.

This habitability map was used to support the claim that by the middle of the 1920s, Australia had reached maximum occupancy. It should probably be seen in the context of the geopolitical anxieties of Australia at the time, which saw its small, almost exclusively white population under potential threat of annihilation from the burgeoning masses of Indians, Chinese and other Asians adjacent to its almost empty territory (1).

Prof. Taylor's map could be used to demonstrate that, despite its extremely low population density, Australia was reassuringly 'full'. It therefore transcends a supposedly merely 'scientific' purpose (2). The subtext of this habitability map is reminiscent of a similarly dissuasive map, discussed earlier on this blog (3).

Many thanks to Olli Porkka for sending in this map found here at the National Archives of Australia.

(1) An earlier map discussed on this blog directly addresses the anxieties of 'White Australia' at about the same time. See #380 - White Fright: Asia Looming Over Anglo-Australia.

(2) In the mid-1920s, Australia counted around 6 million inhabitants, today its population is approaching 22 million.