If Europe has one defining cultural characteristic, it is that it has none. This may sound like too neat a paradox, but it’s not that far from the truth. There is not a single state, language, religion or ethnicity that even comes close to dominating the continent as a whole – although at least one in each category at some point in history had the pretension to try (1). Europe’s war-torn history demonstrates that such diversity is, well, divisive. The European Union was designed to supersede the continent’s internecine past, and its continuing appeal (at least to those European countries still outside the EU) is the degree to which it has succeeded, inaugurating an unprecedented period of peace and prosperity (2).

But that does not imply that cultural diversity has been neutralised. The EU, lacking a unifying cultural paradigm similar to the US’s ‘melting pot’, has ended up celebrating a rather bland version of multiculturalism. One example: the buildings on the euro notes are imaginary, in part to avoid fueling national chauvinisms, either of the slighted or boasting variety.

This lowest-common-denominator kind of multiculturalism might actually be the least bad solution. In the kaleidoscope of cultures that is Europe, no matter from where you look at it, you’re always surrounded by ‘the Other’. It takes but a few small steps thence to paranoia, xenophobia, and worse. I remember speaking to a European about the neighbouring ethnicity, literally living up the road. “Oh yes, but they’re all racists,” she said, apparently undefeated by her own logic.

Another solution to dealing with the potential divisiveness of diversity, and if done in good humour at least a lot funnier, is the great European Shouting Match. Let it all hang out! Air that mistrust! Calling each other names establishes three things:

(1) that nobody is exempt, neither from feeling superior to others nor from being looked down upon by others. At least in this, everybody is equal. In the Republic of Mockery, we are all both givers and takers.

(2) that familiarity breeds contempt. Most often, the deepest disdain is reserved for the closest neighbours, from whom distant strangers would have a hard time distinguishing us. Inversely, those distant and/or obscure members of the European family are damned with faint put-downs of the who-the-heck-are-they-variant.

(3) that the sum of these insults says equally much about the nationality doing the shouting, or at least the perception we have of them: Germans are materialistic and utilitarian, the French still dream of la gloire, the British cherish their splendid isolation, etc.

The last map in the order as they are shown here seems to have been created by in June 2009 Yanko Tsvetkov to accompany an editorial in the Süddeutsche Zeitung, the others apparently are variations on that same theme by the Bulgarian-born, London-based designer of the first one. Some of these maps also recently featured in the Daily Mail, at which point they appear to have gone viral, as testified by the large number of readers sending them in (see below). Even though a grain of truth might be mixed in with some of the descriptions on the maps, this blog in no way endorses any of the sentiments they express (3).

Europe seen by the Germans 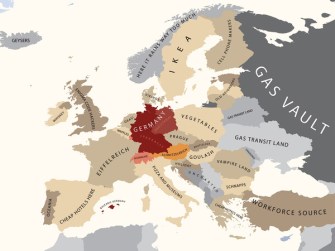 Quite insidiously, the colour toning of this map binds Germany to its linguistically related neighbours, i.e. Luxembourg, Switzerland and Austria. Since World War Two, any such hint at territorial ambitions beyond the borders of the Bundesrepublik is a definite nein-nein. The Swiss are labelled Schokolade (‘chocolate’), the Austrians Schnitzelreich (‘escalope empire’). Reducing other countries to their (perceived) national dish is a very ancient type of put-down (compare the age-old French moniker for the English: les rosbif). Another colour tone difference, this time in Germany itself, is between the former West and East Germanies, the former labelled Sparkasse (‘savings bank’), the other called Proletariat. It reflects the fading, but still powerful division between the prosperous west and the poorer former German Democratic Republic in the east, which has been the beneficiary of billions of euros of government support after Unification in 1990.

Other examples of the culinary dismissive jibe include Belgium (‘waffles’), Hungary (‘goulash’), Poland (‘vegetables’), Ireland (‘whiskey’) and Bulgaria (‘schnapps’). Russia is simply seen as a gas vault, the Ukraine and Belarus as ‘gas transit land’. A crude portrayal perhaps, but not far from the larger, geopolitical truth. Russia is the largest single supplier of natural gas to Europe. Former German chancellor Gerhard Schroeder now sits on the board of Nord Stream, a company piping Russian gas into Europe.

Apart from eating and heating, Germans are also shown to be quite obsessed with Freizeit (‘holiday’ marked across Slovenia and Croatia, ‘cheap hotels here’ in Greece and Spain, its islands transformed in ‘Balearic Germany’). Italy’s label ‘pizza and museums’ acknowledges that country’s culinary and cultural attractions. The Czech republic and Slovakia are referred to merely by the names of their capital cities (Prague and Bratislava), perhaps to reflect their popularity as a citytrip destinations.

Most of former Yugoslavia is labelled ‘uncharted’, while Turkey is reduced to its role as ‘workforce source’ (there are about 4 million Turkish Gastarbeiter and their descendants living in Germany). Of all the other labels, two stick out: ‘Enigma code breakers’ (UK) and ‘old neighbours’ (the Baltics) – two oblique references to the Second World War, the former suggesting some residual resentment, the latter a form of nostalgia. The rather neutral depicition of France as Eiffelreich (’empire of [Gustave] Eiffel, he of the Eiffel Tower) on the other hand reflects the non-animosity between France and Germany that has become the cornerstone of European good neighbourliness and integration.

Europe seen by the Italians 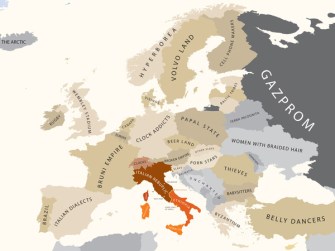 The Italian view of the European continent is alternately ignorant and harsh, with Eastern Europe dismissed as dominated by ‘porn stars’ (Hungary; no doubt a reference to La Cicciolina), ‘thieves’ (Romania), ‘babysitters’ (Bulgaria), ‘women with braided hair’ (Ukraine) and ‘Other Slavs’ (Slovakia). Other latin countries are merely seen as extensions of Italy (France is the ‘Bruni Empire’, Spain is full of ‘Italian dialects’) or of other countries (Portugal is ‘Brazil’). The British Islands are reduced to popular sports (‘Rugby’ for Ireland and ‘Wembley Stadium’, the home of soccer, for the UK). Switzerland is the land of ‘(cuckoo) clocks’, while the Germans pay for their reputation as hard workers with the put-down ‘clock addicts’. Poland still is the land of Karol Woytila, the previous Pope, while Russia, again, is nothing more but a source of natural gas. Turkey is the land not of guest workers but of belly dancers.

Just like Germany, Italy itself is also split in two, also reflecting a dichotomy between a richer half (in this case the north) and a poorer half (the south, labelled ‘Ethiopia’ – Sicily is even called ‘Somalia’).

Europe seen by the Bulgarians 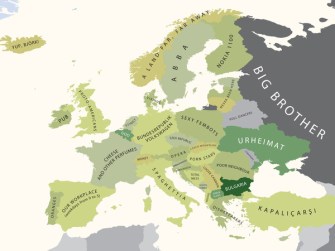 From a Bulgarian perspective, Russia is not the land of natural gas, but of natural alliances (i.e. ‘Big Brother’). Reflecting some theories on the origin and migrations of the Bulgarian people, Ukraine is named their ‘Urheimat’. The Serbs next door have earned a reputation as ‘loose cannon’, while Albania is (expressly?) mislabeled ‘Kosovo’, and Montenegro ‘South Serbia’. Macedonia is called ‘Greek Slavs’, while the Greeks are ‘dish breakers’. Germany and France are reduced to  some of their best-known export products (cars and cheese), while Belgium is seen as the home of the EU, a generous provider of subsidies (hence ‘God’). Poland, bizarrely, is the land of ‘sexy fembots’.

Europe as seen by the French 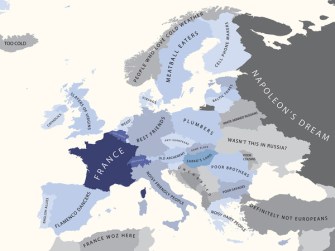 France is portrayed as still recovering from its early 19th-century ambitions of dominating the continent. Hence the labelling of both Belgium and Switzerland as ‘semi-France’, Russia as ‘Napoleon’s dream’, Austria as ‘old archenemy’ and Portugal als ‘English allies’. Other countries are labelled to reflect possible alliances, i.e. Ireland (‘catholics’), Romania and Moldova (‘poor brothers’ and ‘poor cousins’). The faintest praise is reserved for the Germans (‘best friends’ – one can almost hear teeth gnash), while Algeria is still seen with nostalgia: ‘France woz here’. Reflecting a political attitude not shared by some other major European powers, France sees Turkey as ‘definitely not Europeans’. Hungary for once is not seen as a country of pornstars, but as ‘Sarko’s land’, the ancestral country of  France’s president Nicolas Sarkozy.

Europe as seen by gays 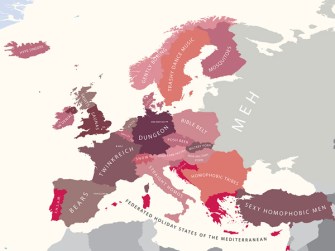 Europe as seen by the British 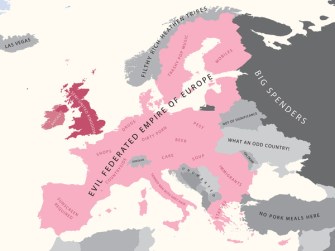 The United Kingdom is famously ambiguous about its European affiliation, let alone about its membership of the European Union. Three elements combine to reinforce Britain’s euroskepticism: its geography as an island nation, the legacy of its overseas Empire and its heroic role as the sole holdout against a continent dominated by the Nazis. Margaret Thatcher tried to steer the European Community in the direction of a purely economic alliance of sovereign nations, but the drive towards ‘ever closer union’ (as mandated by the EU’s own founding texts) has proved inexorable – and very ominous, from a British perspective.

Europe as seen by the Americans 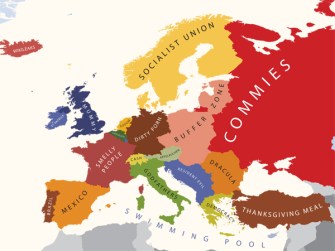 This map offers an external, and even more unidimensional perspective on European diversity. Americans apparently still see Russia (and Ukraine, Belarus and Moldova) as thinly veiled communists, and the Scandinavian countries as one big ‘socialist union’ (it must be a relief for the Danes to be called something other than Vikings, for the Finns not to be reduced to their mobile phone industry and for the Swedes to be linked to something else than Volvo, Ikea or Abba). The Netherlands, soft on drugs, are ‘Sodom’, the Iberian peninsula is dominated by Brazil and Mexico, Italy is simply ‘godfathers’ country, France is full of ‘smelly people’ and the UK is affectionately called ‘mummy’. Ex-Yugoslavia is ‘resident evil’, while Turkey is ‘thanksgiving dinner’. 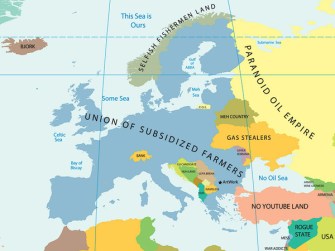 This map seems to be a composite of European stereotypes. Nobody is left out. The EU, in view of its massive agricultural budget, is seen as the ‘Union of Subsidized Farmers’, Russia is a ‘Paranoid Oil Empire’, Ukraine is a country of ‘gas stealers’ and Norway (outside of the EU because independently wealthy) is ‘Selfish Fisherman Land’.

The maps can be seen in their original context at [this page] on Mr Tsvetkov’s website Alphadesigner.

(1) Examples? Off the top of my head, and in corresponding order: the Soviet Union, French, catholicism, the so-called ‘Aryan’ race. These examples are of course non-limitative and debatable (esp. in the case of religion, where it could be argued that Europe was/is overwhelmingly christian, but also that the devastating wars between its sects suggest otherwise).

(2) No armed conflict has ever been fought between member states of the EU (or its predecessor, the European Economic Community). On the other hand, the organisation has proved embarrasingly powerless to stop armed conflict in its own backyard – the Yugoslav wars in the mid-1990s ended only through US-led NATO intervention.

I used to work for a couple of small mortgage lenders a few years ago. We probably closed somewhere between 150 and 200 purchase and refi loans a month at […]